Sands of Iwo Jima(1949) arrives on Blu-ray on Veteran's Day(appropriately enough) November 11, 2014, in the latest release from Olive Films. John Wayne was nominated (but did not win) an Academy Award for his portrayal of Marine Sgt. John W. Stryker in Sands of Iwo Jima, but he would ultimately win the award for best actor in True Grit(1969). Sands of Iwo Jima was produced a mere 4 years after the historical events presented in the film, and benefits from historical footage that is edited into the body of the film. 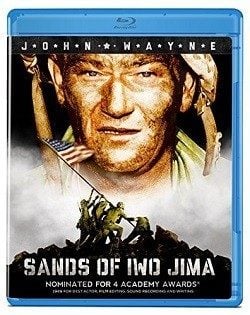 Sgt. John Stryker(John Wayne) is a strict and rigid leader of his men as he trains them in New Zealand. Many of his soldiers hold grudges against him, notably Privates Conway and Thomas. Private Thomas(Forrest Tucker) was demoted because of Stryker, and Private Conway(John Agar) is reluctant to become a career soldier even though he is the son of a Marine colonel under whom Stryker served earlier. Richard Jaeckel(The Dirty Dozen) and Martin Milner(Adam-12) also appear as privates under Stryker's command.The squad gradually learns the reasoning behind Stryker's strict discipline as they become battle hardened during the invasion of Tarawa. Forrest Tucker's Private Thomas slacks off during the invasion, and costs the lives of fellow soldiers and incurs Stryker's wrath. Stryker takes leave in Hawaii following the invasion and we learn more about his personal life and that he has as much heart as any soldier in his command.This all builds up to the invasion of Iwo Jima. Stryker's soldiers are the ones selected to raise the American flag on Mount Suribachi. Three of the actual soldiers involved in that photographic opportunity actually appear in cameos in the film: Rene Gagnon, John Bradley, and Ira Hayes. Several other soldiers who were also present in that invasion play themselves in bit parts.Sands of Iwo Jima was directed by journeyman Allan Dwan. The screenplay by James Edward Grant(Angel and the Badman) and Harry Brown(A Walk In The Sun) was nominated for an Academy Award for best screenplay.Sands of Iwo Jima has actual battlefield footage edited smoothly into the film, which has high production values with hundreds of extras and some actual military hardware. Wayne's role as Sgt. Stryker is a notable role for this actor whose career included many significant screen roles. Sands of Iwo Jima was nominated deservedly for a number of Academy Awards in 1949, even if it did not win the awards. The film does not demonize the enemy, as propaganda films of just a few years earlier were wont to do, and which later films did as well.

Sands of Iwo Jima appear in 1080p on Blu-ray in its original 1:33.1 aspect ratio. The film elements from which this transfer was derived were obviously in very nice condition. Some minor dirt and debris are present but fairly minimal. Blacks are solid with excellent fine detail. Shadow detail is likewise excellent for the most part, although a couple of reels have blacks that are a little too dark resulting in the loss of shadow detail. (This is no more than 10 to 15% of the film. Most of the film does not have this issue.) Film grain is present but not distracting, and detail has not been scrubbed away with grain by DNR. This is a very nice HD transfer of black and white film, even if it does not approach reference level material. Some of the stock footage, consisting of actual battle, is slightly out of focus or diminished slightly in quality, but not to the point of distraction. Fans of this film are not likely to be disappointed by this video presentation.

The DTS-HD mono audio is excellent for what it is. There is no fluctuation in volume or background hiss apparent. Dialogue is always audible and mixed appropriately with music and sound effects so as not to obscure the dialogue. The film score by Victor Young(Around The World in 80 Days, Shane) seems to have surprisingly good dynamic range for being mono audio.

There are no special features on this release.

Sands of Iwo Jima would be a notable film in John Wayne's legacy of film roles, even if he had not been nominated for an Academy Award for this role. The film has a great cast of supporting actors, cameo roles by the real soldiers who fought in these battles, and slick production values that smoothly incorporate real battle footage into the narrative. Sands of Iwo Jima is recommended to fans of war films, the Duke, or both. Viewers who enjoy this film may also enjoy Clint Eastwood's Flags Of Our Fathers for a more modern and less conventional take on these historic events.

One of my favorite WW2 Wayne films. Now we just need Operation Pacific and They Were Expendable.

awesome! I can't wait to watch it. My mother is convinced her father is in the invasion footage.

Never seen this film. Preordered it blindly (it's John Wayne!) and look forward
to watching it over the next week or so.

I simply love this film so my rating for it is much higher than the 3.5 from this review. I can't wait until my BD arrives as it will become an immediate viewing.

Got my BD today and immediately viewed the disc in its entirety. The best looking presentation of the film I've ever seen so this John Wayne fan is very happy. I'll by throwing away the 1998 DVD case, but I'll place the DVD with the Leonard Maltin featurette "The Making of Sands of Iwo Jima" and original trailer with the BD.

And this was the very first film that I ever saw John Wayne....

The film would have been absolutely PERFECT for me except
for this... Worst mustache in any film. It ruined my day. Can't tell you how
disgruntled I am after seeing that piece of hair above that man's lip.
I'll eventually get over it, but it will take time.

It's even worse than Adam's mustache here... For the record (and in my defense) it was a late 30s themed party. It disappeared as soon as the Tux came off...

At least YOU can defend yourself.

That man in that film cannot.

Blu arrived today, though it looks like I'm holding onto that old Artisan DVD for the "Making of" special feature.
You must log in or register to reply here.