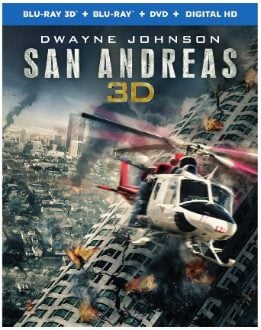 Standard-sized Blu-ray case with a hinged tray to allow accomodation of three disc hubs. Case is in a cardboard slipcover with lenticular 3D cover art attached to front.

In San Andreas, Los Angeles fire and rescue specialist Ray Gaines (Johnson) finds himself at the top of his game professionally, but playing from behind in his personal life. He is in the process of finalizing a divorce from his wife, Emma (Gugino). His daughter Blake (Daddario) is moving away to college in Northern California, and he is clearly troubled by something in his past. Meanwhile, in a classic "good news/bad news" scenario, Cal Tech seismologist Lawrence Hayes (Giamatti) and his team make a breakthrough in their ability to predict earthquakes, but their data indicates that multiple cataclysmic quakes are about to rip through the state of California. When the first quake hits, Ray scrambles in his helicopter to rescue Emma from a collapsing building in downtown Los Angeles. At the same time Blake, who was being driven to college by her Mother's new boyfriend, successful architect Daniel Riddick (Gruffudd) , finds herself trapped in the basement of a collapsing building in San Francisco. Ray and Emma race to San Francisco to try to retrieve Blake, while the surprisingly resourceful Blake, having escaped from the basement with the help of a couple of British siblings name Ben (Johnstone-Burt) and Ollie (Parkinson) Taylor, tries to find a safe haven in the carnage of San Francisco. Their efforts are complicated when Dr. Hayes' team predicts that a second even larger quake is imminent.

From a screenplay perspective, San Andreas is very cookie cutter in its approach to establishing its characters and their motivations. The film leans heavily on familiar tropes of the genre (super competent professional with a mess of a personal life, estranged couple brought together by cataclysmic disaster, scientist who is the only one who knows everything spouting exposition, etc.), but it at least avoids leaning too hard into cliches such as making the ex-wife a shrew or the teenage daughter a completely helpless victim. What saves San Andreas from being lumped in with other lame disaster movies where the characters and plot provide the bare minimum framework from which to hang destructive set-pieces is an above average, charismatic cast.

Taking completely different approaches, there are probably not two working actors better at delivering a "button" line to take an audience out of a scene than Dwayne Johnson and Paul Giamatti. Johnson has a knack for delivering the line exactly the way you want him to, and Giamatti's specialty is delivering the line in a more interesting way than you would expect. Johnson's charisma lets him get away with lines that would fall absolutely flat coming from most actors. There is a joke about "getting to second base" in this movie that every rational thought was telling me should have made me groan, but it was delivered with such aplomb by Johnson (and with such an elaborate laying of set-up track by the filmmakers), that I could not help but chuckle. Giamatti's exposition spouting role is inherently thankless, and there is nothing he can really do about it. The only connection between his character and the main action involving the Gaines family is a reporter played by Archie Punjabi in an even more thankless role. That being said, Giamatti proves to be incapable of simply phoning it in, so he milks his character's two defining traits (science knowledge and foreboding anxiety) for everything they are worth.

The rest of the supporting cast also manages to make the most of the little with which they are given to work. Carla Gugino has an easy chemistry with Dwayne Johnson and they make for a believable on-screen couple. Alexandra Daddario fits squarely in the Hollywood blockbuster tradition of teenagers being played by attractive actors who are closer to 30 than 20, but she also brings some unexpected depth to her character when given the opportunity.

In the end, the filmmakers seem completely aware that their primary obligation is to deliver widescreen spectacle set-pieces of destruction, and Director Peyton and his effects crew deliver this quite effectively. Viewers who get anxious at depictions of massive urban destruction will likely be made very uneasy by the realistic effects in the film. A sequence where Carla Gugino's character goes from having a dinner to running for her life as a skyscraper crumbles around her has one of the more impressive "oner" shots I have seen in quite some time.

The Dolby Atmos audio is encoded into a Dolby TrueHD 7.1 track on the disc. I was only able to screen the film via a 5.1 down-mix of that track and I was still extremely impressed with the clarity, dynamics, and pin-point "directionality" of the mix. This film's action set-pieces are reference material for theatrical surround sound. Hopefully someone with an Atmos set-up can expound further on the mix and its top-notch presentation. [Help me, Adam-Wan Gregorich, you're my only hope!]

Dolby Atmos Update: I watched San Andreas in Dolby Atmos using a 7.2.4 system configuration. While it was a very aggressive mix with a lot of overhead sounds during the multiple quakes, I felt like they could have pushed the ceiling channels more during the helicopter rescue scene that opens the movie. I want to be clear that its a great mix, I just wish they had been more aggressive with some of the helicopter effects. My favorite Atmos moment was when there were a pair of ship propellers overhead and I could hear them churning away above me. -- Adam-Wan Gregorich

When the disc is first played, the viewer is greeted with the following two skippable promos:

Commentary from Director Brad Peyton Runs the full length of the movie and covers a broad, but screen-specific range of topics. Peyton is well prepared and the few times he lapses into simple on-screen narration, he saves it by using the description to transition into a topic relevant to the production and or filmmaker intent.

Scoring the Quake (6:12) focuses on the film's music highlighting various themes from the score and what they were intended to represent. Also discussed are ways that certain unique musical sounds and effects were accomplished. On-camera comments are provided by Composer Andrew Lockington, Peyton, and Flynn.

Deleted Scenes (4:40) are viewable with or without commentary from Director Brad Peyton.

Brad Peyton's San Andreas is almost undone by its by-the-numbers plotting, but an overachieving charismatic cast and spectacular set-pieces of mass destruction elevate it to a very watchable if not ultimately memorable experience. It is presented on 3D and 2D Blu-ray with very sharp video with a slightly desaturated look that I found unappealing but is likely consistent with the film's theatrical presentation. The 3D conversion is an above average effort that really takes advantage of the format in almost every scene. The 7.1 Dolby TrueHD audio track offers impressive clarity, dynamics and dimensionality and is encoded for Dolby Atmos for viewers so equipped. Extras are top-lined by an exhaustive commentary by director Brad Peyton and also include some brief featurettes and deleted scenes.

I just watched this on 2-D Blu-ray.


Ken absolutely nails the overall nature of this film: another lame (in concept & script) disaster film with impressive effects but an even more impressive cast that makes it all fun.


Dwayne Johnson is a lot of fun in a film like this. And the actress who played the daughter--Alexandra Daddario-- really had my attention throughout!


I had a lot of fun watching this--even with those requisite scenes of the earth opening and various people running just in front of the growing cracks in the earth!

Mike Frezon said:
I had a lot of fun watching this--even with those requisite scenes of the earth opening and various people running just in front of the growing cracks in the earth!

That seemed to be a "running" motif throughout the film. The cracks in the earth, on bridges, on the dam, on streets, all had to be run from, and some made it while others didn't.


Anyway, I watched the 3D version last night that I got in a Black Friday deal at Amazon, and the scenes that worked best were ones that emphasized height (where depth of field could really be extended by 3D). Not much in the way of pop-out, of course, but the mixture of the deep picture and really aggressive sound easily had me enveloped in the story throughout.


We had seen the 2D version at the HTF Meet in LA in October, so I was really curious about the 3D version, and it was pretty much what I expected.

Wait! You mean it’s physically possible to include atmos on a non-UHD disc? I thought this was against the laws of physics, since it’s never done by the studios.
You must log in or register to reply here.