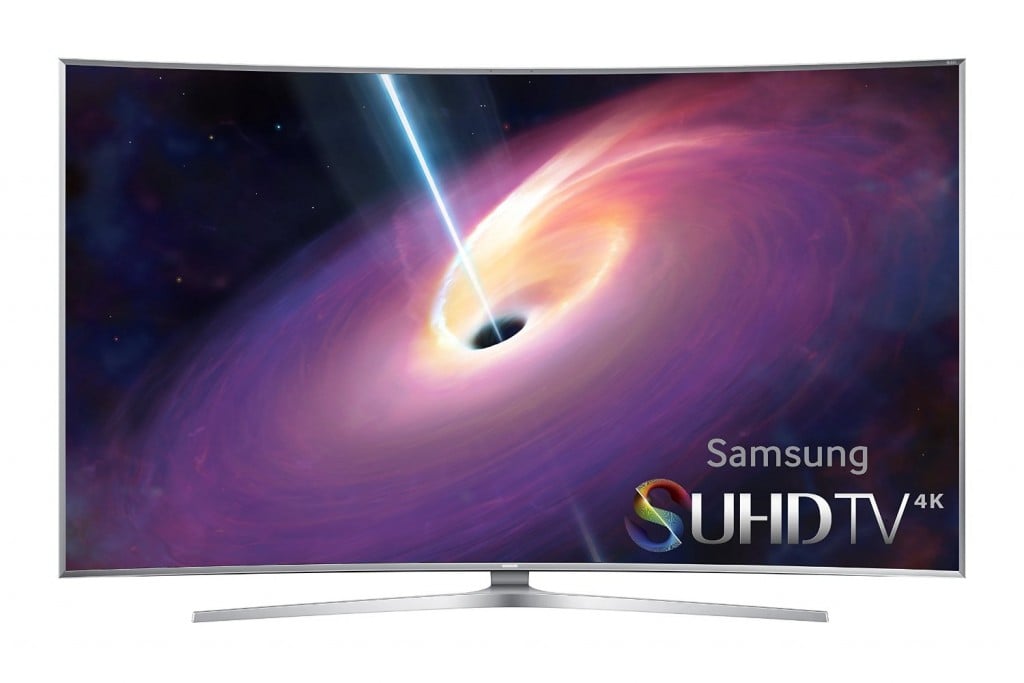 Sitting one model below the top of Samsung’s lineup in terms of features and quality the UN55JS9000 is an UltraHD set with 4K resolution (2160p), and is what Samsung is now referring to as a SUHD display. The S doesn’t stand for Super or anything else specifically, but represents a flagship model for Samsung. SUHD sets feature Quantum-Dot LED technology which expands the potential color gamut of the display – less useful now, but potentially useful for HDR as that content becomes available.

Quantum-dot panels feature individual LED’s that emit blue light, and next to each blue LED are quantum dots that refract a specific color of light when hit by the light from the blue LED. As a result of this, each color is emitted in its purest form, which theoretically results in deeper and more authentic color reproduction. As a result, these are all 10-bit panels and are already loaded with firmware to handle HDR content that is now becoming available, though it should be noted that the 9000 series are edge lit local-dimming, while the 9500 series are LED backlit and offer zone based local dimming.

The UN55JS9000 is also a curved TV, which in my opinion is slightly unfortunate, now please allow me to explain why I use the word unfortunate by beginning this review with a bit of an editorial.

Curved TV’s came out of the woodwork about two years ago in the spring of 2014, with both Samsung and LG offering their own flavors of curved screens that would offer a range of benefits to the consumer. These benefits according to the marketing folks included increased immersion, a wider field of view and decreased reflections from external light sources. Initially this was a way to differentiate early OLED displays, yet the technology swiftly found its way to conventional LED backlit sets. Before long, consumers everywhere began to be told that they needed to get a curved TV to get the optimal viewing experience.

Unfortunately, the touted benefits of a curved TV aren’t nearly as black and white as you might think, though they do exist under the right circumstances.

First and most importantly, while it’s true that a curved TV looks a little larger than a flat TV at a normal viewing distance (a 55” TV looks just under 1” larger) which slightly increases immersion, the curved TV also has a tendency to look pinched in the middle from straight on, which actually decreases immersion. The processing involved in making that curved image work also creates geometry issues when off-axis, which video purists will dislike intensely.

The wider field of view argument is non-starter in my opinion, as you make one half of the screen look significantly worse off-axis, in order to make the other half look better. Third and most importantly the claim that curved TV’s reduce reflections is actually very situational. If the light source is not far to the side, the curve will actually stretch the reflection further, worsening the viewing experience from a flat panel.

Beyond the sometimes substantial price premiums manufactures are charging for curved screens there’s a hidden cost that doesn’t get nearly enough press: space. You’ll note that every marketing image of a curved TV out there is from the front or slightly to the side. Go hunt for a top down or side-on view of a curved set and you’ll only see them on review sites. Why? This is because curved sets are colossal space wasters when wall mounted, measuring an average of 30% deeper at the edge not including the extra distance added by the curve.

At this point you’re probably convinced that I hate curved TV’s and am on a crusade to see them disappear from manufacturer’s lineups, however that isn’t the case. I think there are some specific situations where curved TV’s are truly fantastic – it’s just important to me that our readers understand that curved TV’s don’t always make more sense than their flat counterparts. All that said here are the situations where in my humble opinion, a curved TV absolutely makes sense:

Smart Hub is a great looking platform which functions like the menu system on the majority of Smart TV’s on the market with one exception: it’s a bit buggy. Samsung’s new OS is definitely a refinement over previous versions in most of the ways that matter, but not in the most important one: performance. Many times during my review on multiple different firmware versions, the UI would simply stutter or lag on me while I attempted to navigate menus. Usually this didn’t pose a problem once I was already in the menu or app I was using, but the home screen and initial navigation grew rather frustrating over time. From an aesthetic perspective, the UN55JS9000 is as handsome as its siblings, with thin bezels and a nice brushed aluminum appearance that extends to the included One Connect box. Samsung’s One Connect box remains the brains of the TV, and handles all signal processing as well as switching. Since the One Connect box sits externally from the TV it is upgradeable if hardware revisions ever become necessary, while also offering the added convenience of placing the HDMI ports in a much more accessible location than the rear of a wall-mounted TV set.

The menu system on the JS9000 is full featured, and offers a full color management system as well as 2 and 10-point white balance adjustment.

Upon completing unboxing and getting the TV into position in my office, I pulled out my shiny new SpectraCal C6-HDR colorimeter and fired up CalMan 5.6. Calibration was relatively straight forward, though I did struggle initially getting accurate readings. Utilizing the built in white balance controls I was able to get gray scale dialed quite quickly, and followed up with a full CMS calibration.

Out of the box, Movie mode was quite accurate, with DeltaE 2000 measuring between 3 and 5 across the board. Without touch the CMS the out of the box color accuracy was excellent with an average DeltaE of less than 3, which is imperceptible. Gamma was the one area where the set benefited the most from calibration, raising average pre-calibration gamma from 2.13 to 2.2, which better suits a dark viewing environment. Below are the results of the calibration: In use, the UN55JS9000 is a beautiful display with fantastic color reproduction, though like most edge-lit TV’s, falls a bit short in terms of uniformity and contrast vs a fully back-lit model with zone based local dimming. When displaying a flat black screen, there was some backlight bleed into the panel and some “smudging” that cannot be avoided with edge-lit displays, though it is obvious Samsung has done all they can to counteract these issues.

Note: Smart LED was disabled during my review, as I found the effect to be more negative than positive.

As an edge-lit TV, the UN55JS9000 isn’t capable of the deepest blacks around, but measured a respectable 3568:1 ANSI contrast ratio with Smart LED disengaged, and with Smart LED engaged this jumps up to closer to 4500:1.

At the price Samsung is charging for this set, it’s fairly apparent that local dimming would go a long way to overcoming the shortcomings of an otherwise superb panel, though this may be the major difference between the 9000 and 9500 series.

The UN55JS9000 is a great performer when it comes to motion, with a response time of ~11ms and once in game mode input-lag is reduced to a very acceptable 24ms. Auto Motion Plus is capable of increasing the frame rate of content to 240Hz, though I generally leave this off as the “Soap Opera Effect” doesn’t agree with me. Overall motion handling on this monitor was fantastic, handling 24 and 60FPS sources with aplomb.

The UN55JS9000 benefits from incredibly bright backlit and vivid color reproduction, resulting in a superb 3D experience. Crosstalk was minimal, and due to light levels the image has a great deal of pop and contrast even through the 3D glasses.

Samsung’s PVA panel that they utilize in this series of TV’s is a stellar performer in terms of clarity, with excellent edge to edge uniformity and excellent detail retrieval. Both 1080p and UHD sources looked fantastic, though when sitting extremely close the UHD material really begins to show off how much you are missing at 1080p.

In terms of overall performance there is little to complain about when it comes to Samsung’s UN55JS9000. It offers best in class color reproduction and accuracy, while also being equipped to handle HDR content as it becomes available in the future. Samsung’s engineers continue to improve what is already a highly refined product and I think the result is something that any consumer should look at, with one caveat. My large rant at the beginning of this article about curved screens remains my major caution for buyers. Samsung is charging a significant premium for the curved model of this TV, with the flat version (the JS8500) selling for $1499 vs $1999 for the curved. If you don’t fit the criteria I mentioned above for being a good candidate for a curved screen, I strongly recommend looking at the JS8500 instead, where you can potentially invest that money in a larger TV.

Despite some flaws that video purists will dislike there’s little not to love about Samsung’s latest UHD TV’s, and the Un55KS9000 warrants a spot near the top of any buyer's short list.
Click here to read the original article.
Last edited: Nov 15, 2016

Having bought Samsung's 65inch HU9000 series in August 2014 I cannot stress how great the "One Connect" box concept is. Last November I bought the One Connect upgrade for my set and in addition to several upgrades like the Tizen OS, I now have HDR on my set (and I can see the difference!).

Still waiting for Samsung's 4K Blu-ray player.... my local Best Buy had 8 on release day and they sold immediately within a few hours (as of today Best Buy still doesn't know when Samsung will provide them with new players, they even checked their Florida stores for me and none are available)
You must log in or register to reply here.