1986 was a watershed year for filmmaker Oliver Stone. While already an Oscar-winning screenwriter, he made his first big directorial splashes with two projects released during this year: Platoon (which won him the Best Director Oscar) and earlier in the year with Salvador. Even in this early, guerrilla-styled work, the essences of Oliver Stone’s approach to filmmaking were set: raw, edgy, politically volatile, and with a focus on committed individuals. Salvador didn’t make a dime, but in retrospect, for all its clutter and shapelessness, it’s a gripping work and one that can still make one squirm and sit up and take notice. And that’s basically the response that Oliver Stone seems to want from his films. 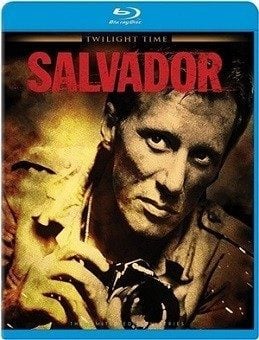 Photojournalist Richard Boyle (James Woods) never has a dime in his pockets and must continually ferret out work where he can get it as a stringer to major magazines and news services. In 1980 with El Salvador exploding in civil war, he (without an assignment from any major news outlet) and his buddy (James Belushi) hop in his dilapidated car and drive to El Salvador to work and play in the country. It’s not Boyle’s first time there, but even his familiarity with the country (on nodding terms with political leaders, a girl friend he left behind, connections with accredited news agents who get him some work) are no guarantee that he won’t be shot on sight by anyone to whom he fails to show the proper respect. While there, he witnesses the horrifying atrocities going on: death squads who wipe out defenseless women and children, a guerilla leader Major Max (Tony Plana) who declares love for his country in television sound bites but plots in secret to eliminate religious leaders and anyone else who stands in his way, and corrupt officials who do nothing without bribes of liquor, electronics, or money. With the help of Newsweek photographer John Cassady (John Savage), Boyle is getting some magnificent pictures which should restore him to good graces back home if only he can get himself and his girl friend (Elpedia Carrillo) out of the country.Based on true events (with the expected editorializing by co-writer/director Oliver Stone), the film may not have a strong narrative focus, but it is undeniably gripping from beginning to end and does reveal truths we are now certain of but at the time were only speculation. Stone spends a fair amount of time in detailing the shameful American involvement in this civil war (especially after the election of Ronald Reagan) down to backing the corrupt regime in power despite the constant violations of human rights going on continuously (once the American troops are given the go ahead from the ambassador to El Salvador – played by Michael Murphy – the peasant revolutionaries who had been winning are suddenly annihilated along with some crucial Americans in the crossfire). Stone, never one to back down from the inherent violence of the situation, shows us a van full of nuns and lay volunteers stopped by guerillas, raped, murdered, and cast into pits. We see innocent people shot on the spot, near-executions spared by only a misfired bullet (one of the most traumatic sequences late in the film as Boyle is about to be executed), and lots of bloodshed and brutality in scenes that will truly haunt the memory. If the personal story of Richard Boyle seems erratically scripted and barely worth following, his professional work and his appeals for common sense to American officials like a hawkish Colonel Hyde (Will MacMillian) and a network news anchor (Valerie Wildman) who never leaves her posh hotel and does her news reports from the roof are much more interesting.James Woods is nearly the whole show in his showboating role of Richard Boyle undeniably earning his Independent Spirit Award and the Best Actor Oscar nomination for his giddy, motormouth, but undeniably passionate and persuasive performance. James Belushi is indisputably funny but completely unnecessary as Woods’ boozy, drug addled disc jockey pal along for the ride. More impressive is the professionalism of John Savage’s earnest photojournalist John Cassady and Tony Plana’s charismatic Major Max. Cynthia Gibb is lovely and ultimately heartbreaking as a volunteer aide caught up in the country’s horrific indulgences while Valerie Wildman as the snooty newswoman and Elpedia Carrillo as Boyle’s lady love add further interest to the predominantly male environment. Michael Murphy’s Ambassador Kelly isn’t given quite enough to do to fully flesh out his character. Will MacMillian offers a typically exasperating performance as the military man who only understands bullets, blood, and battle whether they’re warranted or not.

The film’s 1.85:1 theatrical aspect ratio is faithfully delivered in a 1080p transfer using the AVC codec. Color is nicely hued and mostly realistic apart from occasional skin tones which get too pink. There are inconsistencies also with sharpness (generally excellent but occasionally soft) and contrast (mostly good but sometimes a bit too milky). Black levels likewise vary a bit, and there are some occasional dust specks though they aren’t ever major distractions. The film has been divided into 12 chapters.

The disc offers DTS-HD Master Audio 1.0 and 5.1 sound mixes. For the purposes of the review, the surround track was used more frequently. It’s a strikingly effective mix with good depth in the low frequencies and some unexpected pans across the soundstage at various intervals. Georges Delerue’s music gets excellent consideration in the spread through the front and rear channels, and dialogue is always easily discernible and has been placed in the center channel. The 1.0 mix is likely the one heard in theaters where the film briefly played and it's a solid if unspectacular listening experience.

Audio Commentary: Oliver Stone contributes one of his usual laid back talks on one of his works, interesting even with the stop and go nature of his comments and always honest about what he considers strengths and weaknesses of his work and the work of others.Isolated Score Track: presented in DTS-HD Master Audio 2.0 stereo.Into the Valley of Death: The Making of Salvador (1:02:52, SD): an excellent reminiscence on the production of the movie with discussion from director Oliver Stone, co-writer Richard Boyle, U.S. Ambassador to El Salvador Robert E. White, and stars James Woods and James Belushi.Deleted/Extended Scenes (27:47, SD): seven deleted/extended scenes are presented in montage.Theatrical Trailer (1:58, SD)MGM 90th Anniversary Trailer (2:06, HD)Six-Page Booklet: contains color stills from the movie, original poster art on the back cover, and film historian Julie Kirgo’s celebratory essay on the movie.

Made for only $2 million, Salvador squeezes a tremendous amount of drama and thrills from that meager amount of production money and earns a solid recommendation. The Blu-ray offers very good picture and sound and a nice selection of bonus features to sweeten the deal. There are only 3,000 copies of this Blu-ray available. Those interested should go to www.screenarchives.com to see if product is still in stock. Information about the movie can also be found via Facebook at www.facebook.com/twilighttimemovies.

Could you look at the disc size and tell me if it's identical to the German edition for the main movie.

Hopefully someone else who has the disc can help you with that identification. My players don't have that kind of information at the ready, and I don't have a Blu-ray drive in my computer.

Hi. I was wondering if anyone knows how this compares to the German BD that can be seen here -http://www.dvdbeaver.com/film3/blu-ray_reviews55/salvador_blu-ray.htmIs it worth shelling out the $30 for the TT disc or are they the same? Regards.

xRighteous said:
Hi. I was wondering if anyone knows how this compares to the German BD that can be seen here -http://www.dvdbeaver.com/film3/blu-ray_reviews55/salvador_blu-ray.htmIs it worth shelling out the $30 for the TT disc or are they the same?Regards.
Click to expand...

I imagine both are taken from the same film scan but one might ( big might ) have a better encode than the other.

FoxyMulder said:
I imagine both are taken from the same film scan but one might ( big might ) have a better encode than the other.
Click to expand...

As someone who bought the TT blu-ray, I can also wager that these probably share the same source transfer.
You must log in or register to reply here.