Rush races onto Blu-ray in an edition that offers roaringly good high definition picture and sound. The movie itself is an effective, if simplistic, retelling of the Formula 1 rivalry between James Hunt and Niki Lauda in 1976. There’s a quiet sense of the period, and a fairly strong performance by Daniel Bruhl as Lauda which gives the movie its teeth. The Blu-ray offers some deleted scenes and about 50 minutes worth of featurettes to balance out the package. Formula 1 fans and Ron Howard enthusiasts will certainly enjoy this movie. Based on the strength of Bruhl’s performance and the overall effectiveness of the movie, this Blu-ray is Recommended for purchase or rental. 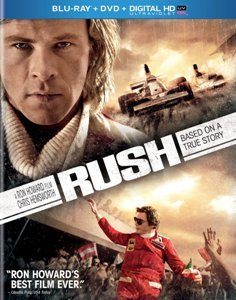 Rush is presented in a 1080p AVC 2.40:1 transfer (@ an average 32 mbps) that presents the movie in solid high definition detail. A variety of environments are presented, including multiple racetracks in multiple weather conditions. A fleet of F1 cars are presented, including some with intentional and appropriate tire damage that can easily be spotted on the transfer. The helmet cams used for some of the racing shots provide some extreme close-ups of Hemsworth and Bruhl, with the background speeding by in real time. In short, this is a well-shot movie that gets an excellent transfer onto Blu-ray.

Rush is presented in an English DTS-HD Master Audio 5.1 mix in English (@ an average 5.0 mbps, up to 5.6 mbps), which blasts through the speakers of the home theater. This is one heck of a mix, to put it mildly. Just don’t listen to this movie at full volume late at night in any room with common walls… The Blu-ray also includes a Spanish DTS 5.1 track, and an English DVS track.

The Blu-Ray presentation of Rush comes with about an hour’s worth of special features, including 11 minutes of deleted scenes and about 50 minutes of featurettes. The Blu-ray packaging also includes the DVD of the movie, which holds the movie, the deleted scenes and a single featurette.Deleted Scenes – (10:49 Total, 1080p) (AVAILABLE ON DVD & BLU-RAY) – Ten short deleted scenes are included here, mostly just fleshing out a little more of Hunt and Lauda’s journeys along the way. One scene includes a detail mentioned by Ron Howard elsewhere in the special features – that Lauda had a masseuse travel with him as part of his entourage.Race for the Checkered Flag: The Making of Rush – (31:39 Total, 1080p) (FIVE PARTS EXCLUSIVE TO BLU-RAY, ONE PART INCLUDED ON THE DVD) – This is an assembly of 6 smaller featurettes about the making of the movie, starting with Peter Morgan’s thoughts on the creation of the script, and ending with a 7:25 featurette on Ron Howard’s work. There’s a lot of material covered here regarding period details and what it took to recreate all these F1 races. In a very clever move, it turns out that Ron Howard’s production team staged all the pit-stop and stands-area scenework at a single location in England, redressing the decorations each time to be a different racetrack. For the actual racing footage away from the stands, THAT would be shot at a new location. But the finish line area, and anything that was generic, they were smart enough to stay in one location. As Howard notes in his featurette, this gave each day an interesting difference – that they would have one day to do the German racetrack or the Brazilian racetrack, before they would need to redress the whole thing to be a completely separate place the next day. The Ron Howard-centered featurette, Ron Howard: A Director’s Approach (7:25), is the only one to be included on the DVD.The Real Story of Rush – (18:33 Total, 1080p) (EXCLUSIVE TO BLU-RAY) – This is an assembly of 3 short featurettes, each dealing with either the reality of the F1 races, or with the efforts of the filmmakers to capture it. One featurette includes some good interview material with the real Niki Lauda, conducted at some point during the movie’s filming. The final featurette, The Rock and Roll Circus, includes some amusing comments from Ron Howard about his recollections of the 1970s while he was an actor on “Happy Days”.DVD Copy – A second disc is included in the package, holding the standard DVD of the theatrical cut, presented in standard definition in an anamorphic 2.40:1 picture with Dolby Digital 5.1 sound in English and Spanish. (448 kbps). The DVS track is also included. The special features on the DVD are the ten deleted scenes and the Ron Howard: A Director’s Approach featurette.Digital Copy – Instructions are included in the packaging for downloading a digital copy of the movie to your laptop or portable device.Subtitles are available for the film and the special features, in English and Spanish. A full chapter menu is available for the film.

Rush is an entertaining movie and a solid dramatic presentation of 1970s auto racing from director Ron Howard and writer Peter Morgan. It takes a few easy outs, but there are some very strong moments along the way, particularly regarding the unapologetic presentation of the rough edges of the main characters and a bracing performance by Daniel Bruhl as Niki Lauda. The Blu-ray offers top-notch high definition picture and sound, and about an hour’s worth of special features. It’s a great Blu-ray that will please fans of Ron Howard and auto racing in general. I am pleased to Recommend this title for purchase or rental.