Actor William H. Macy makes his feature film debut with Rudderless, a tale of tragedy that is ultimately a hopeful story, elevated by strong performances, a powerful surprise, dramatic influence, and a memorable music presence. The story surrounds broken and damaged souls trying desperately to heal, not knowing how, and making mistakes on the way, and though heavy at times, it draws the audience into the lives of the characters and is able to find the right mix of playfulness and humor to naturally poke through the weight of the drama from time to time. 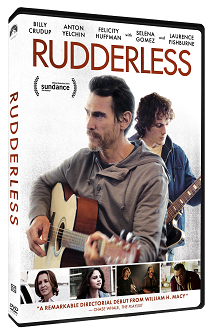 “If you want to act like Josh never existed, great, but make no mistake, you ARE hiding.”

When his son is lost in a tragic school shooting, Sam, a successful advertising executive, spirals into a cycle of booze and self-destruction. Finding himself alone, living on a boat, still under the spell of the bottle and working as a house painter, he discovers his late son’s recordings of songs, and begins to claw his way back from the edge. Eventually finding courage, he performs one of the songs at a local bar’s open mic night where a young musician in the audience is captivated by the power of the song. Soon they have formed a small band and become unlikely local music sensations.

"That song was awesome. There have to be others. Someone ought to play them...we could play them..."
- Quentin, played by Anton Yelchin, to Billy Crudup’s Sam.

Rudderless, the effective, rich directorial debut of actor William H. Macy, begins with the heavy, all-too familiar tragedy of a school shooting, and becomes at first an examination of unrelenting grief. The aftermath of the tragedy is shown as a period of discomfort and pain, where the story establishes the shaky ground upon which Sam, superbly played by Billy Crudup, finds himself grappling with his shock and sorrow. Macy allows this portion of the story to breath, getting the small details right; awkward pauses around the grieving at a wake, wordless responses to questions people don’t know how to answer. Macy’s awareness of how people act and react dramatically grounds these moments and add even greater meaning to the events later in the film. The story then jumps ahead two years, where Sam is at an emotional low-point before he discovers his late son’s music recordings, and allows himself the possibility of clawing free from his period of self-destruction.

Billy Crudup’s Sam is the emotional center upon which the accretion of a dream, or rather the emergence of a rebuilt life following its total shattering, emerges. His journey is the core of Macy’s emotionally powerful redemptive drama. And Crudup’s performance is sublime. Earnest, honest, ably conveying a great deal through staid stairs and heavy silences, Crudup delivers a performance of incredible depth, often through saying precious little. Crudup plays off the energy and nervousness of Anton Yelchin’s Quentin very well, even as their unlikely pairing begins with the young Quentin trying desperately to make something of the opportunity.

The music in the film is exceptional. The song’s Sam discovers of his late son, Josh, were written by Simon Steadman and Charlton Pettus, with Ben Limpic, and is supported with a score from Eef Barzelay. The music, by design, is potent, with a catchy pop sensibility, meaningful lyrics, and emotional heft in the quieter moments. Macy wanted not for independent and wholly original songs art house songs, but rather music that would be familiar, yet original within the context of the story. That’s quite the balancing act, and through a clearly strong musical talent, succeeds triumphantly. You’ll find yourself taken by the songs long after the credits have rolled (and heading to Amazon or iTunes to snag a copy of the soundtrack, most likely.)

You’re my right hand man. Could I make you understand?

William H. Macy, who takes on a small role as the owner of the open mic bar, has crafted something emotionally resonant for his first time behind the camera (he has, of course, directed for the stage,) and displays a proclivity for the storytelling, dramatic understanding, and technical demands of commanding the director’s chair. With great fortune in gathering this cast, with Billy Crudup showing exceptional skill and restraint, Anton Yelchin driving with energy, and other players, such as Laurence Fishburne, comfortably supporting the film, Rudderless is a terrific little film.

The DVD presents Rudderless in its original theatrical aspect ratio of 1.85:1 and the image is pleasing, with good detail, natural color palette (though hues more grey/brown for the nighttime performances,) and flesh tones, and no evidence of unwanted digital sharpening. This is a solid presentation.

The audio for Rudderless shines during the musical moments, with strong fidelity in the strumming guitars and vocal performances from the lead actors themselves. The surrounds aren’t as strong as expected during the live performances, but that proves to be a minor knock. Vocals in the center channel and the full body of the songs come alive in the front channels and prove the songs to be smart and catchy.

Hear This Song: A 12 minute look behind the scenes featuring interviews with Director William H. Macy and the principle cast members.

“Hold On” Music Video with Selena Gomez and Ben Kweller: Short music video for “Hold On,” a key song from the film.

Deleted Scenes: A small collection of deleted scenes from throughout the film.

Finding success at Sundance, and welcomed by audiences, Rudderless will surprise you. Anchored by Billy Crudup’s performance, the film delivers an emotionally rich experience set to a marvelous soundtrack. William H. Macy’s directorial debut, a film for which he also co-wrote with Jeff Robison and Casey Twenter, is confident and assured, delivering dramatically and establishing itself as a welcome down-payment on what Macy can deliver from behind the camera in the future.