You have to feel a little bad for in-wall speakers. They can be made with the highest-quality components and yet will never sound as good as their boxed brethren for two reasons: 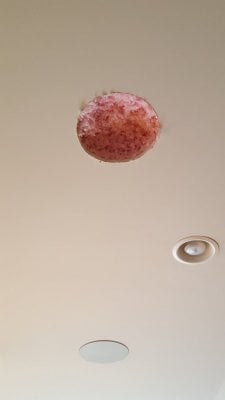 But at least in-wall speakers have it better than in-ceiling speakers, which sit in an infinite baffle “cabinet” and can only fire down on the tops of people’s heads from a height of, what, eight feet? Nine? Ten? No telling.

Can you tell I’m a huge fan?

But then there’s surround sound, which is different.

Yeah, we all know that the ideal surround system will have identical speakers throughout the room so the sounds coming from them are timbre-matched and sound blah, blah, blah. But we live in the real world, right? This is a world in which most of us don’t have the luxury of recreating Stonehenge with tower speakers in our family rooms. And here in the real world we know that most of what those surround channels are playing will be ambient sounds with the occasional voice and helicopter thrown in for good measure. A good surround system can immerse you in a movie and convince your subconscious lizard brain that bullets are whizzing by your head or you’re deep in a forest.

I know you’ve asked yourself a thousand times, “What about things happening above me?” You ask yourself these things because (a) you’re ahead of the curve, (b) you work for Dolby Labs, or (c) you have more money than you know how to sensibly spend. I get it.

Dolby Atmos posits that while traditional 5.1 and even 7.1 systems can place sounds around you, on the horizontal plane, there are sounds happening in the vertical plane that will add realism to your movie-watching or game-playing experience. While traditional surround sound can let you experience a helicopter flying by you, Dolby Atmos can have it flying over your head. 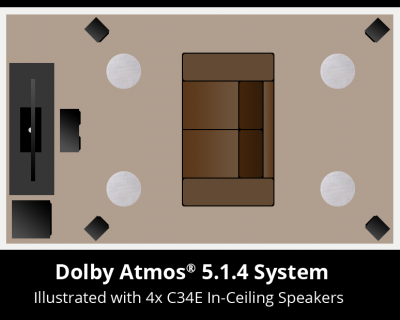 ​
You can achieve this minor miracle with a new receiver and some more speakers. On the speaker front you’ve got two options (I’m really into lists these days): 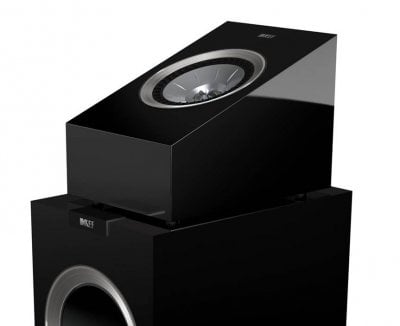 I’ve not heard any of the "ventriloquist speakers" that purport to throw their voices convincingly, but I did just install a pair of in-ceiling speakers that I think might interest you.

I’d like to pause here to be clear that I don’t yet have Dolby Atmos. I’ve heard several Atmos systems, both in stores and at CES, but I don’t yet have one. I’m married to a lovely and unreasonably understanding woman, but she tends to focus on silly things like food and mortgage payments.

Who the &%$# is RSL?
RSL, short for Rogersound Labs, has been making speakers since the ‘70s. I’ll spare you the typically thrilling corporate backstory, but I think it’s important to note that they’ve been around awhile, so they’re not new to this speaker-building thing.

The C34E in-ceiling speakers are different in a few ways (oh God, here comes another list):
1. The driver complement consists of a 7/8” soft dome tweeter and two 4 1/2” mid-woofs.
2. The speakers have a total mounting depth of just 4 3/4”, making them flexible for even cathedral ceilings.
3. They have a more complex crossover than most, not just using higher-quality components—air core vs. ferrite core inductors and polypropylene vs. electrolytic caps—but also rolling off the woofers at 12dB roll-off and 6B on the tweeter.
4. The low-profile speakers, when installed, are “edgeless,” thanks to a magnet-mounted grille that does away with the traditional channel-and-frame design. 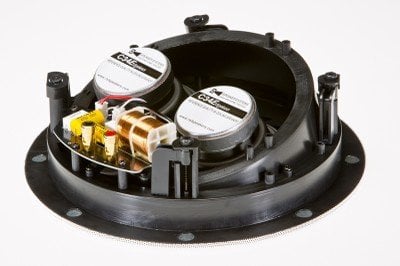 ​
Now, let me go back to that first point again. Yes, the largest driver in these speakers is 4-and-a-half inches. If you’re wondering how in the world you’re going to get any bass out of these, just know that you’re not. At all. RSL doesn’t list any frequency response specs that I could find, but I read that the C34Es can play down to 60Hz, and I think that’s highly optimistic.

But these are not designed for full-range use. They’re designed to give you a sense of space, of height, of being surrounded by sound from all directions, and on that front these excel. 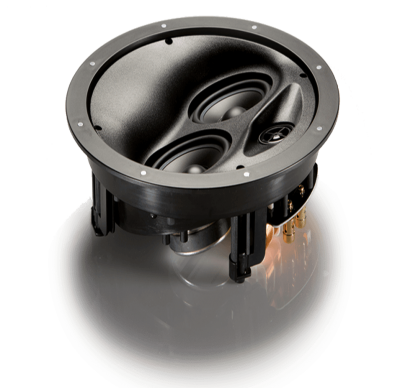 How do they sound? This is normally where I talk about the music I played, how the speakers sounded on my tried-and-true demo tracks, and detail how the speakers handled highs, midrange, and bass. I did play music through them[1], but detailing that here would be a little like having an automotive reviewer tell you how a Ford F350 handled the slalom course he put the truck through on a lark. It’s a bit pointless given the purpose of the thing being reviewed.

That said, the RSL C34Es do a fantastic job of filling a space with sound. It’s not a cloud, like a bipolar speaker creates, but more like a veiling mist that lets you pinpoint objects while still inhabiting a large area. I can think of no higher compliment for in-ceiling speakers that are designed to create the illusion of volume.

Installation
A few features of these speakers are designed to make installation easy, and they certainly helped me. I had plenty of space above my ceiling, so the low-profile design wasn’t a factor, but anyone who has ever had to juggle a speaker in one hand and figure out how to get speaker wires into the binding posts of said speaker—all while standing on a ladder—will appreciate the push-post connectors on these. It still helps to have three hands, but I didn’t find it a necessity. Which is good, because I just have the two.

Also helpful was the magnetic grille. Not only does the edgeless design help the (rather large) speakers disappear, but being able to put the grilles on without having to push hard is nice, and being able to pull them off really, really easily was super nifty. It’s just smart. Tell me again why all in-ceiling speakers don’t have that?

After measuring for where the wires should be, four times, saying a little prayer to the ghost of Sidney Harmon, and then cutting the holes, I found the wires, shoved half a bag of fiber fill into each. I’m positive I don’t have to tell you why I did that, but you may not have thought about the fact that it allows you to keep most of the blown-in insulation in the attic while keeping it from interfering with the speaker. 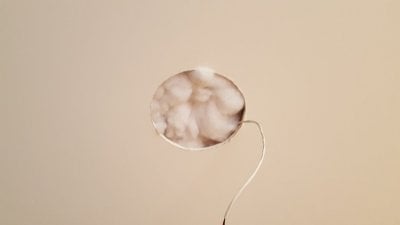 I clipped up the speakers, used a drill to mount them, and then connected them to the receiver and got to work. It really was a pretty no-fuss, no-muss kind of affair. 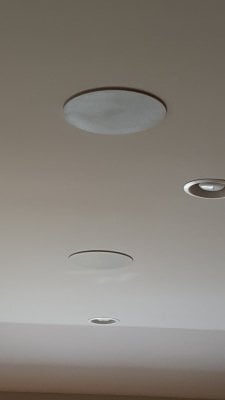 ​
I feel like I owe you more than I have to offer. I should tell you that Dolby Atmos is all that, a bag of chips, a bottle of craft beer, and a box of Skittles in just your favorite flavor. But, as I said, my system is 7.1. It’s a good system, but it’s not Atmos. What I can tell you is that I have heard some great Atmos systems, and these speakers would fit right in all but invisibly. They will represent everything from bugs to biplanes to bullets to birds with accuracy and special correctness and, most important, draw you into your favorite movies even further.


[1] Okay, if you must know, I found the highs to be on the soft side, which is my personal preference, and the mids to be as open as possible for a speaker shoved into an attic space and mounted to a gypsum baffle.

Cool stuff Doug, thanks for the review. I'm still struggling to figure out how I'm gonna get 4 more speakers hung for Atmos then 2 more for 7.1. That's a lot of walls to fish. This angle might work for me down the road.

I'm glad it was helpful, Sam. I was happy for the opportunity to install and evaluate these, and I'm always happy to be writing about anything audio.

I’m wondering how Doug kept the fiber fill (is that the same as packing peanuts from falling through the speaker hole?
You must log in or register to reply here.

Which speakers better for adding atmos - atmos directional speakers or in ceiling overheads?