If ever there was a story that didn’t need another screen representation, it’s Ira Levin’s Rosemary’s Baby. Given a perfect movie adaptation by Roman Polanski in 1968 and featuring a cast of highly respected professionals, his Rosemary’s Baby is a masterpiece of suspense. Still, if someone is going to update the story to modern day Paris with a cast of familiar actors and go for more violent shocks than for heart-stopping suspense, the new miniseries version of Rosemary”s Baby isn’t a bad attempt. It’s just rather unnecessary in that it hits all of the beats of the original tale but without their visceral impact and its off-the-wall mix of oddball humor and bone-chilling tension. 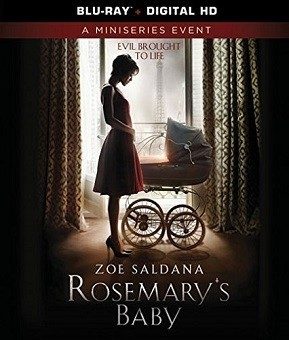 After the young married couple suffers a heart-breaking miscarriage, English literature professor and would-be novelist Guy Woodhouse (Patrick J. Adams) and his young wife Rosemary (Zoe Saldana) move to Paris so he can accept a teaching position at the Sorbonne. A series of events bring them into the orbit of the fabulously wealthy Margaux (Carole Bouquet) and Roman (Jason Isaacs) Castevet who offer the couple a vacant apartment in their building after Guy and Rosemary’s flat sustains extensive fire damage. Roman and Margaux take an active interest in Guy and Rosemary’s lives, and when Roman assists Guy in finding a publisher for his new novel (and later arranges a movie sale), Guy’s joy makes him insist that he and Rosemary make another try for a baby. Despite a weird night of lovemaking, Rosemary does find herself pregnant, but Guy’s coldness, an unusual amount of continuing discomfort with the baby, and the odd, sudden deaths of some friends who have taken too keen an interest in Rosemary and her unborn child convince Rosemary that something is going on that’s undoubtedly weird and wrong.Scott Abbott and James Wong have made sure that their script makes the supporting players in Guy and Rosemary’s life much more vibrant and youthful than in the original book and film. Gone are the elderly Castevets and Rosemary’s older friend Hutch and instead we have a Castevet couple in their 40s (young enough for each of them to come on to Guy and Rosemary on occasion; yes there are certainly traces of lesbianism at work here) and Rosemary’s friend is now a woman Julie (Christina Cole) who also at one time slept with Guy. The frequent deaths of the people in the Woodhouse’s orbit are no longer happening off screen or after the fact but are now in horrific close ups with heapings of gore (we also get graphic scenes of the cannibalistic Trent Sisters who garnered only a passing mention before). The screenplay does spend more time with Guy this time out: second guessing his choices and possibly having some regrets about what he’s done (not in the book), but all of the major events with Rosemary’s unusual conception (just as weird as in the movie but not with Jackie Kennedy this time), abnormal early labor pains, their sudden cessation, and her discovery of a book that sets her on the path to discovery are all there. Director Agnieszka Holland doesn’t milk Rosemary’s mounting panic and desperation the way Polanski did, and the show’s final twenty minutes just aren’t as moodily brilliant or as heart-stopping as in the movie. In the end, the changes which have been made are more cosmetic and for an appeal to a younger generation of viewers but don’t necessarily serve the story as well as the original concepts.Neither Zoe Saldana nor Patrick J. Adams seem exactly right for their roles. She seems too independent to be the helpless little lamb at the mercy of this coven, and he’s rather lightweight to be the source of such darkness which sets the plot into motion. Far better are Carole Bouquet and especially Jason Isaacs as the Castevets. She’s alluring and sophisticated in a way that believably drags in these youngsters into their hellish plot while Isaacs exudes darkness and menace with his every word and glance, by far the best performance on the show. Christina Cole makes a genuinely caring friend for Rosemary and Guy while Olivier Rabourdin as a police commissioner who learns too late whom he’s dealing with is also quietly effective. Stefano Cassetti exudes satanic peril as a blue-eyed neighbor who everyone insists is no longer alive.

The program has been framed in the widescreen television aspect ratio of 1.78:1 and is presented in 1080p using the AVC codec. Sharp and detailed as can be and completely free of artifacts, the transfer’s only slight misstep is in its black levels which are only average. Otherwise color is excellent with believable skin tones for all, and there is excellently consistent contrast throughout. Each part of the two-part miniseries has been divided into 16 chapters.

The DTS-HD Master Audio 5.1 sound mix makes excellent if sporadic use of its extended soundfield with the background music score the most consistent occupant of both the fronts and rears. There are occasional split effects which make a fine impact when they’re utilized, but a suspense series like this could use far more of them for maximum effect. Dialogue has been excellently recorded and has been placed in the center channel.

If you want your Rosemary’s Baby more graphically violent but less intensely suspenseful, the new miniseries event of the story should be right up your alley. The price is certainly right, and this release does boast excellent video and audio quality. But, frankly, the story is better served in its original 1968 film release (which is also available now on Blu-ray in a Criterion edition of sterling quality).

I think the movide industry should seat a panel of judges from different walks of life to determine whether or not a "remake" is justified. Criteria could include whether the original(s) were representative of their source material and deemed classics in their genre or whether a remake might be considered a worthy endeavor to get it right; whether the filmmakers actually have something new to say or a better way of presenting the material than the original(s); and, most especially, whether enough time has passed since the last version to warrant a new one for a different audience.
You must log in or register to reply here.