MGM’s remake of Carrie pretty much stayed true to the narrative vibe of the original 1976 movie and possessed that feeling of “why remake a classic?” about it, but the new version of Robocop directed by Jose Padilha has an altogether different vibe putting the original robot/policeman concept within a new perspective of a future world filled with robotics while amping up the emotional quotient of the concept far beyond what was contained in the original 1987 movie. 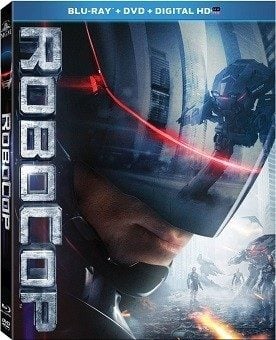 In 2028, the OmniCorp organization has the technology to conduct warfare and peacekeeping on foreign soil with robot drones and cyborgs, but the American public is wildly against their own city streets being monitored and policed by these types of machines. To combat their hesitancy, Raymond Sellars (Michael Keaton), the CEO of OmniCorp, commissions his top scientist Dr. Dennett Norton (Gary Oldman) to find a way to humanize the robot technology they now have available. His chance comes when police detective Alex Murphy (Joel Kinnaman) is critically injured in an explosion set up by several crooked fellow officers who were afraid he was about to expose them. He emerges as Robocop, mostly machine but with his head, heart, lungs, and right hand still functioning through the robotics which surround him. To maximize his effectiveness, Alex’s empathy, compassion, and concern are dialed down to the bare minimums, so much that his wife (Abbie Cornish) and son (John Paul Ruttan) don’t generate much of an emotional response from him as he begins a full scale assault on Detroit’s extensive criminal element. But a strange thing begins happening: the human brain’s ability to repair and regenerate emotions begins to override Alex’s programming as he slowly begins to solve not only other crimes but his own murder case and, inevitably, when OmniCorp begins to fear his growing power to see through their crooked machinations, they must try everything in their power to bring their own creation down.

Joshua Zetumer’s script gets a lot of mileage from its satirical look at power politics in government and getting legislation passed through a manipulative media (continual cutaways to Samuel L. Jackson’s ranting TV pundit Pat Novak), effectual and ineffectual modern crime solving techniques and corruption which may be housed within, and, of course, the danger of too much power being placed in any one person’s hands. The film becomes much more emotional at its core not only from Dr. Norton’s loving attention to his Robocop creation but from Alex’s wife and son who figure prominently at key moments in the storytelling. For lovers of big action scenes, of course, there are several involving both man and futuristic machines. Padilha stages two different warehouse shootouts: one a simulation to prove the Robocop’s adeptness against overwhelming mechanical odds and then a real world shootout against even more manned men with armor piercing weapons which could actually decommission the hero if he’s hit in the right spots. There are one or two surprises along the way as we find out the identities of some of the enemies, but the climactic faceoff between hero and villain with his wife and child as potential hostages and/or collateral damage seems a bit too by-the-numbers in light of the freshness of much of the earlier scripting.

Lanky Joel Kinnaman fits beautifully into the Robocop mold and is allowed more emotional expressiveness than Peter Weller was in the original. Gary Oldman offers another compassionate portrait of a genius struggling with his own creation while Michael Keaton and especially Jackie Earle Haley as OmniCorp CEO and chief programmer make dandy white collar villains. Abbie Cornish has a couple of emotionally true scenes as the concerned wife determined to find the humanity within her mechanized husband. In smaller roles, Jennifer Ehle as a PR drone, Michael K. Williams as Alex’s former partner, and Marianne Jean-Baptiste as Alex’s police chief make their presences known. Samuel L. Jackson is as typically bombastic as one would expect from his showy news commentator character.

The film’s 2.40:1 theatrical aspect ratio is faithfully rendered in this 1080p transfer using the AVC codec. The transfer’s main irritation is in its use of inconsistent contrast which naturally leads to unpredictable black levels (which always seem a shade or two above where they should be). Otherwise, sharpness is aces with nice detail seen in faces and in the interestingly designed Robocop armor and built-in weaponry, and color is nicely controlled with accurate skin tones. The film has been divided into 32 chapters.

The DTS-HD Master Audio 5.1 sound design offers a wonderfully active sound palette with exceptional use of all available channels for panning and split sound effects and for Pedro Bromfman’s driving music score. Though there is a bit of directionalized dialogue, most of the well recorded dialogue has been placed in the center channel. The LFE channel also gets a nice workout in this reference quality sound mix.

Deleted Scenes (3:57, HD): five scenes which may be watched separately or in montage.

OmniCorp Product Announcements (3:27, HD): ten brief advertisement mock-ups for the OmniCorp robotic product line. They may be watched separately or in montage.

Robocop: Engineered for the 21st Century (28:47, HD): a three-part behind the scenes look at the philosophy of the remake and the production of the film featuring sound bites from producers Marc Abraham and Eric Newman, director Jose Padilha, stars Joel Kinnaman and Michael Keaton, production designer Martin Whist, art director Brandt Gordon, and special effects coordinator James E. Price who individually discuss the new vision for this film’s story, the weaponry and motorcycle utilized in the film, and the design and function of the new Robocop suit.

DVD/Ultraviolet: disc and code sheet enclosed in the case.

Fans of the original Robocop have nothing to fear from this new version which takes the concept from the original picture and gives it a moderately different spin and plays on decidedly different emotions from the original. Picture and sound on the Blu-ray do the movie proud, and the making-of bonus feature offers some actual information on the film’s craft as opposed to puffy words of praise for all the movie’s participants. Recommended!

Missed this in the theater, and the IMDB score wasn't encouraging, but your write-up has me intrigued! I'm not sure if this will be a release-date $20 purchase for me, but if I see this in the $10 and under bin in a few months, I will be tempted to pick it up.

It will be 13 bucks next week at target.

I actually like this version much much more than the original.
You must log in or register to reply here.