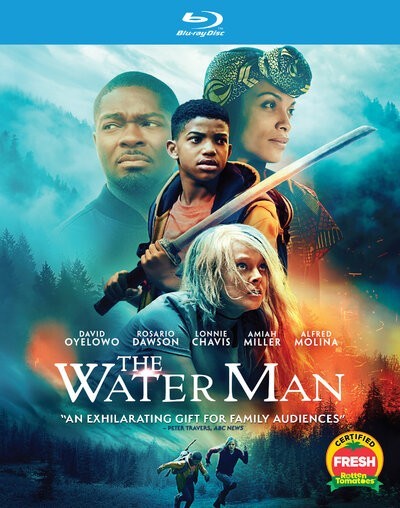 THE WATER MAN stars the ensemble cast of David Oyelowo (Selma), Rosario Dawson (Seven Pounds), Lonnie Chavis (“This Is Us”), Amiah Miller (War for the Planet of the Apes), Alfred Molina (Spider-Man 2), and Maria Bello (“NCIS”). The film is the directorial debut of David Oyelowo and is based on the Black List script written by first time feature screenwriter Emma Needell. ShivHans Pictures, Harpo Films and Youba Saxon produced the film with Oyelowo, Carla Giardini, Shivani Rawat and Monica Levinson serving as producers along with executive producers Oprah Winfrey, Darren M Demetre, Connor Flanagan and Needell.

In THE WATER MAN, Gunner (Lonnie Chavis) sets out on a quest to save his ill mother (Rosario Dawson) by searching for a mythic figure who possesses the secret to immortality, the Water Man. After enlisting the help of a mysterious local girl, Jo (Amiah Miller), they journey together into the remote Wild Horse forest -- but the deeper they venture, the stranger and more dangerous the forest becomes. Their only hope for rescue is Gunner’s father (David Oyelowo), who will stop at nothing to find them.

THE WATER MAN DVD and Blu-ray bonus features include:

· The Making of The Water Man