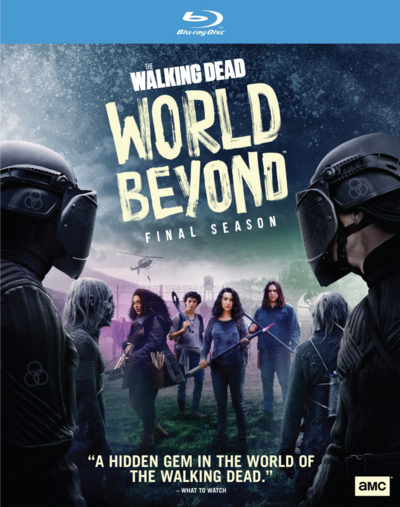 THE WALKING DEAD: WORLD BEYOND

LOS ANGELES, (February 22, 2022) - RLJE Films, a business unit of AMC Networks, will release Season 2, the final season, of the horror/drama series: The Walking Dead: World Beyond on DVD and Blu-ray on March 8, 2022. The second season of the series originally aired on AMC Networks in October 2021.

Season two of The Walking Dead: World Beyond concludes the epic story of Iris (Aliyah Royale), Hope (Alexa Mansour), Elton (Nicolas Cantu), and Silas (Hal Cumpston) -- four friends who journeyed across the country on a mission that transformed everything they knew about themselves and the world. As they face off against the mysterious Civic Republic Military and fight for control of their own destiny, goals will shift, bonds will form and crumble, and innocence will be both lost and found.

I have followed all the "Walking Dead" series, and collected the seasons of the two main shows as they arrived on Blu ray. I have not purchased either season of World Beyond. First the Blu rays weren't available in Canada. Now they are, but although I am a completest and feel I must have it in my collection, I found the series a bore full of teenage angst with characters I did not care about and a real chore to plow through. I'll probably force myself through the discs once and only dust it ever after. My question is this. Are there any plans to release the entire run in one package at "bargain prices"?
You must log in or register to reply here.