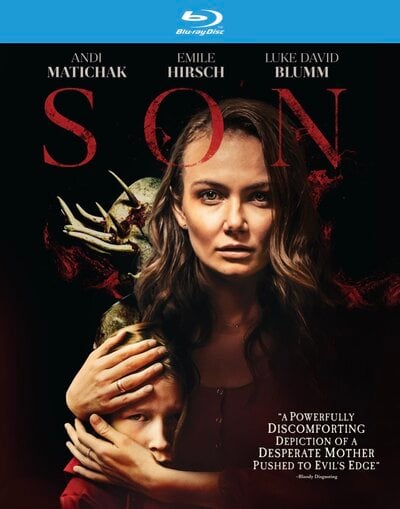 “a powerfully discomforting depiction of just how far a mother would go for her son… Kavanagh once again delivers potent chills and an ominous atmosphere” – Bloody Disgusting​
LOS ANGELES, (April 15, 2021) – RLJE Films, a business unit of AMC Networks, and Shudder, AMC Networks’ premium service for horror, thriller and the supernatural, will release SON on DVD and Blu-ray on May 18, 2021.

Written and directed by Ivan Kavanagh (Never Grow Old, The Canal), SON stars Andi Matichak (Halloween franchise, Assimilate), Emile Hirsch (Once Upon a Time...in Hollywood, Into the Wild, Milk), and Luke David Blumm(The King of Staten Island). RLJE Films will release SON on DVD for an SRP of $27.97 and Blu-ray for an SRP of $28.96.

In SON, after a mysterious group of individuals breaks into Laura’s home and attempts to abduct her eight-year-old son, David, the two of them flee town in search of safety. But soon after the failed kidnapping, David becomes extremely ill, suffering from increasingly sporadic psychosis and convulsions. Following her maternal instincts to save him, Laura commits unspeakable acts to keep him alive, but soon she must decide how far she is willing to go to save her son.

Check out the trailer:

SON DVD and Blu-ray bonus features include:
· Interviews with the Cast and Crew of SON
· Deleted Scenes

ABOUT SHUDDER
AMC Networks’ Shudder is a premium streaming video service, super-serving members with the best selection in genre entertainment, covering horror, thrillers and the supernatural. Shudder’s expanding library of film, TV series, and originals is available on most streaming devices in the US, Canada, the UK, Ireland, Germany, Australia and New Zealand. To experience Shudder commitment-free for 7 days, visit www.shudder.com.