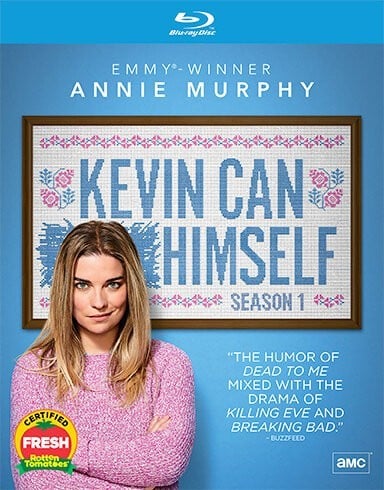 KEVIN CAN F**K HIMSELF

LOS ANGELES, (October XX, 2021) - RLJE Films, a business unit of AMC Networks, will release Season 1 of the dark comedy series Kevin Can F**K Himself on DVD and Blu-ray on November 16, 2021. The series originally aired on AMC Networks earlier this year in June 2021. It has been renewed for season 2 and will release on AMC+ and AMC in 2022.

Created by Valerie Armstrong ("Lodge 49"), Kevin Can F**K Himself is directed by Anna Dokoza(“Up All Night,” "Flight of the Conchords") and Oz Rodriguez (Vampires vs. the Bronx, "A.P. Bio"). The series stars Emmy winner Annie Murphy (“Schitt’s Creek”), Mary Hollis Inbodin ("The Righteous Gemstones"), Eric Peterson (“Kirstie”), Alex Bonifer (“Superstore”), Brian Howe (“Vice Principals”), and Raymond Lee (“Here and Now”). RLJE Films will release Kevin Can F**K Himself on DVD and Blu-ray for an SRP of $39.98.

Allison McRoberts is the prototypical Sitcom Wife married to Kevin, her self-centered husband. When she learns that the perfect future she envisioned is impossible, she teams up with her neighbor Patty as she attempts to escape her confines and take control of her life. A completely original new dark comedy,Kevin Can F**K Himself shows what happens when you leave the brightly lit sitcom set and see the reality behind the laugh track.

Bonus Features on the DVD and Blu-ray include:
● A Look at the Series
● Meet the Characters
● Making of the Show

This was a really good and very original show.
You must log in or register to reply here.