A most unusual prison drama that foregoes sentiment and sensationalism and instead focuses on the sociological realities of real-life prison conditions tied into a gripping docudrama with both suspense and thrills, Don Siegel’s Riot in Cell Block 11 may have been made on a very low budget, but there’s nothing cut-rate about the acting, production values, or direction in this memorable look at the prison system circa 1953. 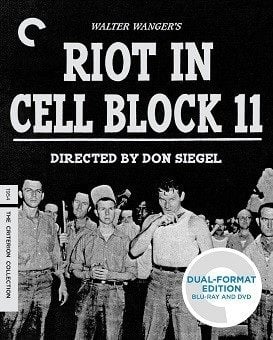 Fed up with inhumane treatment, overcrowded conditions, and an indifferent society who couldn’t care less what happens to prisoners once they’re inside, a group of highly motivated convicts in the isolation section (Cell Block 11) at Folsom stage a takeover and manage to subdue the four guards who are on watch there. Led by the driven, defiant Dunn (Neville Brand), the prisoners demand the warden (Emile Meyer) meet their demands (including better conditions, a work program, decent food, and isolation facilities for the psychos among them) before they’ll agree to release the captured guards. Though other cell blocks are also successful in staging riots in their own blocks (and five more guards fall to the prisoners), Dunn and his men find themselves facing other inmates who don’t think the riot is the way to effect changes and must also deal with the state police who are called in to assist the prison guards, a prisoner commissioner (Frank Faylen) who’s unsympathetic to their demands, and a governor (Thomas Brown Henry) who’s also slow to take action.Made for under $300,000, Riot in Cell Block 11 makes the most of its real-life Folsom Penitentiary cell block which gives such a feeling of verisimilitude to the proceedings that one would swear every one of the men before the camera (not just the extras) is a convict. Richard Collins’ script (based on a 1952 prison riot in Michigan) is a beautiful amalgamation of drama and documentary facts and figures, all smoothly woven into the fabric of the movie so that the viewer learns things about prison life while being gripped by the very tense confrontations between prison officials and inmates. Director Don Siegel gets right into the very corridors and yards of the prison using tracking shots expertly and close-ups to emphasize the zealous commitment these men have to bettering their fates. And the action rises and falls with regularity as more men riot and more troops are called in a constant ebb and flow of actions and reactions in the standoff between the two sides. But the film doesn’t really revel in melodramatic thrills: while Siegel stages the initial revolt with great cacophony and the later riots in Blocks 4 and 5 as things get out of control, we also see an honest cross section of inmates: some decent men missing their families or praying for guidance, some snarling beasts out for blood, many confused about what action is the right action to take. The standoff with the state police is rather sloppily staged (with the police not wearing masks, why don’t the huge amounts of tear gas they’re firing at the rioters affect them?), but for such a low budget movie, one continues to be impressed with the size and scope of the entire enterprise.Neville Brand and Leo Gordon (a real-life ex-convict who had gotten his life back on track via show business) have charisma to spare as the two inmates leading the revolt. Brand in particular has real star power as the story works its way to a very surprising (and decidedly not predictable) conclusion. Emile Meyer is solid and dependable as the warden doing his best to keep things under control, and Frank Faylen does his usual expert job as the commissioner unmoved by the prisoners’ complaints and pleas for humane treatment. Robert Osterloh underplays the inmate seemingly most respected for his patience and integrity (days before his parole hearing, he doesn’t want to rock the boat of any chance at freedom) while other prisoners and guards are well played by such familiar faces as Alvy Moore, Dabbs Greer, Whit Bissell (as the sadistic guard all of the inmates are keen to see dead – we never see his malicious side), and Paul Frees (the young guard whose capture starts the entire business).

HTF’s resident aspect ratio expert Bob Furmanek discovered that this film was likely shot for 1.66:1 presentation but with ratios from 1.37:1 to 1.85:1 safely covered. Criterion has opted to use the 1.37:1 aspect ratio for the disc presentation, but this leaves many shots with a bit too much headroom for comfort. (My Samsung Blu-ray player allows user adjustment to a simulated 1.66:1 aspect ratio which I viewed when listening to the commentary and is definitely my aspect ratio of choice.) In any event, sharpness is excellent throughout apart from some stock footage used to open the film (and which contains a scratch and some increased grain). The grayscale for the actual movie is stunning with lush black levels and white levels clean and clear. The film has been divided into 14 chapters.

The PCM 1.0 (1.1 Mbps) sound mix is typical of its era but probably boasts stronger fidelity than one might expect for a low budget film from this period. Dialogue is always clear and the driving Herschel Burke Gilbert music and the appropriate sound effects never overpower the speech when it occurs. There are no age-related artifacts like hiss or crackle to mar the listening experience.

Audio Commentary: film historian Matthew H. Bernstein offers a very interesting and entertaining commentary with background information on the principal members of the cast and crew and production stories and film analysis all expertly combined into a monologue most fans of the film will likely enjoy.Don Siegel Autobiographical Excerpts (25:07): the director’s son Kristoffer Tabori reads the chapter from Siegel’s autobiography dealing with the making of Riot in Cell Block 11.Don Siegel, Director (13:01): again, Kristoffer Tabori reads an excerpt from a book, this time from Stuart Kaminsky’s 1974 book on his father’s directorial career.The Challenge of Our Prisons (59:07): excerpts from a 1953 NBC documentary radio series on prisons and prison reform.Twenty-Nine Page Booklet: contains the cast and crew lists, a selection of stills from the movie, film historian Chris Fujiwara’s look at the film and how it fits into the oeuvre of Don Siegel’s career, producer Walter Wanger’s views on prison life and reform as published in Look magazine, and memories of Don Siegel by director Sam Peckinpah who served as Don Siegel’s assistant on the movie.Timeline: can be pulled up from the menu or by pushing the red button on the remote. It shows you your progress on the disc, the title of the chapter you’re now in, and index markers for the commentary that goes along with the film, all of which can be switched on the fly. Additionally, two other buttons on the remote can place or remove bookmarks if you decide to stop viewing before reaching the end of the film or want to mark specific places for later reference.DVD: disc enclosed in the case in this dual-format release.

One of the greatest and most honest of the prison riot films, Riot on Cell Block 11 is a real treat from a director whose films almost always provide action and thrills but with some thought-provoking subtext giving the movie an added richness. Highly recommended!

Thank you for mentioning the aspect ratio issue. RIOT began filming three months after Allied Artists had switched to widescreen production. 1.66:1 is Don Siegel's intended ratio and I'm very disappointed that his first widescreen film did not get the proper treatment on Blu-ray.

Cinephiles should not have to use a zoom function in order to see a film as the director intended!

Thank you for mentioning the aspect ratio issue. RIOT began filming three months after Allied Artists had switched to widescreen production. 1.66:1 is Don Siegel's intended ratio and I'm very disappointed that his first widescreen film did not get the proper treatment on Blu-ray.

Cinephiles should not have to use a zoom function in order to see a film as the director intended!
Click to expand...

I couldn't agree with you more. I think this was an opportunity missed by the usually excellent Criterion.
C

Matt Hough said:
I couldn't agree with you more. I think this was an opportunity missed by the usually excellent Criteriow

When will CELL 2245 be released on bluray? It was written by the same author as RIOT IN CELL BLOCK II. Also from the same era ,the long forgotten and rarely seen documentary THE CAROL CHESSMAN STORY.It was shown in cinemas as part of a double feature.Remember them? At the time Chessman was the longest serving prisoner on death row.
Click to expand...