After being blacklisted in America, director Jules Dassin took his talents to France (and later onto an international stage) making a masterpiece of film noir excitement and suspense – Rififi. The blueprint for every subsequent caper and heist film made in all the decades since, Rififi has the look and feel of a genuine classic, a movie so brilliant that the director even stole from himself in fashioning another suspense caper a decade later – Topkapi. 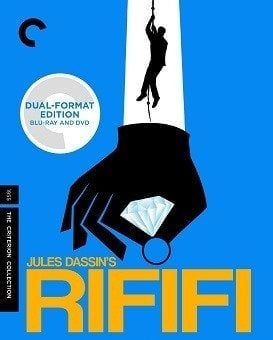 Four thieves (Jean Servais, Carl Möhner, Robert Manuel, Jules Dassin) decide to “go for the gold” and rob the vault in the swank Parisian jewelry store Mappin & Webb using an elaborate scheme of breaking into the store from above. The heist goes as planned but as fate would have it, one of the thieves takes an extra gem whose recipient causes a rival gang to want the spoils of the protagonists for themselves. They kidnap the child of one of the robbers to insure they get what they want, and with the child’s life at stake, the band’s head man Tony takes it on himself to find the boy and return him to his family thus leading to another caper following on the heels of the first one.Though the screenplay by director Jules Dassin was based on a book, only a small piece of the novel was used in the film with Dassin fleshing out the story with additional characters, backstories for them which didn’t exist in the original book, and the climactic caper to find and rescue the abducted child. Famous for the heist sequence which lasts almost a half hour with not one word of spoken dialog and no music, the film’s clever construction and Dassin’s superb direction (he won Best Director at Cannes for this film) which offers a mix of close-ups, medium shots, and long shots where needed is a miracle of exposition, procedure, and follow-through as we watch the team do their prep work with alarms and tools and make dry runs to time everything out to the last second (but with the director holding back some surprises for the actual heist). And the film’s last twenty minutes involving the kidnapping, ransom, and rescue is tremendously gripping leading to one of the most brilliantly directed and edited climaxes in all of cinema. “Rififi” means “rough and tumble” (a nightclub singer played by Magali Noël croons a song about this very thing), and Dassin has made certain that the characters we see in the film fit that description to a tee.The director (billed as Perlo Vita) plays an Italian safecracker with a fatal eye for the ladies and is most effective playing in a low key fashion, but Jean Servais’ world-weary thief Tony with a king’s ransom in his grasp and what sounds like a fatal case of emphysema is the film’s true tragic figure despite his brutal tactics toward those who have been disloyal. The other two team members – handsome Carl Möhner as the gang’s muscle and Robert Manual as the jolliest of the crew – do very well by their roles. Three women, all mostly secondary to the plot, do have key spotlight moments: Janine Darcey as the frantic mother of the kidnapped boy, Marie Sabouret as Tony’s former lover now being kept by his rival Pierre (Marcel Lupovici), and the aforementioned Magali Noël who sings the title song and struts and wiggles for an appreciative nightclub audience.

The film’s original 1.37:1 theatrical aspect ratio is faithfully delivered in this 1080p transfer using the AVC codec. It’s a beautiful transfer for the most part with all of the previous scratches and artifacts from previous DVD releases now eliminated making for a pristine image. Dassin shot outside locations only on overcast days thus giving the contrast a sometimes milky texture and lessening the impact of the black levels. Grayscale otherwise, however, is excellent, and sharpness, while generally superb, is occasionally a bit soft likely part of the original photography. Unlike other French transfers offered by Criterion, this one does not appear to have been digitally manipulated to ill effect. Subtitles are in white and are very easy to read. The film has been divided into 24 chapters.

The PCM 1.0 (1.1 Mbps) sound mix, unlike previous DVD releases of the film which had a harshness and a bit of distortion, is surprisingly even and very effective. While there isn’t much low end to the mix, the combination of direct recording and post synched dialogue is smooth and doesn’t draw attention to itself. Georges Auric's music is spare but efficient, and the sound effects (apart from gunfire which sometimes sounds like cannons) mix in well with the track’s other elements. There is also a Dolby Digital 1.0 English track which has a harsher sound with some hiss and is louder in volume than the French track.

Jules Dassin Interview (28:42, HD): Recorded in 2000, Dassin speaks of the blacklist era which robbed him for a time of his livelihood and some friendships and then goes on to search his memory for stories about the writing, production, and reception of Rififi.Stills Gallery: studio portraits of all the main actors in costume, some design sketches, and several behind-the-scenes shots during production.Theatrical Trailer (2:45, HD): English-language trailerTwelve-Page Booklet: features a cast and crew list and critic J. Hoberman’s adulatory essay on the film.DVD: included in these dual-format releasesTimeline: can be pulled up from the menu or by pushing the red button on the remote. It shows you your progress on the disc and the title of the chapter you’re now in. Additionally, two other buttons on the remote can place or remove bookmarks if you decide to stop viewing before reaching the end of the film or want to mark specific places for later reference.

Jules Dassin’s Rififi is the grandfather of all caper films and another of his expert films noir, his first after being blacklisted in America and immigrating to Europe. This Criterion Blu-ray presents the film in by far its best home video incarnation in this country and comes highly recommended!

Excellent film and a easy purchase for me. Loved Topkapi too and i hope that movie will come out on blu-ray too.

I like the cover. Never seen the film, I'll pick this one up on the next sale.

the old one was far better

Fine review. Not to be argumentative, but I always wonder why "Rififi" is called the grandfather of all caper films, when it strongly resembles the even superior "The Asphalt Jungle" (1950) which precedes it.

This is a great film. I have the import, but I'm going to splurge for the Criterion.

Matt's review reminds me how long I have been involved with this hobby, and with HTF.Specifically, I was remembering the fuss when Criterion released Rififi on DVD for the first time. A key sequence in the film was marred by audio & video not being in sync.The fuss was warranted - Criterion corrected the error, although I have forgotten whether they corrected the error for that same release, or for an upgraded DVD release a few years later.Now, we have the Blu!

mackjay said:
Fine review. Not to be argumentative, but I always wonder why "Rififi" is called the grandfather of all caper films, when it strongly resembles the even superior "The Asphalt Jungle" (1950) which precedes it.
Click to expand...

The heist nature of Rififi was very well advertised as well as criticised when it was released. The US Production code forbade intricate detail in carrying out a realistic heist in fear that it would inspire copycat crimes. It was banned in several countries and was supposedly banned in Mexico due to copycat burglaries mimicking the movie.

Also, I think Rififi, in its day, was the more well known and respected heist film inspiring several filmmakers in the 60s to make their own heist films.

Rififi was even mentioned in an episode of The Dick Van Dyke Show, and it was in the context of a movie that it was expected they would have all seen.

Moe Dickstein said:
Rififi was even mentioned in an episode of The Dick Van Dyke Show, and it was in the context of a movie that it was expected they would have all seen.
Click to expand...

For years I wondered if the correct pronunciation was RIFifi or RiFIfi. Love that episode, BTW.

Just watched this last night. Fantastic film (and fully justified my "blind buy" of the Criterion Blu-ray). Have been on a Criterion kick of late (Charade, Sweet Smell of Success and Rififi are three of the last four movies I've watched in my "man-cave" and I have a stack of recently arrived Criterion titles to go through--Colonel Blimp, Hidden Fortress, Throne of Blood, Belle de Jour, complete Tati, Badlands and many more).
You must log in or register to reply here.