Red Army is a fascinating documentary about the Soviet Union's hockey team, which during most of the 1980s was best in the world (much to the chagrin of Canada and the United States). However, this is not just another sports documentary - the fact that Werner Herzog is the executive director makes that clear. Red Army is about sports and politics, sports and nationalism, sports and culture, and the negative effects that a nation's obsession with sports excellence can have on the participants. 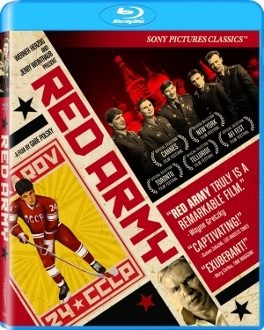 Red Army, as told largely through the recollections and perspective of the famous Soviet (and later Detroit Red Wings) hockey defenseman Slava Fetisov, makes a compelling case that the stars of the incredibly successful Soviet hockey team were also among the unhappiest skaters anywhere. Most Americans who are old enough likely remember the "Miracle on Ice" Olympics of 1980, when a United States team of mostly college hockey players upset the highly favored Soviets. But a similar upset occurred 20 years earlier, when the young American team beat Canada, the Soviet Union, Czechoslovakia and Sweden enroute to an improbable gold medal. However, that loss was only a hiccup in the Soviet Union's dominance in the Winter Olympics. The Red Army hockey team went on to win the gold medal in 1964, 1968, 1972, and 1976 before losing in 1980. The Soviets bounced back to win again in 1984 and 1988, when the streak ended after the dissolution of the Soviet Union (a hybrid of the Red Army team, called the Unified Team, won the gold medal in 1992).

Fetisov, prompted by the sometimes awkward questioning of director Gabe Polsky, relates how as a young child he began playing hockey, and he was good enough to be invited to try out for a prestigious youth team. His play was so impressive that he eventually was inducted into the Soviet military and was assigned to the Red Army team, which had reached prominence under its innovative and creative coach, Anatoli Tarasov. Tarasov's unorthodox approach included teaching his players how to dance, apparently in order to make them more fluid on the ice. However, Tarasov was fired after he pulled his team off the ice during a game because of a dispute, even though one of the spectators was Soviet leader Leonid Brezhnev. Tarasov's eventual successor was Viktor Tikhonov, a domineering, dictatorial coach who is the villain of Red Army. Tikhonov forces the Red Army players to practice and play 11 months of the year, and many of the players lived in barracks and were allowed to go home only one weekend per month. One player asked for time off to visit his dying father, but Tikhonov told him that he could not go because he had to prepare for the next game. The player never got to see his father again. Tikhonov treated his players as if they were circus animals (there actually is some fascinating footage of Russian bears on skates, wielding hockey sticks). “Coach with no heart, can he teach us to play?” Fetisov says. “No. He give us drills, discipline. He wants to see us still as puppets, dancing to his whistle for the rest of our lives. That’s dictatorship.” Fetisov played the game with plenty of heart. It is fascinating to watch the expression on his face as he watches a replay of the 1980 loss to the United States - it still hurts.

The members of the team put up with it because their families enjoyed privileges which were denied to most Soviet citizens - bigger and better living conditions, finer food, the ability to travel, etc. However, when relations between the Soviet Union and the West began to improve, the National Hockey League started to make overtures to the Red Army's best players, including Fetisov. The Soviets resisted, and at one point Fetisov was encouraged to defect, but he refused to do so. Fans of the FX series The Americans may wonder why the Russian spies in that program, who enjoy a comfortable upper-middle-class life, do not call it quits and remain in America. Fetisov points out that he could not bring himself to defect because his loved his country, warts and all. "I was so proud to play for Red Army," he says. And his country loved him. To the Soviets, the hockey team was a source of national pride, prestige, and propaganda - the team's success was, they believed, proof of the superiority of Communism. Fetisov eventually made it to the NHL, where he was instrumental in helping the Detroit Red Wings win two Stanley Cups.

Director Polsky gained access to a treasure trove of Soviet films and still photographs which have been incorporated into the documentary. He also was able to get interviews with several of Fetisov's teammates, albeit some of them come across as reluctant participants. A willing and informative interviewee is former Detroit head coach Scotty Bowman, who freely admits that he did not fully understand what the Russian players were doing even as he coached them.

One does not have to be a hockey fan to enjoy and appreciate Red Army, although the beauty of five players skating as one can be enjoyed by anyone. The question remains - is being a member of the best hockey team in the world worth the sacrifices which its players were forced to make? Or should separation of sport and state be the international norm?

Red Army is framed at 1.78:1 and is shown at 1080p, utilizing the AVC codec. The images are mostly sharp, although there is plenty of vintage footage which is variable in quality but always watchable. The excellent cinematography is by Svetlana Cvetko (Inside Job) and Peter Zeitlinger (Rescue Dawn, Grizzly Man).

The English 5.1 DTS-HD audio is the equal of the picture quality. Every word in clear and understandable, and easy-to-read subtitles pop up whenever anyone speaks in Russian. There is nothing here to blow anyone away, but it does what it does very well.

There is an audio description track in Dolby Digital 5.1, and there are subtitles in English, English SDH, and French.

Extras on both the Blu-ray and the DVD include an interesting commentary track by Werner Herzog and Gabe Polsky, and a Q&A session with Gabe Polsky at the Toronto Film Festival.

Blu-ray exclusives include eight deleted scenes, most of them quite enjoyable; a Q&A session with Gabe Polsky and former U.S. Ambassador to Russia Michael McFaul; and a 16-minute interview with Scotty Bowman. The Q&A session is audio only, with a still photograph of it on the screen while the audio plays. The interview with Bowman is mostly about hockey and will be of interest primarily to fans of the game.

Also included is the theatrical trailer for Red Army, as well as trailers for the documentaries The Salt of the Earth and Merchants of Doubt.

Red Army is a riveting documentary which received a 100% "fresh" rating from the top critics at rottentomatoes.com. Audiences loved it was well, giving it a "fresh" rating of 88%. Hockey fans are sure to enjoy it; those who are not enamored with the sport but who are interested in how sports and geopolitics intersect will find it to be just as compelling.