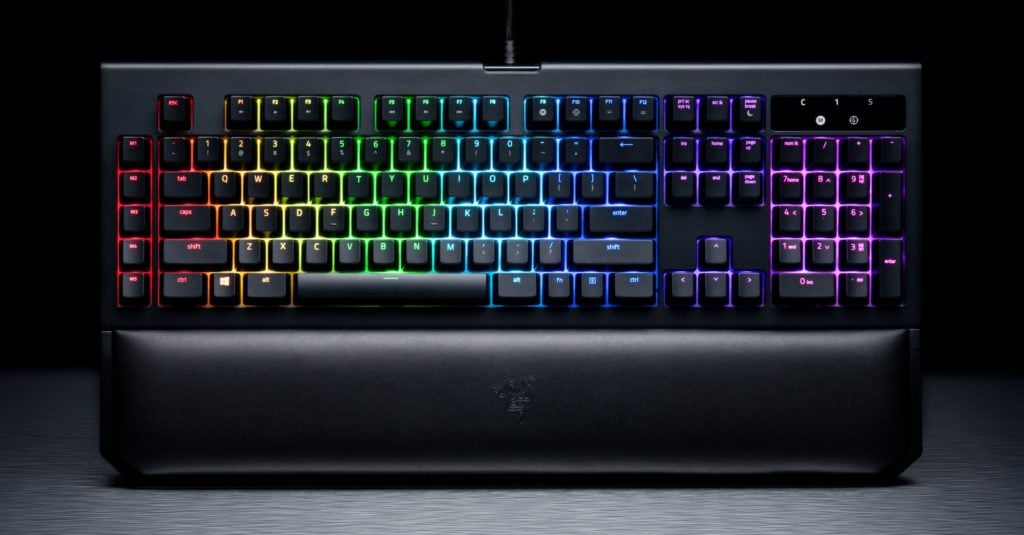 I was pleasantly surprised when Razer's PR folks informed me less than a month after my review had gone live that they had finally released my dream keyboard - the BlackWidow Chroma V2, which includes a magnetically attached wrist pad and offers a choice of key types utilizing Razer's proprietary switches. The Razer Green version I was sent is fully mechanical, tactile and clicky. They also offer Razer Orange, which is tactile but silent, and Razer Yellow which is linear and silent.

Some of you are probably asking why a Home Theater website is reviewing keyboards. Good point. Let's start with the obvious - home theaters are not just for TV, Movies and console gaming. They can also be used for hardcore PC gaming, which is what I do in my theater much of the time. Gaming on a PC can be done with an Xbox controller, but generally speaking anyone who takes PC gaming seriously used a keyboard and mouse. Razer's keyboards have always been my go-to product for gaming due to their durability, excellent back-lighting (important in a dark room), and the pleasant typing/gaming experience they offer. 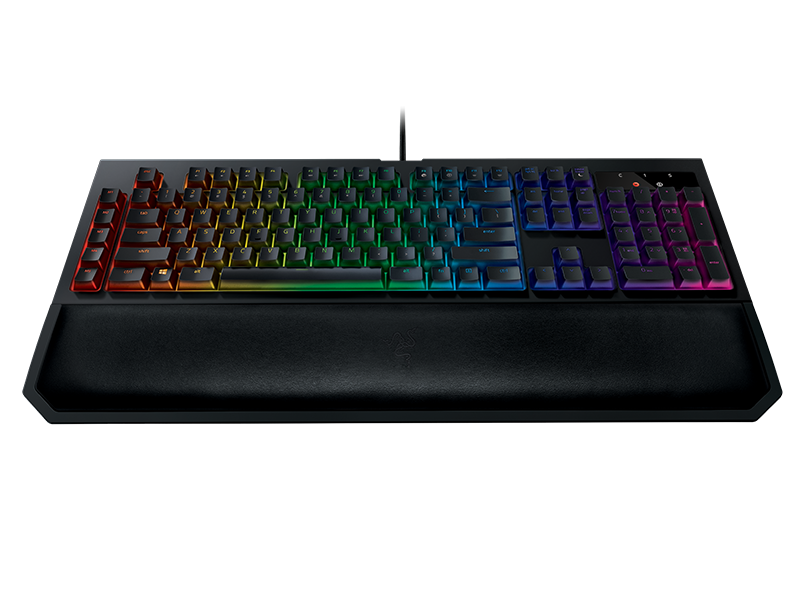 The second reason I review keyboards, is because I spend a huge amount of my life punching out reviews like this one, writing email, or sitting at a console during my day job in IT. Simply put, keyboards are an integral part of my life. Between work, running HTF and gaming in the evening there are days that I am using a keyboard for upwards of 15 hours (don't worry, I do make time for the gym too), but even an average day includes at least 6-8 hours at the keyboard.

For many of you who work in offices, keyboards are an integral part of your job too, but you likely use the Dell/HP/Logitech plastic slab provided by your IT department. Some of these keyboards are perfectly satisfactory and allow you to work without much in the way of interruption, frustration or ergonomic malaise. Others are a living nightmare to type on, and actually cause neck and shoulder pain. If you invest in a better keyboard like the Razer BlackWidow Chroma V2, you might discover that typing can become significantly easier, less straining on the hands, wrists and shoulders, and also more enjoyable.

With that wordy justification out of the way, let's get to it shall we?

Like the original BlackWidow Chroma the cable is protected by braided fiber sheath and feels extremely durable while still offering sufficient flex to route easily behind the desk. The surface of the keyboard remains rubberized plastic that is both grippy and durable without being too prone to showing oil from typists sweaty palms. Like the BWC, the BlackWidow Chroma V2 includes a USB port and microphone jack on the right side near the rear of the keyboard.

I am going to regurgitate the majority of this from the BWC review I published only two months ago - as little has changed in terms of the lighting or switch design.

The backlight on the keys of the BlackWidow Chroma V2 is extremely advanced and has controllable color on a per key basis with up to 16.8 million possible colors. Both brightness and color parameters can be set via Razer’s Synapse 2.0 software, and programmatic light sequences can be easily configured. This includes animated sequences like waves, strobing and tracing the movement of your fingers as you type. 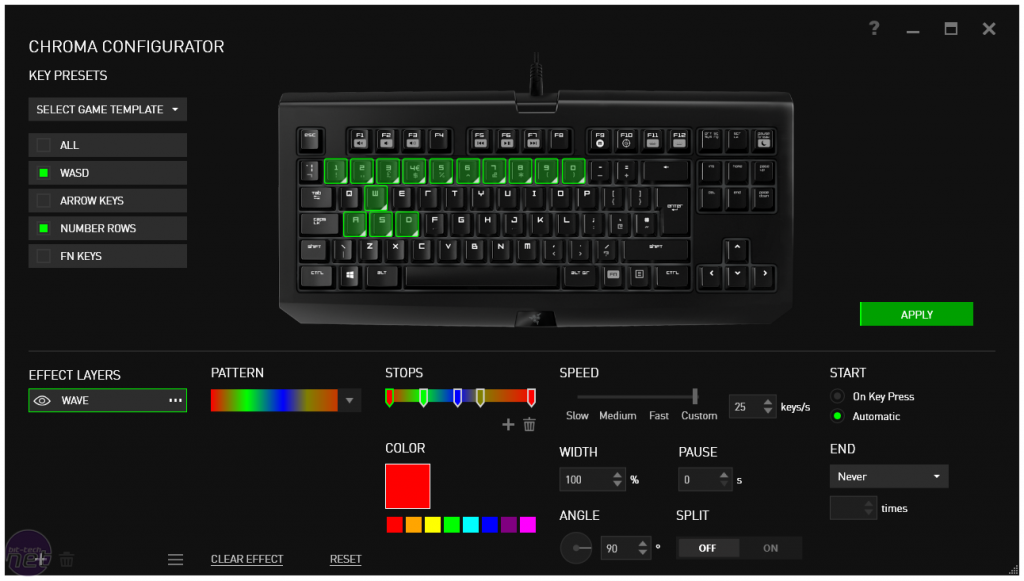 Razer still rates their switches for a duty cycle of 80 million keystrokes, and have done nothing to incite doubt in my mind yet that they won't hold up.

I'd like to personally address whoever it was on the Razer engineering team that pushed for the magnetic wrist rest. You, Sir or Madam, deserve a raise. To say that Razer’s design and implementation of this feature is appreciated would be an understatement. I can't even begin to explain how many expensive keyboards I have ruined by snapping a flimsy plastic attachment for the wrist rest when removing or re-attaching it. Razer's solution is simple, stylish and unbelievably convenient. All other keyboard makers should take note: this is how you improve a product generation after generation, and this is the only "right" way to implement a detachable wrist rest.

The result of this wrist rest is that the BlackWidow Chroma V2 has drastically improvement ergonomics from its predecessors, reducing wrist strain while making typing more comfortable. 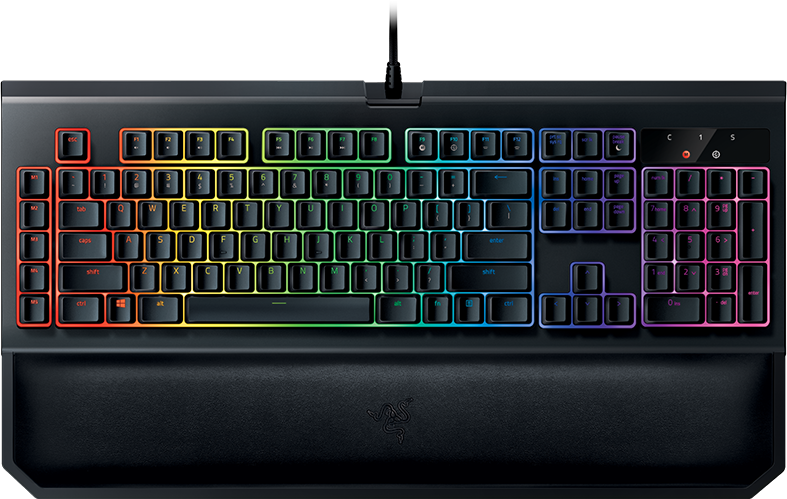 As I stated a couple of months ago, I've been a Razer customer for over a decade now and have used many of their products. Razer continues to impress me with their keyboards, which feature bulletproof durability, excellent ergonomics and stylish design. I'd love to close with a pithy suggestion for Razer to improve in their next keyboard, so why not ask for the moon: a four port USB hub built into the side of the keyboard.

Admittedly this suggestion is a lot less likely to see the light of day than my last one, but it's worth a try! Razer’s addition of a wrist rest in the BlackWidow Chroma V2 proves that they listen to customers and reviewers, and it's why they continue to build some of the best accessories on the market. If you are seeking a keyboard for any reason at all and you don't mind the appearance of the BlackWidow Chroma V2, I strongly suggest you give it a look. It doesn't get much better than this.
Read more.
Last edited: Feb 17, 2017

Shouldn't this be posted in a section other than "Blu Ray Reviews"?

This is in the Computers area of the forum. Did you see it elsewhere?

Dave Upton said:
This is in the Computers area of the forum. Did you see it elsewhere?
Click to expand...

When I made my comment, it was under "Blu ray Reviews", but it's no longer there.

Must have been on the front page. Thanks for mentioning!

I didn't see a price in the review. It's always nice to see one even if I'm perfectly satisfied with my old IBM PS2 keyboard.

sidburyjr said:
I didn't see a price in the review. It's always nice to see one even if I'm perfectly satisfied with my old IBM PS2 keyboard.
Click to expand...

Good catch, thanks for that!

These newer keyboards are a lot like the old IBM's, the switches just have a bit less travel in them.
You must log in or register to reply here.

Well...I'm back to Windows for gaming...and I bought a pre-built from Best Buy!
2 3 Tags windows