R.I.P.D. 3D arrests itself on Blu-ray in 3D with an edition that runs long on glitz and slick effects while running sadly short on soul. There isn’t much to recommend in the film beyond the occasionally interesting visual effects, some of which work quite well in 3D. A fine cast seems to be having a lot more fun than the audience, particularly Jeff Bridges and Mary-Louise Parker, both of whom waste little time going way over the top. I wish I could find something to recommend here beyond the technical specs, but this just isn’t the movie for that review. 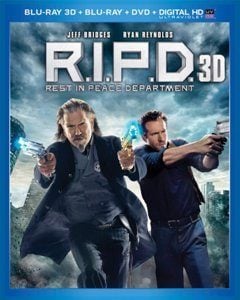 R.I.P.D. is a truly strange movie. It’s mostly a technical exercise, combining some high powered CGI with an effective use of stereoscopic 3D and an immersive sound mix. Watching the movie is an exhilarating technical experience, with plenty of wild 360 degree spins and eye popping moments of visual splendor. Which would be great if there was a good movie driving all the technical specs. Sadly, there isn’t one here. The actual story underneath all the gimmicks is a simple one, and a warmed over one at that. In the most basic terms, R.I.P.D. is about a young-ish cop (Ryan Reynolds) who finds himself working for the post-life Rest in Peace Department. The R.I.P.D. apparently prowls the Earth looking for the souls of dead people who have refused to leave their mortal lives and who must be rounded up before they morph into truly grotesque creatures and menace the living population. The young cop is paired off with a more experienced and cynical elder partner (Jeff Bridges) and the two of them go off to save the world from the usual impending apocalypse. Does this sound familiar? It should. Move a few of the proper nouns around and you’ll have a fairly concise description of Men in Black. R.I.P.D. shamelessly pulls almost its entire plot from the earlier comic book and movie. While it’s true that there was an R.I.P.D. comic book before this film, we cannot ignore that the comic book was created in the shadow of the pre-existing Men in Black comics and the 1997 movie. So for the new movie, you can substitute Ryan Reynolds for Will Smith, Jeff Bridges for Tommy Lee Jones, Mary-Louise Parker for Rip Torn and Kevin Bacon for Vincent D’Onofrio. And instead of aliens wrecking havoc and possibly dooming the Earth to ruin, the new movie has grotesque dead souls taking their turn to wreck havoc and doom the Earth to ruin. There is one bit of human feeling that tries to find some purchase, concerning the young cop’s attempts to make things right with the wife he’s leaving behind, but even this is repeatedly undermined.

Considering that a lot of resources went into this movie, not to mention what could have been a really interesting cast, it’s an unhappy moment to admit that R.I.P.D is not only unoriginal, it’s also a crashing bore. Even at only 90 minutes or so, the movie has so little of interest going on that I confess having needed to shake myself awake at times to stay with it. All of this speaks to a breakdown both in the story department and in the directing department. Where a stronger team might have been able to make this work as a meditation on life and death, or as a completely different experience than Men in Black, the storytellers here have contented themselves just to run through a quicker version of the earlier movie and comic’s beats. And in place of a firm hand on the story, we are instead presented with ever glitzier visual effects and 3D immersions. Unfortunately, as so many movies before this one have already proven, all the glitz in the world can only get you so far without a good story.

R.I.P.D. 3D is presented in a 1080p MVC transfer (avg 23mbps on the left, 10mbps on the right – with the right channel rising in bitrate as more dimensionality is presented). In terms of active 3D effects, there’s plenty to see here. Pretty much every possible opening is taken to show a sense of depth and a world that has multiple layers into the television screen. This is also a fairly bright picture, even though many key scenes take place at night. But we should also note that this is a 3D conversion, not a native 3D shoot. So while many scenes absolutely benefit from the use of 3D, there are a lot of aggressive camera whips, zooms and 360 degree spins that can be extremely jarring when combined with the 3D effect.

R.I.P.D. 3D is presented in an English DTS-HD Master Audio 5.1 mix, along with English and French DTS 5.1 mixes and an English DVS track. At least in terms of the sound, this is a great presentation. The sound happily fills all the speakers, with plenty of use of surrounds for both music and atmospheric effects. Given all the heavy apocalyptic undertones and overtones, the movie certainly makes frequent use of the subwoofer.

R.I.P.D. 3D comes with a group of featurettes, a short gag reel and a few deleted/alternate scenes actually on the 3D Blu-ray disc. The same materials are also found on the included 2D Blu-ray. The SD DVD edition is also included, which holds a smaller offering of the same materials. Instructions for obtaining a digital or ultraviolet copy of the movie are included in the packaging. But I should mention a strange element of the special features that really defies explanation to me. It’s a nice touch that the 3D Blu-ray includes all the bonus features from the 2D Blu-ray. But why does the 3D Blu-ray encode those bonus features in 3D? The materials aren’t in 3D and the encoding only serves to mean that the viewer must keep their glasses on to watch them. Watching the materials with the glasses on doesn’t add any dimensionality – it just allows the viewer to leave their 3D glasses on when not watching the movie on the disc. And if there’s one thing I have yet to hear a complaint about – it’s the issue of needing to take the glasses OFF…

I again note that all the bonus features on the 3D Blu-ray other than previews pulled down via BD-Live are MVC encoded. So you’ll need your glasses to watch them. But there’s no depth to these features – it’s just that the visual encode requires you to wear the glasses to avoid seeing them in the strange haze of unglassed 3D imagery.

Alternate Opening 1 (4:36, 1080p MVC) – An alternate opening to the movie is presented here, with Jeff Bridges’ character locating and dealing with a “Deado” to establish the parameters of the movie’s world. This opening actually works a lot better than the one that was used to open the theatrical cut.

Alternate Opening 2 (5:29, 1080p MVC) – This is another version of the alternate opening we just saw. This version gets a bit more involved and the confrontation goes a bit farther. But the end result is the same, and frankly, the first version works better.

Deleted/Alternate Scenes (7:15 Total, 1080p MVC) – Three alternate versions of existing scenes are presented here, along with one completely deleted moment. The material can be viewed individually or via a “Play All” option.

Gag Reel (3:47, 1080p MVC) – Just under 4 minutes of blown takes are shown here, usually involving a physical gag going wrong, followed by the actors cracking up or breaking character to make appropriate comments on the situation.

R.I.P.D. Motion Comics: Bringing the Avatars to Life (6:08, 1080p MVC) – This is really just a collection of animated storyboards for various sequences in the movie.

Nick’s New Avatars (1:00, 1080p MVC) – This is just a collection of alternate punchlines for the movie, involving what ND face will be given to Ryan Reynolds’ character to allow him to move in the world of the living.

Transferring R.I.P.D. – The Making Of (8:18, 1080p MVC) – This is a basic featurette about the origins of the movie and the casting of the roles. Ryan Reynolds, who championed this movie all along, notes how happy he is that Jeff Bridges agreed to play the role assigned to him.

Filming the Other Side (6:29, 1080p MVC) – This featurette covers the CGI work done to establish the Rest in Peace Department as well as the various “Deados” in the movie.

Walking Among Us: Deados & Avatars (7:25, 1080p MVC) – This featurette deals with the work done to create the various grotesque “Deados”, and all also takes some time to talk to the two actors who play the “Avatars” for Jeff Bridges and Ryan Reynolds’ characters.

Anatomy of A Shootout (7:59, 1080p MVC) – This featurette covers the extensive work that went into the climactic confrontation between heroes and villains for this movie.

On the included Blu-ray:

All the same features from the 3D disc are included on the Blu-ray, albeit in 2D. Overall, the presentation is actually easier to watch as the viewer is able to simply admire the photo-realistic content. The Blu-ray presents the movie in AVC encoding at a bitrate of about 30mb per second.

On the included DVD:

The included DVD in the package has the movie presented in an SD anamorphic transfer and a Dolby Digital 5.1 sound mix (at 448 kbps). Also on the DVD are the Deleted/Alternate scenes, the Gag Reel, and a single featurette from the Blu-ray, that being Transferring R.I.P.D. – The Making of.

R.I.P.D. 3D is sadly not much of a movie when you get right down to it. It’s certainly a virtuoso display of technical expertise – in generating wild camera spins and in using a post-production 3D conversion to the fullest extent. It’s even got an immersive sound mix. But R.I.P.D. sadly lacks the depth of a decent story in between all the technical demonstrations. The movie has a talented cast, particularly Jeff Bridges and Mary-Louise Parker, but it’s pretty much adrift without the strong hand of a good director. The 3D Blu-ray includes all the special features of the 2D Blu-ray, albeit with 3D encoding, which leaves the viewer puzzled as to why this was done in the first place. The 2D Blu-ray fares better overall, and the included DVD in the packaging has only an SD presentation of the movie, accompanied by a bare minimum of the special features normally present for any home video release. And again, the plot here is almost a complete re-run of the plot of Men in Black. I wish I could find more here to celebrate, but this isn’t that kind of movie.

I gave up in 30min's,poor ripoff of Men in Black,

Glad this was on HBO 3D on demand. Fun to watch but not to buy.
You must log in or register to reply here.