The irresistible force meets the immovable object in John McTiernan’s taut Predator. The kind of riotous action movie that helped propel star Arnold Schwarzenegger to the top of the box-office rankings, Predator is rather cleverly conceived and put together. There are stylish touches that often surprise, and this well cast and imaginatively filmed sci-fi/horror hybrid holds up beautifully today even after all the intervening years which have seen a raft of inferior sequels and other action films which have stolen moments from it and James Cameron’s Aliens to craft action spectacles that aren’t nearly as effective. In this new 3D incarnation, the lackluster application of the conversion process doesn’t make the film more compelling than it already is. There are a handful of effective dimensional shots but no more. 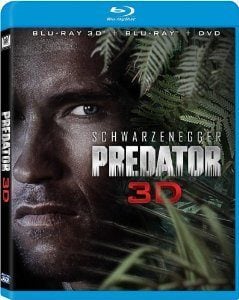 keep case in a lenticular slipcover

Tapped by General Phillips (R.G. Armstrong) to take his crack mercenary team into the jungles of South America to rescue a captured diplomat, Dutch (Arnold Schwarzenegger) and his platoon arrive only to find the mission is about something else entirely. Feeling betrayed by his longtime friend and rival Dillon (Carl Weathers), Dutch is anxious to get out of the area as soon as possible. Little does he know, however, that his squad is being stalked by an alien presence (Kevin Peter Hall) who can camouflage itself among the jungle vegetation and has brute strength and sophisticated weaponry that can make mincemeat of human beings. It’s a race to the death for the team to attempt to get back to the helicopter rendezvous point before the alien kills them all.With the movie switching gears mid-film from a military rescue scenario to a stalk and slash horror film, writers Jim Thomas and John Thomas keep things nice and simple for the audience. Director McTiernan does his part by keeping the film moving with expert pacing of the big action scenes. Once the monster begins picking the team off one by one, the director varies the methods of showing the eviscerations (or not; we sometimes hear the sounds of death rather than seeing it in the flesh) in really stylish and creative ways that keep the gore from becoming too oppressive and the men’s attitudes about impending death from being too complacent. True, in rather stereotypical macho style, some of the men foolhardily rush to their deaths instead of using their minds to prolong their lives (they miscalculate that the alien is a killing machine rather than a thinking presence who has reasoning ability), but this isn’t the first or last action film to show that. The film’s last quarter hour confrontation between the two mammoth combatants once again shows McTiernan doing imaginative things with his point of view shots, sometimes going into the alien’s head and other times showing us Dutch’s preparations for the battle (though he does hold back on some revelations to keep some surprises for later). It’s little wonder that this film’s success led the director into a string of action hits which put him at the top of the directorial heap in Hollywood for a time.Arnold Schwarzenegger still displays some stiffness and uncertainty carrying the film as he does though he’s physically imposing and certainly gets the job done. Carl Weathers does a sensational job of regaining the audience’s respect during the course of his time in the movie. Sonny Landham makes a most appealing tracker Billy while Bill Duke and Jesse Ventura do their expected badass routines with predictable results. Kevin Peter Hall’s pantomime performance as the title character is most effective.

The film’s theatrical aspect ratio of 1.85:1 has been opened out a bit to 1.78:1 at 1080p resolution using the MVC/AVC codec. The 2D transfer is the identical one from the highly denigrated 2010 release, and the 3D rendering has used this same digitally scrubbed master for its conversion. It’s obvious the film has been heavily scrubbed with massive amounts of DNR (there isn’t a speck of grain in sight), and while edge enhancement hasn’t been heavily applied, there’s enough here for it to be unmistakable on several occasions. The shots that have always been soft now take on an added mushiness that’s quite ugly (luckily, there aren’t many of those), and countenances of all the actors appear waxy and unnatural after all of the digital processing. To be fair, color is nicely saturated, and black levels are very good. The film has been divided into 25 chapters.The 3D conversion of this movie continues with Fox’s same rather lackluster results (previous 3D conversions of I, Robot and Jumper were similarly mediocre). There are a few jungle sequences where depth is impressively enhanced and character placement within the frame is striking in stereo-optic terms. But there is no forward projection, of course, and the point of view looks through the creature’s eyes were highly anticipated but are nothing special. The camouflage outline of the alien in 3D does look momentarily fetching against the jungle backgrounds, and the laser shots and flying sparks can be unquestionably eye-catching, but overall the addition of a third dimension does not make the film any more engrossing or effective.

The DTS-HD Master Audio 5.1 sound mix won’t be mistaken for more active modern action film sound mixes, but the audio engineers have done a superb job of giving the film’s firepowered action sequences real heft and body, and there isn’t much disappointing about the use of the soundfield here. Alan Silvestri’s driving score gets a nice spread through the various channels, and the LFE channel obviously gets its expected workout. Dialogue is agreeably recorded and placed into the center channel, and there are a few directionalized dialogue effects though there could have been quite a few more.

There are no bonus features on the 3D Blu-ray disc. It houses both the 3D and 2D versions of the film in high definition.All of the bonus features in this package are found on the enclosed DVD. Naturally, they are all in standard definition.Audio Commentary: Director John McTiernan contributes a relatively dreary commentary as he languidly describes his memories of making the movie. Fans of the film will want to hear what he’s got to say, but it’s a pretty long slog as the director struggles to remember the movie after being away from it for so long.If It Bleeds, We Can Kill It (28:47): a making-of documentary featuring interviews with the leading actors, the director, producer, writers, director of photography, production designer, stunt coordinator, and special effects supervisor, all discussing their work on the project.Inside Predator: an omnibus title for a series of seven short featurettes on various aspects of the production: “Classified Action (5:22) gives details on the stunt work, “The Unseen Arnold” (4:44) is a homage to the star of the movie, “Old Painless” (3:31) details the gatling gun used by Jesse Ventura in the movie, “The Life Inside” (4:27) is a loving tribute to the late Kevin Peter Hall who played the alien, “Camouflage” (4:56) introduces the film’s makeup artist talking about the various facial camouflage designs for the leading actors, “Welcome to the Jungle” (2:41) deals with various location stories told by the cinematographer and production designer, and “Character Design” (4:42) has the actors talking about the characters they play.Red Suit Effects (0:58, 0:54, 0:17): three brief vignettes showing a red suit standing in for the alien.Camouflage Effects (0:36, 1:17): two brief vignettes showing tests for the camouflage effect for the alien.Deleted Scene/Outtakes (1:44, 0:28, 2:12, 0:57): must be viewed separately.

For those who love the film Predator and are 3D capable, the new 3D conversion of the film offers a passably entertaining experience though this new Blu-ray package does not port over all of the bonus features from the previous 2010 Blu-ray release, and it does use the same overly processed transfer that many found so unsatisfactory. If you want this film in 3D, this is all you're ever likely to get, but it’s hard to work up much of a recommendation for it.

The 3D does sound like a novelty disc at best. I did order this at the current discounted price.

I really wonder how well these 3D conversions of older titles are selling. In the case of Predator, a title notorious for having one of the worst-reviewed Blu-ray releases in the format's history, a new 2D master would certainly have been a stronger selling point for me.

Thanks for the review, Matt. Definitely passing, though.
You must log in or register to reply here.