Possessed is a chilling, atmospheric and stylish film noir about a woman who is obsessed with a lover who has jilted her. It would not surprise me if the film influenced subsequent films such as Play Misty for Me and Fatal Attraction. This outstanding feature from 1947 is yet another first-class Blu-ray release from the Warner Archive. 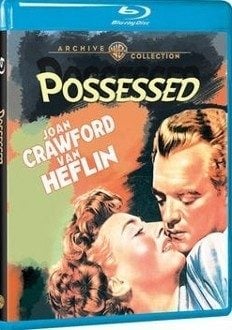 Hell hath no fury like a woman scorned. Possessed opens on a semi-deserted street early one morning in Los Angeles. A woman (Joan Crawford) is wandering about in a daze while occasionally mistaking passing men for someone named "David." She stops a crosstown cable car and implores the motorman, "I'm looking for David." He looks at her for a moment before gruffly responding, "He isn't here, lady" and closes the door. She then walks up to several men who are leaving a church service, but David is not among them. She then stops at a small café but is unable to verbally respond when she is asked if she wants a cup of coffee. It immediately becomes obvious that there is something seriously wrong with her when she falls into a catatonic state.The woman is taken by ambulance to Los Angeles Municipal Hospital. As she is wheeled in on a gurney, we see the hospital as she sees it - all ceiling lights and mere glimpses of people who step aside as the gurney passes them by. The doctors who examine her rule out any physical injury and order her to be taken to the psycho ward, where she is seen by a psychiatrist, Dr. Willard (Stanley Ridges). The woman is unable to answer simple questions, so Dr. Willard decides to treat her with narcosynthesis, a procedure involving the injection of narcotics which had proven to be effective in getting patients who suffered from catatonic mutism to speak lucidly for short periods of time. Once the treatment takes effect, the woman's story is told in a series of flashbacks.Her name, we learn, is Louise Howell. We meet her in a house on a moonlit lake which is the home of an engineer, David Sutton (Van Heflin). Louise is complaining about them not having enough time together while he plays a piece by composer Robert Schumann on the piano. It soon becomes clear that Louise wants to marry David, but as he puts it, "It's a duet and I like to play solo...knowing you has been wonderful, but you hang on to me too hard."David tells Louise that they shouldn’t see each other for a while. They get into his boat and he takes her to her home on the other side of the lake. When he drops her off and motors away she is in tears, and we see for the first time that her home is not her house. It is owned by a wealthy businessman, Dean Graham (Raymond Massey), and Louise is a live-in nurse who cares for Graham's ailing wife, Pauline. Mrs. Graham has mistakenly concluded that Louise and her husband have been engaged in an affair, while for his part Dean has no idea that Louise has been romantically involved with David. Dean then offers David an engineering job in Canada, a job which suits David at least in part because it takes him far away from Louise. After David leaves for Canada, Pauline drowns in the lake - an apparent suicide - and when Dean's daughter Carol (Geraldine Brooks) comes home from college for the funeral, she angrily repeats her mother's accusation that Louise has maneuvering to become the new Mrs. Graham.On the surface Louise's life improves after David’s departure and the death of Pauline, but she cannot shake her obsession with David - an obsession which threatens to ruin her life, as well as the lives of others.Joan Crawford is outstanding in a role which earned her an Academy Award nomination for Best Actress (she lost to Loretta Young in The Farmer's Daughter). If any actress had a look which could kill, it was Joan Crawford. Van Heflin holds his own as David, a likeable man who makes no bones about the fact that he has no intention of giving up his bachelor status. The lovely Geraldine Brooks is intense and believable in her second film role, and Raymond Massey is restrained and dignified as the remarkably patient Dean Graham. Director Curtis Bernhardt had a great interest in making films about people with psychological issues (see, for example, Conflict and The High Wall) and here he does an excellent job of establishing exceptional noir mood and atmosphere. The director demonstrates obvious sympathy for people who suffer from neuroses, and the film's one weakness is allowing Dr. Willard to become preachy about the need for early intervention for people who suffer from mental illness. That is a minor caveat, however.Possessed is a riveting and disturbing film noir which viewers will not easily forget.

That 1080p black and white image is encoded with the AVC codec and is properly framed at 1.37:1. As our resident expert Robert A. Harris has noted, this Blu-ray was mastered from the original nitrate camera negative, and the result is a positively brilliant rendition of Joseph Valentine's superb cinematography. Some viewers may feel that there is bit too much film grain, but I am satisfied that this presentation is exactly how the film is supposed to look. It is yet another in what is turning into an impressive string of Blu-ray releases from the Warner Archive.Readers are encouraged to read all of Mr. Harris' comments about Possessed:A few words about...™ Possessed -- in Blu-ray

The DTS HD-MA 2.0 mono soundtrack is as good as it could possibly be. From the pulsating piano music over the opening credits to the entirety of Franz Waxman's evocative score, there is nary an instance of distortion or other anomalies. Dialogue is distinct and clear throughout, but there are English subtitles available for viewers who need them.

The extras on this Blu-ray disc have all been ported over from the 2005 DVD. Included is an insightful and informative commentary track by film historian Drew Caspar."Possessed: The Quintessential Film Noir" is a short (9 minutes) featurette in which several film historians discuss film noir and the place which Possessed holds within that genre.The film's theatrical trailer does a nice job of setting up the story without giving away too much of the plot, and it is in good shape.

Possessed is an important and impressive example of film noir, and it has been given sterling Blu-ray treatment by Warner Brothers. It is highly recommended.Readers who are interested in purchasing it can find it at the Warner Archive website.

Many thanks. Good review.

I'm very pleased with this disc although I tolerated only about five minutes of Drew Caspar's commentary before switching off.

I'm no Joan Crawford fan but I thought this was one her of best performances. I thought the acting throughout was good, particularly from Raymond Massey in an almost impossible part. No man is as noble as that!

I was surprised by the hostile reaction to David Sutton (the Van Heflin character) on IMDB. I thought he was a normal man, taking his pleasure where he could find it. He tried to let Louise down gently but she wouldn't take the hint.
You must log in or register to reply here.

A few words about…™ Our Dancing Daughters – in Blu-ray