One of the most light-hearted and amusing larks from Studio Ghibli, Hayao Miyazaki’s Porco Rosso is much more concerned with having fun than it is in conveying any kind of message (there is a mild one concerning equality for women, but it’s gotten over with rather quickly and not resumed). With the studio’s resident animation genius behind the scenes and working with strong animators who turn out some of their most awe-inspiring work, Porco Rosso is lots of fun for both kids and adults. 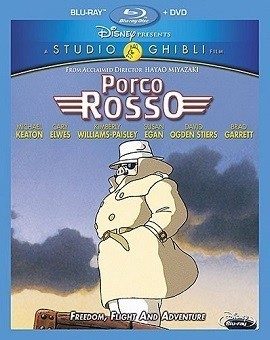 Having been the flying “Ace of the Adriatic” for Italy during the First World War, Marco has been turned into a pig by magic and is now known as Porco Rosso (Shûichirô Moriyama, Michael Keaton in English), but objecting to the rise of fascism in Italy, he’s now a free-lance bounty hunter and feared throughout the Mediterranean, striking fear into the hearts of the air pirates who have been stealing ships’ cargoes and kidnapping children for ransom but always thwarted by Porco. The pirates have had enough of his interference, so they band together and hire ace American pilot Donald Curtis (Akio Ôtsuka, Cary Elwes in English) to lead them. Curtis wins their first encounter when Porco’s plane finally falls apart, and taking it to Milan for repairs, he’s shocked that Piccolo (Bunshi Katsura, David Ogden Stiers in English), his longtime mechanic, now allows his feisty granddaughter Fio (Akemi Okamura, Kimberly Williams in English) to design and supervise plane maintenance. But she and her all-female crew get the plane back in tip-top shape as Porco readies for a final showdown with his nemesis.

Writer-director Hayao Miyazaki literally gives his film flight with the exceptional flying sequences which never fail to inspire and impress, sometimes so intricate and extraordinarily animated that they appear almost as 3D images. The two dogfights that Porco and Curtis engage in are both among the film’s high spots, and even when Porco is soaring in solitary bliss or remembering an out-of-body experience when he saw his deceased flying mates soar toward a special kind of celestial afterlife, the viewer’s thrill at watching these aerial sequences transpire makes up for any small lapses in storytelling. Miyazaki doesn’t do a great job in explaining the spell that has changed Marco into Porco (though with his initial aversion to the women working on his aircraft, he has become quite literally a male chauvinist pig), and he leaves his eventual fate to our own imaginations in the film’s climactic moments. Still, he mines a lot of comic mileage out of many porcine references, puns, and putdowns even if the showdown between Curtis and Porco goes from an exciting aerial one to one involving fisticuffs on the ground (water actually) which goes on too long for too little payoff. There’s also a spottily developed subplot involving nightclub owner/singer Gina (Tokiko Katô, Susan Egan in English) who was married to Porco’s best friend and now carries a torch for Porco who’s too much of a loner to notice or care.

Once again, both casts are excellent though each seems to go for different subtleties in performance. Shûichirô Moriyama plays Porco tough with more edge while Michael Keaton invests his Porco with more irony and less fierceness. David Ogden Stiers goes for a more light-hearted grandfather than Japanese counterpart Bunshi Katsura. Both Akio Ôtsuka and Cary Elwes carry off the egotistical nature of Donald Curtis very well though Elwes imbues his creation with a broad Texas accent for some downhome flavor. Equally matched are Akemi Okamura and Kimberly Williams as Fio, both high-spirited and enthusiastic in equal measure. Tokiko Katô and Susan Egan both handle Gina’s singing chores very nicely.

The film’s theatrical 1.85:1 aspect ratio has been faithfully delivered in a 1080p transfer using the AVC codec. Sharpness and clarity are exceptionally good throughout the presentation, and color richness and depth are likewise handled astutely. There is no banding present in the transfer, and lines in the animation appear solid and without aliasing. The English subtitles are in white and are quite easy to read. The movie has been divided into 12 chapters.

Both the Japanese and English-language audio tracks are presented in DTS-HD Master Audio 2.0 stereo surround. There’s an exhilarating spread of the glorious Joe Hisaishi music and sound effects through the soundstage, and dialogue has been superbly recorded and is presented in the center channel.

Behind the Microphone (7:05, SD): shows us some behind-the-scenes looks at the recording of the English language soundtrack for the movie with comments from Michael Keaton, Cary Elwes, Susan Egan, Kimberly Williams, David Ogden Stiers, and Brad Garrett (who plays the gruff head of the air pirates).

Original Japanese Storyboards (1:33:18, HD): the Japanese version of the film may be viewed with storyboards replacing the finished animation.

Trailers and Promotions (7:55, HD): three theatrical trailers and one brief promotional film are presented in montage.

Toshio Suzuki Interview (3:22, SD): the film’s producer is asked some questions about the studio’s most famous animation director Hayao Miyazaki.

DVD Copy: enclosed in the case.

Another charming and altogether funny entry in the Studio Ghibli archives, Hayao Miyazaki’s Porco Rosso is a delightful romp for children and adults. The Blu-ray is a pleasure to watch and listen to either in the original Japanese or in English. Recommended!

OOoh I'm a bit green with jealously that you get to watch this now. I'm holding off until I can use it as title to join the Disney Movie Club in [too] many months.


Thanks for the review, Matt!!!

I wasn't expecting this movie to be as good as it looked like it would be. . .but it was!

Okay, quick question - did Disney fuck up the subtitles like they did on Kiki, or are they good?
You must log in or register to reply here.