There were more than a few raised eyebrows when 2014 Oscar nominations for feature animation didn’t include The LEGO Movie or The Book of Life. Instead, one of the available slots was filled by The Tale of Princess Kaguya co-directed by Isao Takahata. The Japanese director is no stranger to animation fans, however, as he’s been a part of Studio Ghibli for quite some time. His 1994 fantasy Pom Poko (the title shortened for stateside release) brings forth the strong comic and dramatic sides of the animator’s art with an environmental message woven through the narrative that certainly seems to come from the heart. Disney’s latest Studio Ghibli release offers the film in its original Japanese as well as with an English-language cast. 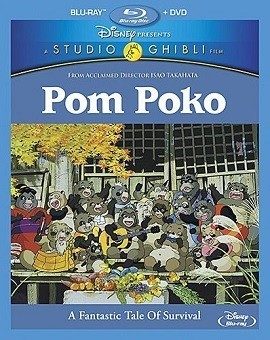 With Japanese land at a premium and the population ever-expanding, the government in the 1960s began a country-wide developmental project to level forests and countryside and erect high-rise living accommodations for its expanding citizenry. The raccoons of Tama Hills are frightened that their longtime home will go the way of so many others and be leveled by man, so they band together for a five-year plan to put a stop to man’s encroachment on their homes. Led by elders Oroku (Nijiko Kiyokawa, Tress MacNeille in English) and Seizaemon (Norihei Miki, J.K. Simmons in English), the two encourage their fellow raccoons to use their transformative powers to either slow down or stop man’s efforts to wipe out their homes. While each strike is momentarily successful in postponing the inevitable, the government simply overlooks the slight diversions and goes on with the program. That’s when the fiery warrior Gonta (Shigeru Izumiya, Clancy Brown in English) decides they must fight for real and even sacrifice their lives if any point is going to be made with the slow-witted men they’re challenging.

Isao Takahata’s bittersweet screenplay (adapted from his own original story) trundles a bit throughout stretching the film to almost two hours, far too long for such a simple story though the film’s themes are never obscured and the filmmakers don’t shy away from violent confrontations despite the many lighter moments in the film’s first half. There are many forks along the road before we get to that sober final face-off between raccoons and man including a love story between Shokichi (Makoto Nonomura, Jonathan Taylor Thomas in English) and Okiyo (Yuriko Ishida, Jillian Bowen in English) and a lengthy middle period while the raccoons party while three transformation masters are sent for. In fact, the numerous parties the coons enjoy (the narration makes it clear they’d rather party than do anything else) might have been abbreviated to cut down on some of the running time. While the animation is always a joy to watch, the raccoon characters sometimes take on more the look of bears than coons. There’s a dazzling sequence where the raccoons who can transform into any object, animal, or human put on an elaborate charade to distract the humans from continuing with their destructive efforts, and a very drily humorous scene where two men getting drunker by the minute fail to notice any of the transformative raccoon shenanigans going on behind them. But in the main, the film’s strong message of environmental conservation sometimes gets a tiny bit lost due to the filmmakers’ desire to wow us with their expertise with pen and ink. Still, there’s a lovely moment at the end when the lovers, separated by their efforts at blending in with the times, have a happy reunion as the call of the wild proves too strong to resist.

The Japanese and English casts are both strong and effective. The English cast seems noticeably younger and more effervescent in their playing of the roles while the Japanese cast seems older and heavier, stressing the more serious qualities of the story and sometimes skimping on the lighter moments of comedy. Tops among the Japanese cast is Shigeru Izumiya as the warrior Gonta. He sounds as if he could leap from the recording booth onto a samurai stage with only a change of wardrobe. Maurice Lamarche’s English narration is sprightlier and more amusingly tongue-in-cheek than Shinchô Kokontei’s Japanese original, but something may have been lost on me in translation.

The film is presented in its theatrical 1.85:1 aspect ratio and is offered in 1080p resolution using the AVC codec. Lines are sharply drawn and solid throughout, and color is rich and full with no signs of bleeding even with the boldest reds and purples. There is no banding to be seen at all, and black levels are rich and deep. The white English subtitles are always very easy to read though they occasionally pop up at the top of the screen and are gone before one can read them comfortably. The film has been divided into 20 chapters.

Both the Japanese and English language tracks have been given a DTS-HD Master Audio 2.0 stereo sound mix. The English version sounds more aggressively stereophonic than the Japanese one, but the latter is no slouch at all in making itself fill the room. The numerous music and songs by Koryu, Manto Watanobe, Yoko Ino, and Masaru Goto get exceptional treatment in the recording studio and sound marvelous. Dialogue has been nicely recorded as well and has been placed in the center channel.

Japanese Storyboards (1:59:08, HD): the entire film can be watched in Japanese (with English subtitles) with the storyboards in place of the finished animation.

While Pom Poko isn’t quite a patch on some of the great films of Studio Ghibli’s master craftsman Hayao Miyazaki, Isao Takahata’s film is a charming, fanciful little apocryphal tale. The new Blu-ray offers the original Japanese for purists along with an English-language track for those who’d rather not read subtitles, both in fine lossless encodes and with a sparkling, reference quality picture. Recommended for those so inclined toward Japanese animation.

Interesting. I've never even heard of this one! Got to add it to my wishlist for future reference.

The animals drawn doesn't always look racoony because they're not racoons -- they're Tanuki aka Japanese Raccoon Dog, which are native to Japan. They're known for having enormous fuzzy testicles, which is something the film references a few times.

Andrew Pierce said:
The animals drawn doesn't always look racoony because they're not racoons -- they're Tanuki aka Japanese Raccoon Dog, which are native to Japan. They're known for having enormous fuzzy testicles, which is something the film references a few times.
Click to expand...

In Japanese lore, Tanuki are masters in shapeshifting...

(Pom Poko, itself, is one of the many examples where Tanuki is improperly translated...you wouldn't know...unless you knew about other Japanese animation. For us 'Mericans...you can blame Nintendo. Mario bros "power up" was a flying racoon...in a "tanooki suit")