Places in the Heart Blu-ray Review

Robert Benton has not been a prolific movie director, with only eleven films on his directorial resume, but his work includes serious dramas such as Kramer vs. Kramer, Still of the Night, and Nobody's Fool. Actors respect him, which is why he has been able to attract such talented performers as Paul Newman, Meryl Streep, Dustin Hoffman, Gene Hackman, and Susan Sarandon (to name just a few) to work on his projects. One of Benton’s best films, Places in the Heart, is now available as an outstanding Blu-ray from Twilight Time. 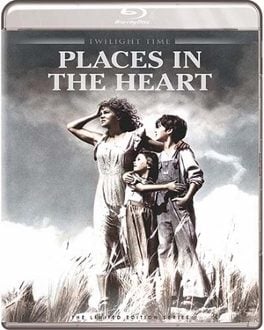 Robert Benton grew up in Waxahachie, Texas during the Great Depression, and there is clearly a strong autobiographical aspect to Places in the Heart. He had previously mined the Depression era with his screenplay for Bonnie and Clyde in 1967. The same attention to period detail is evident in Places in the Heart.

The film opens on a Sunday in Waxahachie in 1935, and Edna Spalding (Sally Field) is sitting down for dinner with her husband and two children. Her husband happens to be the local sheriff, and dinner is interrupted when he has to head down to the railroad depot to respond to a disturbance. A black teenage boy has gotten drunk and is firing a pistol into the air. When Sheriff Spalding tells him to hand over the gun, the boy fires a couple of more shots until the chamber apparently is empty. Unbeknownst to the youngster, there is still one bullet in the gun. He aims the gun at the sheriff and fires, accidentally killing the law officer on the spot.

There is no social safety net in 1935. There is no workers' compensation and no death benefit, not even for the widow of the town's sheriff. The personal grief which Edna feels over losing her husband is overwhelmed by the knowledge that she has no idea how she is going to be able to support her children. She is paid a visit by the local banker, who tells her that she has little money in the bank and a mortgage payment is due in a few months. He urges her to sell the house and move in with relatives (and perhaps even split up her children) until she can somehow get back on her feet.

The local men respond to the killing by tying the boy to the back of a pickup truck and dragging him through town until he is dead. They even stop in front of Edna's house, as if the sight of the dead boy is going to be a consolation to her. It apparently never occurs to the men that taking up a collection would be more beneficial to Edna.

Edna's sister Margaret Lomax (Lindsay Crouse) runs a beauty shop and supports her apparently shiftless husband, Wayne (Ed Harris). Wayne is surreptitiously carrying on an affair with a married woman, Viola Kelsey (Amy Madigan), who also happens to be Margaret's best friend. Edna asks Margaret if she could work in the beauty shop, but her sister says that she barely has enough business to make ends meet. Things look fairly hopeless for Edna, but two developments give her some reason be to hopeful.

A black drifter named Moze (Danny Glover) knocks on her door, looking for work. Edna cannot afford to hire anyone, but she fixes a meal for him. He reciprocates by chopping firewood for her, and he suggests to her that she has enough good land to make money by growing cotton. Edna initially dismisses him, but later decides to give it a go. Meanwhile, the banker who has threatened to foreclose on Edna has a blind and cranky relative named Mr. Will (John Malkovich) living with him. The banker suggests that Edna could generate some income by taking on Mr. Will as a boarder - although there is a strong impression that the banker really just wants to get Mr. Will out of his house.

Place in the Heart proceeds at a leisurely pace. One of director Benton's objectives is to paint an evocative picture of his home town during difficult times, so the story occasionally focuses on the townspeople and includes a scene of a devastating tornado which causes Viola, a schoolteacher, to reassess where her life is going. In the commentary track Sally Field points out that the original screenplay gave equal time to the travails of Wayne, Margaret, and Viola, but during rehearsal it became apparent that the central focus would be on Edna, Moze, and Mr. Will. Sally Field deservedly took home her second Best Actress Academy Award for her gritty, resilient performance as Edna. Danny Glover, Ed Harris, Lindsay Crouse, John Malkovich, and Amy Madigan all turn in fine performances in supporting roles, with Crouse and Malkovich garnering Academy Award nominations. The one jarring note to me is the character of Mr. Will, who starts out as a dyspeptic loner who throws a fit when Edna's children damage one of his phonograph records, but almost overnight he turns into a valued friend. That caveat notwithstanding, director Benton received an Academy Award for his screenplay and he also was nominated for Best Director, losing out to Milos Forman (Amadeus).

The video presentation of Places in the Heart is excellent. The 1080p 1.85:1 image is crisply delivered via the AVC codec. The color palette is deliberately muted to capture the essence of a dusty, arid area of 1930s Texas. The image is consistently sharp, black levels are strong, and contrast is consistent throughout the film. The transfer is immaculate, with not even a hint of age-related damage. In short, this is exactly the kind of Blu-ray we have come to expect to see from the Sony catalog.

The mono soundtrack is presented in 1.0 DTS HD-MA, and it is very good. Dialogue is clear and understandable throughout, and there are English SDH subtitles available for viewers who need them. There are several musical numbers during dance scenes, and the fidelity is excellent. The mono soundtrack even delivers some impressive punch during the tornado scene.

The limited extras on this Blu-ray include the film's theatrical trailer and an excellent, informative, new commentary track featuring Nick Redman of Twilight Time and Sally Field. Ms. Field provides many interesting insights and she is effusive in her praise for Benton and her fellow actors.

Also included is an illustrated booklet with a wonderful essay by Julie Kirgo.

An isolated audio track features the score by composer John Kander, who also worked with Robert Benton on Still of the Night.

Places in the Heart is a treat for anyone who enjoys seeing an ensemble cast of some of our best actors at work. It also is a chilling reminder of what life was like in a time when widows and fatherless children were expected to fend for themselves, and it unflinchingly portrays the suffering they had to endure in order to survive a tragedy.

Places in the Hearts has been released in a limited edition of 3,000 copies, so readers interested in purchasing it should go the Screen Archives website or the Twilight Time website to confirm that it is still available.

Thanks Richard. Love this film. That final shot is a killer. Excellent blu-ray, with a terrific commentary.

I was on the fence, but with the inclusion of the new Sally Field commentary, this became a must purchase.


Thanks, TT, for going the extra mile to add new bonus content that merits a purchase.

One of the greatest movies from the 80's in a stunning transfer and with Sally's commentary to boot. Would have preferred more extras but will NEVER poo-poo the efforts expended on catalog when the studio has so obviously invested body and soul to ensure the image and sound are as perfect as hi-def can offer. This one was an obvious must have for me - with or without the commentary. But with is decidedly better!
You must log in or register to reply here.