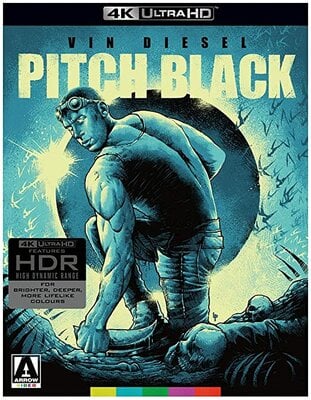 Cool! I didn’t expect this one to be released in UHD. Will be purchasing.

Jeffrey D said:
Cool! I didn’t expect this one to be released in UHD. Will be purchasing.
Click to expand...

I did because it's HDR fodder with all the shadow detail and light effects.
Reactions: jayembee

Jeffrey D said:
Cool! I didn’t expect this one to be released in UHD. Will be purchasing.
Click to expand...

You guys gonna pay the $50? Yeah, I know, it’ll come down. $50 is a long ways to come down from. Also, just a 5.1 track and I was hoping for Atmos. That opening crash landing alone is worth having it in Atmos.

The commentaries are not new, but I don’t remember my blu ray having two cuts. That could make a double dip worthwhile, but it’s going to have to be $20 before I’ll consider.

This was a sleeper hit, if I remember correctly, but it looked like a big budget movie that really worked. The sequels that had money, for me, weren’t so good.

Also only The Chronicles Of Riddick was big budget. Riddick went back to its low budget roots. I love all three films.
Reactions: Neil Middlemiss and jayembee

Johnny Angell said:
You guys gonna pay the $50? Yeah, I know, it’ll come down. $50 is a long ways to come down from. Also, just a 5.1 track and I was hoping for Atmos. That opening crash landing alone is worth having it in Atmos.

The commentaries are not new, but I don’t remember my blu ray having two cuts. That could make a double dip worthwhile, but it’s going to have to be $20 before I’ll consider.

This was a sleeper hit, if I remember correctly, but it looked like a big budget movie that really worked. The sequels that had money, for me, weren’t so good.
Click to expand...

As far as I know, every edition of Pitch Black since it's first home video release on DVD has had both the Theatrical and Director's cuts on them. The commentaries aren't new, but there are several new extras, including six interviews (how long they'll be is anyone's guess), and this release will be the first one ever to include Into Pitch Black, a made-for-the-Sci-Fi-Channel hour-long special. While it's largely a "clip show" of scenes from the movie, there is extra-textual narrative material related to the film, but not from it.

On edit: I have to take that back. The original DVD release were actually two separate DVD releases: one for each cut. But I'm sure that every BD release had both cuts.

And the animated film, Dark Fury, which provides a link between Pitch Black and Chronicles of Riddick. Now, this is not new, as it's been released on its own, as well as in a couple of collections of the films. However...it's also not clear from the rather odd description -- "in 16:9 widescreen with DTS-HD MA 5.1 audio" -- whether it'll be in SD (like all of its previous releases) or in HD. The audio description sounds like it would be HD, but the "16:9 widescreen" description of the video sounds like it's SD.
Last edited: May 31, 2020

Tino said:
I love all three films.
Click to expand...

I wouldn't say I "love" Riddick, which seemed to me to be a virtual rehash of the first movie. But I sincerely loved Chronicles of Riddick, partly because it tried to be something other than a rehash of Pitch Black, but also because it's characters, design, and cinematography reminded me of a cross between 1970s Jack Kirby comics and graphic novels by the French writer/artist Philippe Druillet.
Reactions: sleroi and Tino

According to Blu-ray dot com the audio will be 5.1. If true, this is very disappointing. The opening crash landing in atmos would be worth the price of admission alone.

BTW, autocorrect will not let me correctly spell the name of the website. It kept sticking in the hyphen. And it’s down to $20 on Amazon.

Never mind. Amazon lists “original 5.1” as a feature. Crap. This may have been a B movie release but it’s an A quality movie.

I'll be tempted by this one later. It was a clever little movie, and takes me back to the marvelous time of mid-budget scifi movies in the late '90s and early '00s.

Will this movie benefit visually from 4K? It’s always had (intentionally) that washed-out look. I really want to buy this one but if I’m just getting what’s already on my currently blu ray, why spend even $20?

Is there a compelling reason to buy this 4K release if I already the blu ray?

Hard to say until we start seeing some reviews.
Reactions: Tino

I took a chance at $20, as I really like this film. Considering it's from a small media company in Arrow, I thought that was a very good price for a 4K version.
Reactions: dpippel

It would be a no brainer purchase if it had atmos.

Mine arrived yesterday. Yeah, 5.1 DTS-HD is disappointing. I pre-ordered it when it hit $20, which seems to be the lowest it's been. Maybe I'll watch it tonight.
Reactions: dpippel

The audio situation is indeed a bummer, but let us know how it looks if you get down to it tonight, John.

Here's my quick and dirty impressions. The image ranges from pretty good to not so good. It was a low budget affair, and where the image hurts the most to me is some of the night shots. Part of the problem is I don't think those scenes were lit very well. I thought the bright, daylight shots actually benefited from Dolby Vision to make it "feel" oppressively hot.

The soundtrack is rather uninvolving and kind of flat. Yeah, Atmos would have been nice for the crash scene, but where it really could have made an impact is the sequence late in the film where they are moving through the canyon and the creatures are flying around over their heads, attacking them and each other. I doubt Arrow had the resources or opportunity to do the kind of remastering that would have made the soundtrack what it could be though. I suspect they released what they were given. It's not Criterion, after all.

Is it worth the price? I'd have to compare it to the BR, which I also have. I've bought this three times now, including seeing it in the theater. I realize I've also gotten spoiled by some of the films I've watched lately in 4K, like BladeRunner 2049 and especially the 2020 release of Emma, which is about as visually perfect as anything I've ever seen.
Reactions: dpippel

So far, I’m not reading anything to compel me to upgrade my blu. That’s too bad since this is a favorite film. It gets watched a couple times a year.