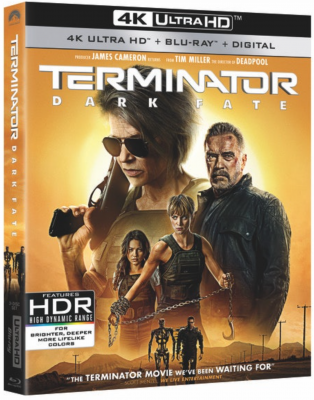 
The Digital*, 4K Ultra HD, and Blu-ray releases are packed with over an hour of bonus content, including deleted and extended scenes, in-depth featurettes taking fans through the process of reimagining the world after Judgment Day, a look at the climactic final showdown, and a visual effects breakdown.


In addition, the Digital release will include access to two more featurettes and previz sequences showcasing how the action was planned out prior to filming. Plus, select digital platforms will offer film commentary by director Tim Miller and editor Julian Clarke, as well as an introduction and commentary on the deleted scenes


The 4K Ultra HD disc and 4K Ultra HD Digital releases feature Dolby Vision®, which brings entertainment to life through ultra-vivid picture quality with spectacular colors, highlights that are up to 40 times brighter, and blacks that are 10 times darker**. The film also boasts a Dolby Atmos® soundtrack remixed specifically for the home to place audio anywhere in the room, including overhead**. In addition, both the 4K Ultra HD and Blu-ray Combo Packs include access to a Digital copy of the film.

Decades after Sarah Connor (Linda Hamilton) prevented Judgment Day, a lethal new Terminator is sent to eliminate the future leader of the resistance. In a fight to save mankind, battle-hardened Sarah teams up with an unexpected ally (Arnold Schwarzenegger) and an enhanced super soldier to stop the deadliest Terminator yet. Humanity's fate hangs in the balance in this action-packed thrill ride from Tim Miller, the director of Deadpool, and producer James Cameron.

ONLY AVAILABLE ON DIGITAL*

In Association with TENCENT PICTURES A LIGHTSTORM ENTERTAINMENT / SKYDANCE Production

Disappointing that the commentary track is only available on digital, not the physical media.

Jeffrey D said:
Disappointing that the commentary track is only available on digital, not the physical media.
Click to expand...

Jeffrey D said:
Disappointing that the commentary track is only available on digital, not the physical media.
Click to expand...

physical media version includes code for digital version, so you still get access to it by buying the disc.
Reactions: Tino and Neil S. Bulk
J

Josh Steinberg said:
physical media version includes code for digital version, so you still get access to it by buying the disc.
Click to expand...

Once upon a time none of us knew how to do discs either.

It's easy just ask us and we can help you through the process.
Reactions: Tino and Josh Steinberg

Takes all of about 10 minutes and then you’ll be up and running.

Was this movie in 3D?

Johnny Angell said:
Was this movie in 3D?
Click to expand...