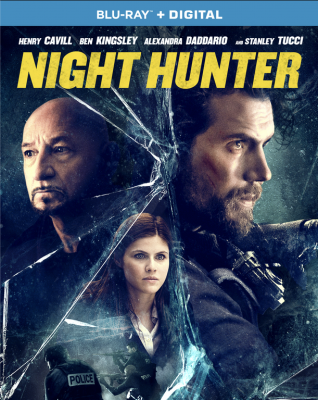 Now in Theaters, on Digital and On Demand


​
HOLLYWOOD, Calif. – Henry Cavill and Academy Award® winner* Ben Kingsley star in the pulse-pounding thriller NIGHT HUNTER, now in theaters, on Digital, and On Demand. The movie will arrive on Blu-ray and DVD October 15, 2019 from Paramount Home Entertainment.


When police detective Marshall (Henry Cavill) and local vigilante Cooper (Ben Kingsley) arrest a serial killer targeting women, they discover his game has just begun. The hunt is on as the murderer masterminds a series of deadly attacks from behind bars. Now in a desperate race against time, Marshall and Cooper fight to stay one step ahead of their suspect’s deadly plan. Also starring Alexandra Daddario (“True Detective”) and Golden Globe winner** Stanley Tucci, NIGHT HUNTER is an action-packed thriller that will shock you at every turn.


The NIGHT HUNTER Blu-ray includes access to a Digital copy of the film.

U.S. Rating: R for disturbing and violent content, language throughout, and some sexual references

** 2001, Best Performance by a Supporting Actor in a Series, Miniseries or Television Film, Conspiracy

“ACADEMY AWARD®” is the trademark and service mark of the Academy of Motion Picture Arts and Sciences.