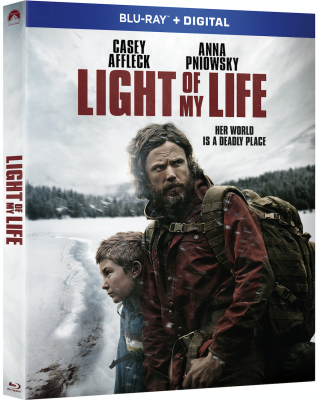 LIGHT OF MY LIFE

Now in Theaters, on Digital and On Demand

HOLLYWOOD, Calif. – Academy Award® winner* Casey Affleck writes, directs and delivers “a superb performance” (Fionnuala Halligan, Screen Daily) in the “truly breathtaking” (Paul Heath, THN) survivalist thriller LIGHT OF MY LIFE, which is now in theaters, on Digital, and On Demand. The movie will arrive on Blu-ray and DVD October 8, 2019 from Paramount Home Entertainment.


A decade after a plague has wiped out nearly all of the world’s female population, a father (Affleck) and daughter live on the outskirts of what’s left of civilization as they once knew it. Disguising his daughter as a boy, the father struggles to protect her from newfound threats as they are forced from their home into dangerous territory. Prepared to defend his daughter at all costs, their bond and the character of humanity is tested. LIGHT OF MY LIFE also stars newcomer Anna Pniowsky.


The LIGHT OF MY LIFE Blu-ray includes access to a Digital copy of the film.


LIGHT OF MY LIFE

U.S. Rating: R for some violence