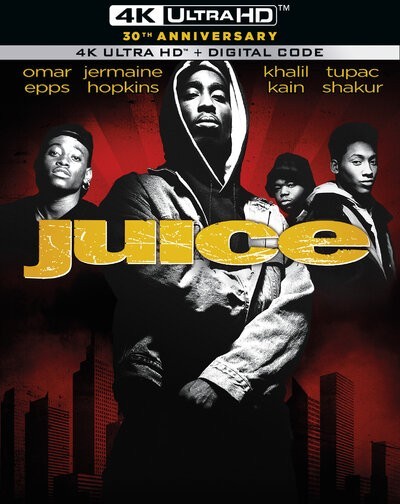 ​
A powerful morality tale steeped in 90s urban culture, JUICE marked the featuredirectorial debut of acclaimed cinematographer Ernest R. Dickerson and the first starring roles for Omar Epps and an electrifying Tupac Shakur. 30 years later, the gritty and influential film continues to be celebrated for its realistic portrayal of Harlem life, the early New York hip hop scene, and the fate of four friends in pursuit of the power and respect they call the Juice.

To mark the film’s 30th anniversary, Paramount Home Entertainment will release the film on 4K Ultra HD for the first time ever on January 11, 2022. The disc features access to a Digital copy of the film and legacy bonus content, including interviews with Dickerson, producer David Heyman (Harry Potter franchise), Epps, and fellow actors Khalil Kain and Jermaine Hopkins. The cast and crew look back on making the film, share heartfelt stories of working with Shakur, and reveal the influence that JUICE had on them both personally and professionally.

The in-depth featurettes are also loaded with footage of the cast on set and vintage interviews with Shakur, Queen Latifah, Cindy Herron of En Vogue, the Shocklee brothers, Eric B, EPMD, Cypress Hill and more. Along with commentary by the director, fans can enjoy the original ending and hear Dickerson detail the reasons that it was changed prior to the film’s theatrical debut.

JUICE was originally released on January 17, 1992. The previously released bonus content is detailed below:

Q, Raheem, Bishop, and Steel spend their days hanging out and looking for a way to get the power and respect they call Juice. Q hopes to earn respect by becoming a scratch 'n' mix DJ. Bishop has a deadlier plan—take it through an armed robbery with his crew. Ernest R. Dickerson, the acclaimed cinematographer whose collaborations with Spike Lee include Do the Right Thing and Malcom X, made his directorial debut with this powerful drama steeped in ‘90s urban lifestyle. JUICE features the acting debut of Tupac Shakur and a hit soundtrack that includes Eric B. & Rakim, Naughty by Nature, Big Daddy Kane and Salt N’ Pepa.

U.S. Rating: R for strong language and for some violence

Maybe I shouldn't give up on Paramount releasing the Friday The 13th movies on UHD.

TravisR said:
Maybe I shouldn't give up on Paramount releasing the Friday The 13th movies on UHD.
Click to expand...

By the way, there is a second 4K release of this title with one being a LE Steelbook.

Robert Crawford said:
By the way, there is a second 4K release of this title with one being a LE Steelbook.
Click to expand...

Thanks, Robert. I will add this to the preorder links above.
You must log in or register to reply here.