Submarine dramas always have the ingredients to make for crackerjack entertainment: those tight, enclosed spaces, the impossibility of leaving the vessel, the cramped quarters where tempers can flare and anything can happen. Todd Robinson’s Phantom follows in the tradition of other recent submarine dramas: it’s a tightly made, tightly wound film that wrings considerable suspense out of a premise that might have meant nuclear Armageddon forty-four years ago. 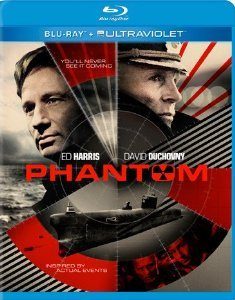 The experienced captain (Ed Harris) of Russian submarine vessels is given a peculiar mission commanding an older diesel rust bucket of a sub in 1969. Coming aboard at the last minute is a mysterious group of men led by a Russian agent Bruni (David Duchovny) with orders which are not to be opened until the sub is well away from port. Once out at sea, Bruni reveals his “secret weapon,” the phantom, a cloaking device that can make enemy ships misread the kind of vessel and its country of origin of the sub which holds it. With this apparatus, Bruni and his men reveal the true purpose of their mission: to launch a nuclear attack on the United States disguising the ship of origin as Chinese so that the United States and China will attack one another leaving Russia the ultimate victor when the smoke clears. Horrified by these revelations, the captain and his second-in-command (William Fichtner) must find some way of preventing this lunatic scheme from occurring.Writer-director Todd Robinson’s script is inspired by an incident involving a found Russian submarine a few hundred miles west of Pearl Harbor with all signs pointing to its being a rogue ship with a nuclear missile aboard which simply misfired. The scheme put forth in the film based on this real-life event is just nutty enough to have transpired, and Robinson squeezes out a goodly amount of tension in the cat and mouse game the captain and the rogue KGB agent go through as the ship’s control continually changes hands. With other boats around them in the sea also wary of the sub’s strange behaviors, there is plenty of conflict on board and lots of opportunities for torpedo launches and oceanic maneuvers to avoid being blown up. While the special effects work here can’t hold a candle to that in U-571, the movie’s budget was likely considerably lower than that exciting submarine thriller, and the effects here get the job done (the sound effects work is tremendous). Since none of Robinson’s actors are playing their parts with Russian accents, one must continually be reminded that these are Russians playing these dangerous war games (some of the dialogue also seems a bit anachronistic for 1969). The film falls apart a bit near the end with a lot of ill-advised gunplay, some confusion about who gets the upper hand, and an attempted lyrical ending which seems a bit cheesy. But some of the suspense sequences work like gangbusters and certainly hold the viewer’s attention.Ed Harris brings his patented brand of intensity to the role of Demi, and the character’s epilepsy allows director Robinson to insert some flashy memory blips when Demi is in spasm from his affliction. David Duchovny, however, underplays his maniacal KGB agent Bruni not bringing forth much passion for his mission and surrounded by fellow agents (Sean Patrick Flanery, Julian Adams) who are just as laid back as he is and thus not very compelling. William Fichtner has plenty of power bubbling under the surface of his calmer character, and Johnathon Schaech makes a positive impression as an officer who’s conflicted in his duty and his patriotism. Lance Henriksen, Jason Beghe, Jason Gray-Stanford, and Jordan Bridges offer entertaining performances in smaller roles.

Framed at its theatrical 2.35:1 aspect ratio, this transfer is presented in 1080p resolution using the AVC codec. Sharpness is outstanding throughout, and color is well under control with realistic if subdued flesh tones. Contrast might be slightly light and black levels are just okay and not especially striking. The film has been divided into 24 chapters.

Despite the low budget, the DTS-HD Master Audio 5.1 sound mix can stand with the best of them for thrilling split effects during all of the underwater sequences. With all of the explosions and the ship’s going to lethally-unsafe depths, the LFE channel gets plenty of opportunities for an intense workout, and the listener will not be disappointed. Dialogue has been expertly recorded and has been placed in the center channel.

Audio Commentary: writer-director Todd Robinson and star Ed Harris have an engaging conversation during the running of the film.Facing the Apocalypse (12:58, HD): producers Julian Adams, John Watson, and Pen Densham, writer-director Todd Robinson, and actors Ed Harris, David Duchovny, and Johnathon Schaech give brief interviews about the making of the movie. Cinematographer Byron Werner also comments on lighting and shooting within the confines of the actual Russian submarine used for the set.The Real Phantom (6:03, HD): technical advisor Kenneth Sewell tells the story of the real Russian rogue submarine who may have had a similar mission fictionalized in the film.Jeff Rona: Scoring Phantom (3:00, HD): the film’s composer describes his inspiration for the film’s score and the instruments used to get his effects.“An Ocean Away” Music Video (2:54, HD)Promo Trailers (HD): A Good Day to Die Hard, 12 Rounds 2.Ultraviolet Instructions

An entertaining apocalyptic submarine thriller, Phantom seems to have made much out of little. It’s an intriguing tale made on a slim budget but with a first rate performance from its star Ed Harris and some edge-of-your-seat moments that would make for a good rental.