Beginning in 1960 with The Andy Griffith Show, CBS began to have great success with a series of programs that would later come to be called "rural comedies." Charming, folksy, and family-oriented, these comedies scored high on the Nielsen charts and ran for years, several still popular when CBS finally decided to pull the plug on all of them and change its image with more sophisticated comedies and social satires. Among those shows in this amazing wave of bucolic wholesomeness was Petticoat Junction which ran seven seasons from 1963-1970. Though several cast changes occurred over its run (displayed prominently in this eight episode sampler selected from the show's first three seasons), the gentle comedy and love of family remained constant over the program's life, and it's a pleasure to relive the simple problems and pleasures of the show in this one disc highlights set. 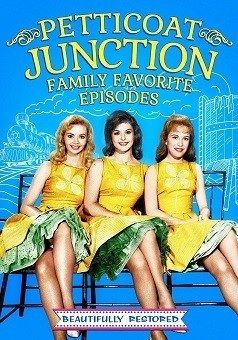 The series sets up the experiences of widow Kate Bradley (Bea Benadaret) who runs the Shady Rest Hotel, a small two-story edifice in the sleepy valley adjacent to Hooterville. The hotel has no phone nor a working elevator (though both are prominent fixtures in the lobby) and is only reachable via the Cannonball, an out-of-date steam line of the C & F.W. Railway Company, but there is plenty of home cooking and a bevy of beautiful daughters to welcome potential customers. There are the oldest, boy crazy Billie Jo (Jeannine Riley in six episodes, Gunilla Hutton in two), studious Bobbie Jo (Pat Woodell in six episodes, Lori Saunders in two), and tomboy Betty Jo (Linda Kaye, daughter of series producer Paul Henning). Also around is Uncle Joe Carson (Edgar Buchanan) whose get rich quick schemes, bottomless pit stomach, and easygoing approach to living (read: lazy) generate a considerable number of problems that Kate with her warm, loving ways always manages to solve.

The eight episodes from the show’s first three seasons that are gathered here on the single disc give a more than adequate feel for the tone of the series: the comedy is rather gentle rather than raucous, and the problems of the inhabitants of the Shady Rest and their occasional customers are never anything that can’t be resolved within the show’s twenty-six minute running time. Fans of the show remember quite fondly the running feud between the C. & F.W. Railroad’s vice-president Homer Bedloe (the redoubtable Charles Lane) and Kate Bradley. He’s determined to eliminate the antiquated steam locomotive and thus put the Shady Rest out of business, but Kate and her family always find some way to stop him. This wonderful rivalry is represented on this disc in the episode “The Umquaw Strip,” but an entire disc of their face-offs would have made for a grand good time. Among the other memorable episodes here are “The Curse of Chester W. Farnsworth” where Kate, Joe, and the girls find themselves with their own ghostly inhabitant, “Betty Jo's Dog” which introduces to the show the family pooch who would become an amusing nemesis for Uncle Joe for the rest of the series, and the funniest episode “The Ladybugs” in which the girls with another high school student try to become the female equivalent to The Beatles who were then sweeping the country as the hottest group on the music charts (the group even sings a Beatles hit “I Saw Her Standing There” with a change of pronoun). Other episodes like “Only Boy in the Class” (which shows the sexism of the time: a boy teased for taking home economics), “The Genghis Keane Story” as the Shady Resters take pity on a retired teacher who has lost motivation for living, and “Dear Minerva” (Kate becomes the advice columnist for the local paper) are more successful emotionally than comedically.

Star Bea Benadaret enjoyed top-billing for the first time in her career with this series, and she died during the run of the show going out on top. She’s grounded, has great timing and a wonderfully dry way of putting someone in his place if warranted. Edgar Buchanan seems to be having a ball as the indolent Uncle Joe, his cantankerous outer shell masking a warm, cuddly inside who is always welcome and one of the show’s best comic assets. The various actresses who play the daughters are beautiful (though mostly not believable as teens during the years covered on this disc) while able support is provided by Smiley Burdette and Rufe Davis as engineers on the locomotive and Frank Cady as storekeeper Sam Drucker. Among the guest stars present in these eight episodes are Dennis Hopper, Sheila James, Jesse White, Lurene Tuttle, Ken Osmond, Roy Roberts, Bernie Kopell, Benny Rubin, Hal Smith, Doodles Weaver, and Frank Ferguson, all guest star mainstays of 1950s and 1960s television.

Here are the eight episodes contained on this highlights DVD:

The program’s original 1.33:1 television aspect ratio is faithfully delivered in this transfer. Petticoat Junction’s first three seasons have been remastered and released on DVD previously, and these episodes reflect the cleaning and fixing that has been done with the programs. Sharpness is outstanding on all eight shows, and the grayscale on the first six displays rich black levels and an appealing picture. The show went to color beginning with its third season, so the final two shows on the disc from Season Three offer the rich, bright color look of those years with solid hues and lifelike flesh tones. There are occasional problems with moiré (the stripes on those railroad outfits don’t resolve well) and aliasing, and not all of the dust and dirt has been eliminated. Still, the episodes look very impressive for their age. Each one is divided into 4 chapters.

The Dolby Digital 2.0 sound mix is decoded by Dolby Prologic into the center channel. These mono sound mixes are very typical of the era with well recorded dialogue always easy to understand and never compromised by the occasional background music or sound effects. Age-related artifacts like hiss and crackle simply aren't there.

Fans of Petticoat Junction likely already have all three seasons which have been released on DVD, but for those who wonder what the show was all about, this sampler offers more than adequate examples of the program’s simple, wholesome humor.