CBS’s tightly wrapped crime and conspiracy drama continues to balance a deep and winding mythology with its self-contained stories. The Blu-ray release doesn’t deviate from the model set by the first season, meaning the episodes look and sound great, but there’s not a lot of extras to be had. 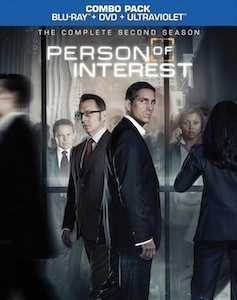 After previously crossing paths with Reese (Jim Caviezel), Finch (Michael Emerson), and Finch’s surveillance gathering, artificial intelligence system known as the Machine, the hacker / con artist Root (Amy Acker) games it so her assumed identity will be flagged as an “irrelevant” – people the Machine anticipates being either a perpetrator or victim of a crime, but not a threat to national security. Root’s objective is to gain access to the Machine itself; she claims in order to “set it free,” but her criminal activities and zealous veneration of Finch’s creation do little to assure anyone she can be trusted. Holding Finch hostage and leaving a trail of bodies as she tries to learn the Machine’s physical location, she manages to elude Reese for a time, but – with a little help from the A.I. – he’ll eventually catch up with her, though only in time to save his partner, not put a stop to Root’s plans.With the Reese-Finch partnership restored, it seems their work can pick up where it left off, but elements from their respective pasts return to jeopardize their efforts, and ultimately the fate of the A.I. Reese in particular will be bear the brunt of those forces as the FBI is still looking for the “man in the suit,” while individuals with more nefarious motives will converge on him as the more visible connection to the Machine. This in turn puts Detective Carter (Taraji P. Henson) in a vulnerable position as she must find a way to misdirect the FBI while keeping her working relationship with Reese a secret. Her partner Fusco (Kevin Chapman) also continues to supply information to their mutual friends, though most of his efforts are focused on his ties to HR, the corrupt law enforcement organization that’s steadily expanding its reach in the city. Root’s return to complete her liberation of the Machine is also inevitable, though as others with designs on the system circle in, her ambitions may actually prove to be the least worrisome, ultimately giving Reese and Finch a rather unexpected ally.The high quality storytelling continues unabated for Person of Interest’s second season, as episodes finely balance the show’s complex backstory with tensely drawn and executed cases of the week. But hands down it’s the former – specifically the origin stories for Reese, Finch and the Machine – that prove the most fascinating as they further develop and reveal their characters – products of hope, betrayal, and redemption.The introduction of Root in the last season also has a great payoff early in the run, thanks in large part to a stellar performance from Acker as Finch’s brilliant, but unstable, foil. But the writers also don’t waste our time, giving her a compelling origin story of her own, while also leaving enough unrevealed for future exploration.Over the two seasons, Reese has had his own feminine counterpart with the fixer character Zoe Morgan (Paige Turco), but that relationship has been played more for fun and romance (though there’s little doubt Zoe could handle herself in a tough spot). To reveal how the government has been using the Machine, and also to give Reese a spycraft partner, the writers introduced CIA operative Samantha Shaw (Sarah Shahi). Fans of the NBC series Life, in which Shahi played a bitter, no-nonsense police detective, shouldn’t be surprised by her convincing turn as the acerbic and deadly black ops agent, making her a welcome defector to the Person of Interest team.As the third season is set to debut on CBS next week, on a new night and time, it’s hard to say where the show will take us as it’s been so effectively unpredictable in the past, and the hard reset that took place in the second season’s final episode leaves the field even more wide open. The promotion of both Acker and Shahi to series regulars points to more of the ongoing struggle to control the Machine, though it begs the question of where that leaves the supporting players in the NYPD, as so far the struggle with HR has occupied a largely parallel track.Person of Interest: The Complete Second Season includes the 22 episodes that originally aired on CBS in 2012 and 2013. The episodes are spread across four Blu-ray discs in the following arrangement:Person of Interest’s third season premieres on Tuesday, September 24th at 10/9c on CBS.

The series episodes are correctly framed at 1.78:1 and presented in 1080p with the AVC codec. Though there are as many as six episodes on each disc, there shouldn’t be concerns about over-compression due to the release’s lack of supplements. The visuals bear this out, as the transfer exhibits inky black levels, strong contrast, and deep color; however, because of the cinematography and color grading, shadow areas can often look a bit crushed. Fine object detail in fabrics, and skin textures in particular, are excellent, though scenes in higher contrast environments reveal some slight edge haloing. Grain structure is often visible, as is a touch of noise at times, though the sometimes grittier flavor lends itself well to the content.

As with the first season release, the collection of on-disc bonus material is meager, although the items themselves are interesting. The inclusion of the entire six-disc DVD edition and digital copy fill out an otherwise trimmed down package.Season Finale Audio Commentary with Jonathan Nolan, Richard J. Lewis, and Greg PlagemanView from the Machine: 24 Hours Behind Person of Interest (21:24, HD): Behind the scenes of producing the final two episodes of the season, with narration by Kevin Chapman.Gag Reel (3:20, HD)DVD Edition: The episodes presented in standard definition are spread across six dual-layer DVDs.UltraViolet Digital Copy: Redeem by September 3, 2015.

Warner Home Video delivers a great high definition presentation for CBS’s Person of Interest: The Complete Second Season. The collection of bonus material is limited to just a few items, but the inclusion of standard definition and streaming options gives the title some versatility.

I love this show, but I have to say I am not a fan of Amy Acker or her character. Just kill her off already and let's move on.

I doubt you're going to get your wish, as she's slated as a series regular. General reaction to both Root and Acker have been positive, so I doubt they'll kill her off too soon. Possibly at the end of the season, but probably not any sooner.

Root is one of the best anti-heroes on TV.I think it will be found that the machine and Root have similar goals. Somebody always has to tidy up the dirty work.
You must log in or register to reply here.