Because the ratings continued to be so high for their series of Perry Mason TV-movies, NBC commissioned three films each to be made during the calendar years of 1990 and 1991. Thus Raymond Burr, Barbara Hale, and William R. Moses were kept professionally occupied churning out these ninety-minute tele-films which, even if they seem a bit padded today compared to the compact and gripping TV episodes from the 1950s and 1960s, still manage to keep viewers transfixed by the continuing adventures of their favorite criminal defense attorney. The third volume of Perry Mason adventures contains some of the best in the entire series. 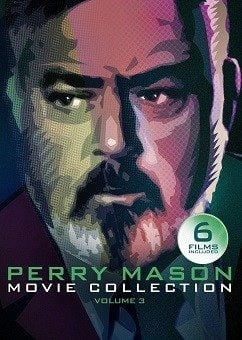 three Amaray cases in a slipcase

The Case of the Poisoned Pen is one of the easier mysteries to solve in this third volume of six cases, but it's unique in that both Della Street (Barbara Hale) and Ken Malansky (William R. Moses) find themselves among nine suspects in the poisoning murder of celebrated mystery writer Bradley Thompson (David Warner). It turns out, Mr. Thompson was not a nice man at all nor much of a writer either as the investigation turns up a series of betrayals, misrepresentations, and other chicanery that point the finger at several key suspects but with positive proof found with one who is subsequently arrested and defended by Perry (Raymond Burr). The Case of the Desperate Deception brings Perry and Ken to Paris representing a Marine serving in the American Embassy who's being court martialed for the murder of a former Nazi SS officer he had tracked down. With Della absent from the City of Light (apart from a couple of phone conversations), Perry's translator and Man Friday is Curt Mitchell (Terry O'Quinn). Even without Della, this is the strongest of the mysteries in the set. There are subterfuges and masquerades as quite a few people involved in the case aren't who they say they are, and Perry must sort all of the misdirection out before his client is sentenced to death. As is too often the case with these TV-films, there are a couple of formulaic chases through crowded streets, and as usual there's a love interest for Ken, this time a fashion clerk named Marie (Marcy Walker) who actually holds the key to solving the puzzle.Perry's back in Denver for The Case of the Silenced Singer. This is a music-heavy outing with actress/pop star Vanessa Williams playing a superstar singer murdered in her own apartment with her husband (Tim Reid) arrested for the crime. We actually see the face of the murderer early-on, so the real question becomes who in the singer's entourage hired the hit man? The answer is something of a great surprise in a story that finds Ken Malansky taking more of a beating than usual in the episode (hit over the head, beaten to a pulp in a fight and tossed over a balcony railing, involved in a car accident) but finding solace in the arms of yet another lovely woman (Nia Peeples). Frequent flashbacks in the film allow Vanessa Williams and others to perform making this one of the more unique outings in the series. Perry's then off to Las Vegas with Ken for a heavyweight championship fight in The Case of the Defiant Daughter, but he doesn't get to see even one punch thrown when he's drawn into the murder of a public relations man (Robert Culp) who'd been blackmailing four prominent public figures. The man arrested for the crime had come to Vegas seeking revenge for his brother's being driven to suicide by the dirt the blackmailer had on him, and his daughter Melanie (Jenny Lewis) is the one who begs Mason for his help for her father. The information leading to the solution of the crime comes very late in the film and is not revealed to the viewer until it's presented during the trial meaning that it's impossible to identify the culprit prior to Mason's unveiling. Still, it's a good if somewhat frustrating entry in the series (Melanie's insistence on playing Nancy Drew wears out its welcome quickly).Perry and company return to Denver for their final two cases in this set. In The Case of the Ruthless Reporter, the murder of a blackmailing albeit charismatic news anchor (John James) casts the entire production staff at his television station as potential suspects in his murder, and the famed attorney must do some heavy, serious interviewing to get his co-anchor client (Kerrie Keane) off the hook. As expected, Ken must take part in another couple of foot chases of witnesses unwilling to talk to Mason, and he also finds time to fall for one of the pretty suspects, news reporter Cassie Woodfield (Mary Page Keller). In the final case in this set, The Case of the Maligned Mobster, former gangster Johnny Sorrento (Michael Nader) is arrested for the murder of his wife who was leaving him and filing for divorce. Ken wants the office to have nothing to do with the shady Sorrento, but with the urging of Johnny's corporate lawyer (Mason Adams), Perry agrees to take the case throwing him headlong into a world of mobsters and molls and at one point even getting shot. It's a mystery that plays perfectly fair with the audience laying out the clues and allowing them to easily uncover the guilty party before Perry does it in court, and it brings this box set to a satisfying close.As always, the cases are awash with famous faces. In addition to the actors named in the above summaries, one can also glimpse in these episodes Cindy Williams, Barbara Babcock, Kiel Martin, Teresa Wright, Ian Bannen, Yvette Mimeux, Ian McShane, Rex Smith, Angela Bassett, Jere Burns, Ken Kercheval, Kevin Tighe, Robert Vaughn, Don Galloway, Jerry Orbach, Susan Sullivan, Philip Michael Thomas, Beverly Leech, Howard McGillin, and Paul Anka.

The films are presented in their broadcast aspect ratio of 1.33:1. In the main, these six films look the best of all four volumes of TV-movies yet released. Sharpness is good to excellent and color is solid throughout with natural flesh tones. Sure, there are occasional dust specks, and the lack of anamorphic enhancement means that moiré and aliasing are going to be present along with some combing anomalies in heavy plaid jackets and subtle striped shirts. Still, these present the most consistent video quality of all the box sets of these films yet produced. Each film has been divided into 9 chapters.

The Dolby Digital 2.0 stereo sound mix features well-recorded dialogue tracks while the music gets a wonderful spread through the soundstage while again never overpowering the all-important dialogue with the films. Sound effects like gunshots, wrecks, and flat tires have sufficient weight to make them believable within the confines of the movies, and there is decent spread of sound effects through the front soundstage.

There are no bonus features at all with this release.A note on packaging: two films are each assigned one DVD, but each double feature disc is contained in its own Amaray case taking up much more room than if the set had been done in a single case with leaves or in slimline cases. Four volumes into this set of releases, they do have a consistency in look, but they eat up a tremendous amount of shelf space.

The best and most consistent set of mysteries in the Perry Mason Movie Collection series, the films in Volume 3 are all nicely presented and offer some baffling mysteries with a fair share of surprises for the viewer. Recommended!

An excellent review as usual; thank you for your efforts.

I received a press release from CBS/Paramount this week informing me that the three DVDs contained in this set are going to be released individually on November 4 retailing for $16.99. With Amazon's typical discount of a couple of dollars, you can get these three discs more economically by buying them separately than in this set.
You must log in or register to reply here.