After bringing back the beloved character of Perry Mason for a series of made-for-TV films in 1985, Raymond Burr and Barbara Hale, Perry Mason and Della Street from the original CBS series, continued with the very popular if not universally acclaimed movies in another sequence of six tele-movies in this newest volume produced from 1987-1989. CBS/Paramount first released these next six features in May in a three-disc, six-movie package, and now these same films are being offered in separate releases for $16.99 each on September 9. They are the same discs as released before without the slipcase to hold all three full-sized DVD cases, but the price is actually better if one buys them separately. 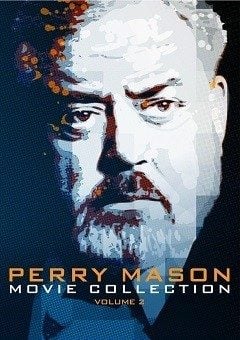 The films are presented in their broadcast aspect ratio of 1.33:1. Image quality improves as one goes deeper into the box set. The first two films seem to be somewhat softer in appearance and feature some occasional smeared color in certain scenes. The second episode also has a couple of videotape anomalies that interrupt the stability of the image. Later episodes, especially the final four, display very clean transfers and good to very good color renditions with accurate flesh tones. Sharpness comes and goes within the episodes possibly due to soft focus photography on some of the older players and on some of the ladies, but that’s not always the case. Black levels are only average to slightly above in all but the last case which features excellent black levels. Because there is no anamorphic enhancement, there are moiré patterns and aliasing to be seen on a fairly regular basis. Each episode has been divided into 9 chapters.

The Dolby Digital 2.0 stereo sound mix features well-recorded dialogue tracks while the music gets a wonderful spread through the soundstage while again never overpowering the all-important dialogue with the films. Sound effects like gunshots, wrecks, and flat tires have sufficient weight to make them believable within the confines of the movies.

There are no bonus features at all with this release.A note on packaging: two films are each assigned one DVD, but each double feature disc is contained in its own Amaray case taking up much more room than if the set had been done in a single case with leaves or in slimline cases. Buyers of future releases might be better served with more space-saving ideas when packaging these movies for the consumer.

For those fans of Perry Mason who not only want the complete series of television episodes as well as all of the TV-movie presentations, these six additional TV films contained in Volume 2 of the Perry Mason Movie Collection get us to 1989 in the history of their production.

Terrific review of the set. I'm so glad to add the television movies to my Perry Mason collection.

Darby
You must log in or register to reply here.