The stereotypes fly fast and furiously in James Burrows’ Partners, an unfunny and unexciting fish-out-of-water comedy-drama produced during the same year that groundbreaking gay-themed movies like Victor/Victoria and Making Love painted reasonable and appealing portraits of the world featuring the gay community in prominent portions of the storytelling. Here, the storytelling and characterizations are a mess, and the gay portrayals are absurdly farcical (though the movie, unlike Victor/Victoria, isn’t a farce) and embarrassingly naïve in comparison to its same-year siblings. 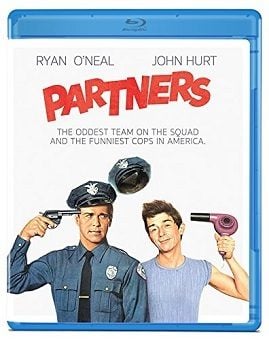 After catching some flak for the lack of a serious investigation into the murder of a gay male model, Chief Wilkins (Kenneth McMillan) decides to send two officers undercover masquerading as a gay couple to see if they can solve the case. Chosen are the macho, aggressively heterosexual Benson (Ryan O’Neal) and the deeply closeted, mild mannered Kerwin (John Hurt), a most ill-matched team since Benson resents any reference to himself as gay and Kerwin is so closeted that he knows nothing about the gay world and won’t even dance with a man at a private party. Eventually, the two form a working bond where Kerwin takes on the household chores while snooping around the apartment complex where the murdered man lived while Benson visits the murdered man’s haunts (gyms, clubs) and, after a second gay male model is killed, eventually decides to pose as a male model for a gay magazine himself thrusting him into the clutches of a lusty photographer (Robyn Douglass) who loves nothing more than the challenge of coming between gay couples by coming on to the most macho of the pair.

Written by Francis Veber who shoved gay stereotypes into great notoriety and considerable financial success in the original French La Cage aux Folles, Partners has a script that obnoxiously ill uses gay stereotypes for their puny comic effects: in addition to an overuse of typical detrimental slang for gay men (fruits, faggots, queens, ladies, perverts), Kerwin doesn’t own a single article of clothing that isn’t pink, puce, or periwinkle (even the car selected for the couple by the police department is lavender) and he’s much more interested in becoming the perfect housewife for Benson by keeping their apartment clean, preparing gourmet meals, and serving him breakfast in bed rather than doing actual police work, while all of Benson’s clothes are ultra-tight or ultra-short and oftentimes inappropriate for the situations in which he finds himself, and later in the film, when gay panic finally seizes hold of him after he gives his partner an affectionate peck on the cheek for making such a happy home, throws the case out the window and antagonistically asserts his heterosexual credentials by bedding the photographer. Most of the comedy relief lazily resorts to placing Ryan O’Neal’s Benson into situations where he’ll be subjected to the most embarrassment imaginable (the comedy of discomfort gets old very fast), though Veber and director James Burrows do score one memorable moment when Benson and a suspect are arrested for public indecency at a beach, hauled into the police station, and harassed unmercifully (called “faggot” repeatedly, not allowed their clothes, and made to parade in front of whistling, insulting prisoners) allowing the macho cop to see the world through someone else’s eyes for a change and understand the injustice and lack of civility that minorities often face. Multiple Emmy-winner James Burrows has the reputation as a great comedy director, but this was more than a decade before he helmed all seven seasons of Will & Grace (along with many episodes of Cheers, Frasier, Friends, and other shows) and many of the comic nuances he applied for television are certainly missing here in his first feature film. As for the mystery of the murdered models, the storytelling gets so muddled and meandering by the end that the identities of the killers actually end up not counting for much.

Both Ryan O’Neal and John Hurt are playing badly written characters, but they obviously do the best they can with such tired, obvious material. Neither, however, emerges from the film with any plaudits on his resume. Kenneth McMillan’s sniggering police captain is rather off-putting while Robyn Douglass scores probably the most authentic performance as the shady photographer with multiple motives for her behaviors. Darrell Larson also does well as a neighbor who has much to tell the boys that aides their investigation. Popping in for noticeable cameos are Jay Robinson as a landlord, Rick Jason as an interested bystander, Denise Galik as Benson’s girl friend, and Steven Reisch as the counter boy subjected to the humiliation of the police station.

The film has been framed for this Blu-ray release at 1.78:1 and is presented in 1080p resolution using the AVC codec. Despite a few shots that appear soft and dated, much of the film has a bright, television-style look with good to very good sharpness and true color with accurate skin tones. Contrast occasionally goes milky, and black levels are fairly mediocre, but the main problem with the transfer is the constant spray of dust specks which litter the image. There are a couple of moments of jitter as well. The movie has been divided into 8 chapters.

The DTS-HD Master Audio 2.0 mono sound mix offers era-precise sound quality with the well-recorded dialogue, pop tunes of the era and Georges Delerue’s background score, and the occasional sound effect sharing the track most harmoniously. Age-related artifacts like hiss or crackle are not much of a problem.

There are no bonus features on this Blu-ray release.

As a pre-AIDS gay-themed dramedy, Partners is disappointingly lacking in finesse, class, and sophistication. While the leading actors are giving their all, it’s mostly in vain for an obvious, weakly written crime comedy that lets down both the gay and straight communities not only of their own era but also now as well.

I hope when the studios analyze the sales statistics of this release, they don't determine the gay movies just don't sell!

Bad gay movies do not sell.

I wonder if Ryan O'Neal regrets making this now that Tatum's a lesbian. Speaking of which, where's Little Darlings? If they can release this reactionary travesty, there's room for that on Blu-ray.


And frankly, I am of the opinion that some of the non-Cheers-connected shows James Burrows did were massively overrated and just plain bad.

Always have been curious about this movie even though I've always heard it is just an awful movie. it has been priced cheaply on Amazon at least. possible purchase after he new year. need to prioritize for the holidays so purchases like these must be delayed until the new year.

Powell&Pressburger said:
Always have been curious about this movie even though I've always heard it is just an awful movie. it has been priced cheaply on Amazon at least. possible purchase after he new year. need to prioritize for the holidays so purchases like these must be delayed until the new year.
Click to expand...

This movie is barely worth spending 1g of data on to stream it.

I'd rather watch The Ritz- now where is that one?!

noel aguirre said:
I'd rather watch The Ritz- now where is that one?!
Click to expand...

Noel, Warner Archive released it on dvd a few years ago.

JoelA said:
Noel, Warner Archive released it on dvd a few years ago.
Click to expand...

Thanks Joel- Have you seen the DVD- is it worth getting?

Noel, yes, I own it and if you enjoy the film it's worth getting on dvd. I don't see this one coming to blu soon. Nice transfer in OAR.

JoelA said:
Noel, yes, I own it and if you enjoy the film it's worth getting on dvd. I don't see this one coming to blu soon. Nice transfer in OAR.
Click to expand...

Ordered it- can't wait! Haven't seen it since it came out.
Ordered it plus Rosemarie 1954. Saw parts of it in a CW bar and it looks interesting. Thanks again.

noel aguirre said:
Ordered it- can't wait! Haven't seen it since it came out.
Ordered it plus Rosemarie 1954. Saw parts of it in a CW bar and it looks interesting. Thanks again.

Glad to hear that. OAR is Original Aspect Ratio.

I have Rose Marie, also. Enjoy the film, but the print is a little rough in spots.