Director Guillermo del Toro(Pan’s Labyrinth, Hellboy) grew up relishing Japanese mecha and monster movies, and Pacific Rim is his spectacular tribute to the genres. Pacific Rim was released to theaters in July of 2013 to generally good reviews but disappointing box office in North America. The subject matter of Pacific Rim may have made it a hard sell in North America, and the marketing made the film resemble another After Earth more than another Avatar. In Asia, however, Pacific Rim enjoyed very high box office receipts, and its worldwide box office makes it likely that sequels will follow. 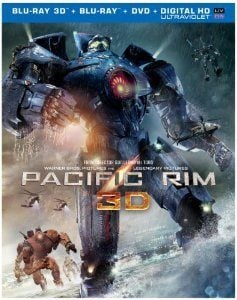 The major cities of the world find themselves under attack by Kaiju, strange creatures originating from the depths of the oceans. The only effective countermeasure for Kaiju are Jaegers, giant mechanized robots so complicated that they required 2 persons operating them simultaneously in teams in an neural link. The Jaeger pilots must be compatible mentally, and a single pilot alone is ineffective to power a Jaeger.Raleigh Becket(Charlie Hunnam) is a former Jaeger pilot who finds himself reluctantly called back into service by Stacker Pentecost(Idris Elba), the military commander trying to end the attacks by the Kaiju. Raleigh is most compatible as a copilot with Mako(Rinko Kikuchi), a female pilot who, like Raleigh, has her own personal history of losses against the Kaiju. They are assisted in their fight by Dr. Newton Geiszler(Charlie Day), an expert on the Kaiju who is forced to seek assistance from a black marketeer in Kaiju organs, Hannibal Chau(Ron Perlman), a self-made man (and comic relief) who boasts that he even created his own name from the name of his favorite historical figure and his second favorite Szechuan restaurant in Brooklyn.I was pleasantly surprised by the entertainment value in Pacific Rim. There are so many eye-candy blockbusters released without any emotional heart that I suspected Pacific Rim to be yet another soul-less special effects extravaganza. I am happy to be proven wrong, and I should have known better, since director Guillermo del Toro has a proven track record of creating films with emotional resonance like Pan's Labyrinth and even Hellboy.Pacific Rim excels in creating a sense of scale for the audience, not only in the way that specific camera shots are composed to demonstrate the gigantic size of the Kaiju and Jaegers in relation to ordinary objects, but also in the way that the human players have suffered catastrophic losses in this war but find their strength to carry the battle to the enemy. Viewers are encouraged to stay through the inital ending credits for a satisfying payoff to an element introduced into the middle of the film.

Our resident HTF 3-D Addict, Ron Epstein, may have beat me to the punch with his review, but I agree wholeheartedly with his rating of the video presentation. Pacific Rim was created almost entirely in the digital realm, and it is hard to believe that this film was a postconversion to 3-D, given the fantastic results. The illusions of depth in the stereo window in Pacific Rim surpass many films that were filmed natively in 3-D. Other than a couple of brief instances of ghosting, this 3-D presentation is perfection. Colors are vibrant and blacks are solid.

The English 7.1 DTS-HD Master Audio provides the roar of immersion that delivers a wall of sound for the eye candy presented by the video. Ambient sound is present throughout, with the front and rear speakers seeming to get an equal workout and the subwoofer deployed to maximum effect.

Special features are provided in 1080p on a separate disc(other than the director's commentary included on the 2D Blu-ray), and include all of the following:Director's Commentary: Guillermo del Toro really loves making films, and his interviews and commentaries always show it.The Director's Notebook: This feature is navigated with the arrows on your remote control and consists of text, illustrations, and videos embedded on a visual representation of del Toro's notebook as you make selections and turn the pages in this virtual notebook.Drift Space: Concept illustrations from creation of the film.The Digital Artistry of Pacific Rim(17:10): Featurette with del Toro and others describing creation of the film.The Shatterdome: More featurettes re: making the film.Deleted Scenes(3:47): Deleted scenes may be selected individually or with a "Play All" selection.Blooper Reel(3:52).

Pacific Rim is a child's fantasy of mech robots fighting monsters come to life. If you can suspend your disbelief that the Jaeger pilots are not torn apart by the G-forces pulled by their mechs, then you are ready to have fun with this action film. The 3-D presentation is excellent, and the audio delivers as well. The special features are interesting and informative, especially the Director's Notebook, at least for this reviewer since I am sometimes left bored by similar features for other films. Anyone who appreciates del Toro's quieter films will still find something to enjoy here, and Pacific Rim comes highly recommended.

Your overall rating doesn't make sense to me based on your highly recommendation?

Robert Crawford said:
Your overall rating doesn't make sense to me based on your highly recommendation?
Click to expand...

Thanks for pointing that out, Crawdaddy. The initial overall rating is the default number from the template, and has been corrected to accurately reflect the recommendation.

Now, that's better! Thanks for the review as I plan on getting this BD some time this year. I did view the film in an IMAX theater and loved it.

Mine is waiting for me when I get back to MD, thanks for confirming it is worth looking forward to Tim!

I have a Best Buy gift certificate burning a hole in my pocket. Can't wait to check it out on my display.

I just saw the disc this evening, having missed it in the theatrical run. I really enjoyed the movie!One thing I'm a little surprised by. I've seen so far only a few 3D movies in my home theater set-up. Star Trek, Promethius, Dial M for Murder and Pacific Rim. Of all those, this one worked for me. I saw Star Trek in the theaters and the 3D effect worked there, but at home, it's very subtle. Promethius required I sit closer. Pacific Rim worked from a further distance.

We watched this last night and I agree with the Video and 3D ratings. The 3D was better and stronger than I was expecting---it was exceptional.

Point of information: the 3D 4-disc package also has about an hour of supplements on the 2-D version of the feature. And my version had the 4 discs stacked two-by-two, kind of on top of each other, which worries me from the point of view of potential scratching. Loved the film, and was sorry to hear it didn't do that well domestically.

I still can't believe it was such a bomb in Japan, being that it was an homage to the giant monster movies that used to be a staple for Japanese filmmakers. I guess the Japan audience has moved on.

Although it's pretty much made for 11 year old boys, the film is a lot of fun. I would rather it wasn't raining throughout most of the film (same weather plagued the American version of GODZILLA); but the Blu-ray is pretty much perfect, with superb 3D and excellent sound.