Stuart Cooper’s Overlord is one of those conceptual pieces which works in fits and starts but isn’t quite fleshed out enough to have the impact it might have had with a more developed story and more in-depth characterizations. By utilizing astonishing vintage World War II footage from the Imperial War Museum, director Cooper gives his film its primary reason for existence but makes us ache that its touching central character and those who circle his orbit aren’t given the profundity they might have to extend the film’s themes and impact more powerfully. 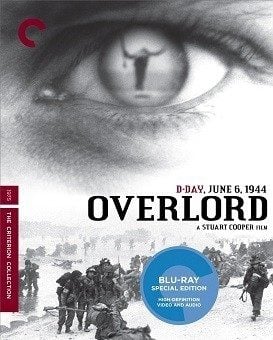 Englishman Thomas Beddows (Brian Stirner) is conscripted into the British marines late in World War II. The story of his basic training on the way to the invasion at Normandy makes up the brief running time of the film. It’s a slight story of a rather unimportant solider engaged in a war he actually wasn’t too keen to join. At one point, he says that he feels as though he and his fellow soldiers are part of a big machine that gets bigger and bigger while they get smaller and smaller until there’s nothing left of them. Never has a film’s theme been more succinctly stated by its main character than in that moment late in this film.To drive home his point even more strongly, director Cooper has inserted into the movie archival war footage from a variety of sources (mostly the Imperial War Museum) juxtaposed with sequences featuring his actors playing fictional characters involved in training for the D-Day invasion. Their scenes are brief in comparison to the included footage, but Cooper’s idea, while novel, isn’t quite as well realized as he may have wished. The old footage is astounding to watch, but the story of Private Beddows isn’t fleshed out enough to hold its own amid the splendor of the actual war photography. There is the occasional clever juxtaposition of the sounds of war (bombs going off, planes zooming past) with the everyday sounds of domestic English life (the railway carriages trundling along, the wind whistling through the trees) that gives the movie an odd kind of chic, but it's a motif that's not consistently used throughout the picture.The film’s greatest achievement is not in the simplistic storytelling but in the astonishing series of images from the war, some so hypnotic that you’ll want an instant replay. This footage will keep your eyes positively glued to the screen. Would that the narrative was as mesmerizing. Director Cooper and his Oscar-winning cinematographer John Alcott have attempted to match the fictional footage to the look and tone of the archival material. Though this endeavor is occasionally achieved, it’s not consistent throughout the picture.There are numerous pleasures to be found with Overlord, however. Paul Glass’s haunting score complements the melancholy story to perfection. Director Cooper spots a couple of period tunes like “The Lambeth Walk” and “We Don’t Know Where We’re Going” while showing either old or new footage in montage, both very effective moments (the “Lambeth Walk” sequence is directly from the archives). The actors give touching performances with their extremely limited material, but one truly wishes to see what they could have done with something more dramatically substantial. Late in the film when Beddows writes a poignant letter home with a new fountain pen he’s just received as a birthday present, we sense the depths of emotion that could have been available to actor Brian Stirner had the script been more fully dramatized (and what happens to the letter and to Beddows, of course, reaches levels of irony that could have been much more profound with a more developed screenplay).Still, the film makes its points and on a small scale, it’s effective. The sum just happens to be less than its parts, unfortunately.

The black and white film is presented with an aspect ratio of 1.66:1 in 1080p resolution using the AVC codec. Judging a film such as this which is part new footage shot in 1975 and the rest archival footage in many different states of condition is problematic. Some of the war footage is in rough, overly grainy shape with dirt and scratches and tears as one would expect. Some of it, on the other hand, looks unbelievably terrific with excellent grayscale and good black levels that will definitely impress. Even the 1975 footage, though, has occasional scratches and moments where contrast is weak, black levels are only average, and a soft image is present. Other moments have startling clarity and sharpness as though the film were shot yesterday. Whether that look is by design or due to deterioration is difficult to ascertain. The film is divided into 13 chapters.

The PCM 1.0 (1.1 Mbps) track is mostly clear and clean. There is occasional hiss but nothing that dominates the presentation. Volume levels are set perfectly so that the film sounds about what one would expect a low budget movie of the mid-1970s to sound like. One impressive feature to note is that almost all of the archival footage was provided with its own Foley soundtrack at the time of the making of this film. The museum’s footage used in the picture is actually silent. Probably the most takeaway aspect of the production is Paul Glass’s hauntingly poignant background score which matches the film’s mood to perfection.

Audio Commentary: comments have been spliced together featuring individual reflections by director Stuart Cooper and star Brian Stirner. Both men are well spoken about their participation on the project, and Cooper especially offers exceptional background information on how the project was conceived, shot, edited, and presented to the public.Mining the Archive (23:25, HD): Anne Fleming and Roger Smither, directors of the Imperial War Museum, discuss the use of their archival footage in Overlord. Both speak in depth about specific scenes used in the film and how the film was able to be made on a miniscule budget because use of the footage was granted free of charge.Soldier Journals: Introduced by director Stuart Cooper (2:24), star Brian Stirner reads diary excerpts from two sergeants who participated in the D-Day landings making it clear that director/co-screenwriter Cooper got quite a few ideas for his fictional character and the events that happen to him from these real-life situations faced by these two soldiers. Edward McCosh (8:44) and Findlay Campbell (12:04) are the two soldiers in question.Capa Influences Cooper (8:01, HD): photographer Robert Capa’s still pictures of the D-Day landings had a profound effect on director Stuart Cooper’s visual style for Overlord, and this featurette shows how.Germany Calling (2:06, HD): the propaganda film that used “The Lambeth Walk” to underscore manipulated stock footage of Hitler and his troops is presented in its entirety on the disc. It’s hilarious to see the entire thing since only moments of it were used in the actual film.Cameramen at War (14:44, HD): a tribute to the men who risked their lives filming actual battle footage now contained in the Imperial War Museum’s archives. These men, some of whom also photographed the horrors of World War I as well, are given a well deserved salute in this much appreciated featurette.A Test of Violence (14:17, HD): director Cooper’s short film A Test of Violence presents Spanish painter Juan Genoves’s works presented in counterpoint to live action footage shot to match the style of the artist’s work. It was this fascinating melding of two styles that gave producer James Quinn the idea that Stuart Cooper could handle a feature length film using a similar technique.Theatrical Trailer (2:52, HD)Twenty-Nine Page Booklet: contains stills, an essay by film scholar and editor Kent Jones on Overlord’s place among the famous antiwar films, a well written piece by Roger Smither on the Imperial War Museum, and a very lovely excerpt from screenwriters Stuart Cooper and Christopher Hudson’s novelization of their script which makes one want to seek out the book.Timeline: can be pulled up from the menu or by pushing the red button on the remote. It shows you your progress on the disc, the title of the chapter you’re now in, and index markers for the commentary that goes along with the film, all of which can be switched on the fly. Additionally, two other buttons on the remote can place or remove bookmarks if you decide to stop viewing before reaching the end of the film or want to mark specific places for later reference.

Overlord doesn’t yet have much of a reputation in the United States since it failed to be released here in 1975. Only in the last half dozen years has it begun to be discovered in various film festivals around the country. This Blu-ray provides a very good representation of this very unique movie.