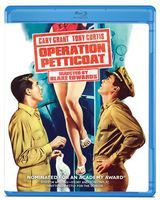 Lt. Commander Matt Sherman(Cary Grant) has his work cut out for him after his submarine, the Sea Tiger, is sunk at port in the Philippines after bombing by Japanese Zeros following Pearl Harbor. Sherman is able to salvage his command with the assistance of a Bilko-like officer played by Tony Curtis, who succeeds in obtaining supplies to make the Sea Tiger capable(barely) of making the journey back to Hawaii. Further complications ensue when Curtis' Lt. Holden insists on picking up some American nurses stranded effectively behind enemy lines. Joan O'Brien(The Alamo) plays Grant's love interest, Nurse Crandell, in a role offered originally to Tina Louise(Day of the Outlaw, Gilligan's Island). Arthur O'Connell(The Great Race) plays Chief Machinist's Mate Tostin with Dick Sargent(Bewitched) and Gavin MacLeod(The Love Boat) having prominent roles as sailors on board the Sea Tiger. Fans of Happy Days may or many not recognize Mrs. Cunningham(Marion Ross) in her role as Lt. Colfax, RN.Cary Grant and Tony Curtis have great comedic chops between them, and they play off each other well with Grant effectively playing the straight man, except whenever he pulls rank on his lieutenant, which is just often enough to enhance the humor as Curtis is forced to suffer the wrath of his superior officer for his routine disobedience of regulations. Good comedy often builds gradually from almost nothing to a crescendo, and such is the case in Operation Petticoat, which seems to be almost a straight war film during its first few minutes until amusing situations begin to arise one after the other, each slightly more ridiculous than the last. Operation Petticoat is not the funniest movie ever made by a long shot, but it does have some very funny scenes. Screenwriters Stanley Shapiro and Maurice Richlin were straight off their collaboration on Pillow Talk when this film was produced. Richlin and Edwards applied some of these same lessons in building comedy to a fever pitch in their subsequent collaboration in writing the screenplay for The Pink Panther(1963). Other than the pink motif in both films, Operation Petticoat also shares some of the same comedic style as The Pink Panther, even if they are very different films.

Operation Petticoat appears on Blu-ray in a 1.85:1 aspect ration in the AVC codec on a single layer disc. Picture quality is variable with the most damage to the print apparent in footage close to the reel changes on the original film. Scratches and detritus appear periodically close to each "reel change" and disappear mostly during the body of each "reel." Operation Petticoat has never looked great in any prior iteration on home video, and there is no question that it has never looked better. Contrast and shadow detail are very good except in a few optical shots that never would have looked great originally. Color is excellent, which is noteworthy since Eastman Color is notorious for fading, and no such diminution is evident here. I doubt the colors ever looked better in original release prints. Over 90% of the film looks great with minimal dust and debris, and the worst 10% here is really not terrible, and not distracting from the film.

The mono DTS-HD track has no audible hiss, and actually has such rich fidelity that it could almost pass for stereo. This may not be reference quality, but it is basically flawless for what it is, a mono track with no fluctuations in volume and with dialogue always audible as intended for the audience.

This edition does not have any special features.

Operation Petticoat is finally and deservedly on Blu-ray. The film may not be everyone's masterpiece, but it is a very good film with an excellent cast of actors and enough talent behind the scenes to guarantee a solid time for any audience. I see some of the farce of The Pink Panther present in this film, and Blake Edwards developing his technique towards his future endeavors. The video presentation is very good in spite of the flaws in the source print which have not been digitally corrected for this edition. The audio presentation may not be exceptional, given its mono source, but it is basically flawless as a mono track. Operation Petticoat is recommended for fans of Cary Grant, Tony Curtis, Blake Edwards, and for any fans of comedy. This reviewer enjoys it for all of these reasons.

Have seen this on TCM and on my dvd and the picture looked kinda weak so this blu-ray will be a must buy for this funny film with great performances from Cary Grant and Tony Curtis.

I watched this last night and I have few complaints. It is not a perfect transfer, but as you say the colors are excellent and the occasional blemishes are easy to ignore unless you are focusing on them.

The film itself is very funny with a terrific cast.

Trivia note: Joan O'Brien, who plays the well-endowed Lt. Crandall, was once married to guitarist Billy Strange, who among other things wrote the music to "Limbo Rock." I never met Joan O'Brien, but I knew Billy Strange and attended his 75th birthday bash in Nashville in 2005. He died two years ago.

"Penny Serenade", "Indiscreet", "The Grass Is Greener", "That Touch Of Mink", "Father Goose", and now "Operation Petticoat" -these Cary Grant movies were ill-served on home video until Olive issued their splendid Blu-Rays. Well done, Olive!
You must log in or register to reply here.

Yesterday at 9:51 AM
Angelo Colombus