On the Riviera Blu-ray Review

Never let it be said that 20th Century Fox didn’t get the most out of its story properties. The basic plot behind Walter Lang’s 1951 On the Riviera had already been used in two previously successful films: 1934’s Folies Bergère and 1941’s That Night in Rio, but On the Riviera had the decided advantage of a tour de force performance from Danny Kaye plus words and music from his wife Sylvia Fine. While the plot was starting to grow some whiskers by this time, the film certainly makes the most of its musical sequences which remain its greatest claim to fame. 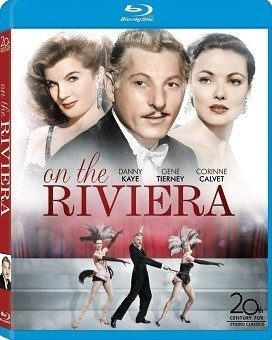 Noted entertainer/impersonator Jack Martin (Danny Kaye) is asked by friends of aviator entrepreneur Henri Duran (also Kaye) to masquerade as the notorious ladies man while Duran rushes to London to secure much needed funding for his plans for a fleet of planes deceiving rival Periton (Jean Murat) in the process. Martin’s jealous girl friend Colette (Corinne Calvet) isn’t thrilled with the arrangement because Duran’s wife Lilli (Gene Tierney) is famously beautiful, but when Lilli is tipped off about the deception, she decides to have a little fun making the impersonator sweat during the evening. But little does she know that Duran actually returns home early and spends part of the evening as Martin playing himself leading to a merry mix-up between all of the concerned parties.The reworked story by Valentine Davies and Phoebe and Henry Ephron offers innumerable opportunities for Danny Kaye to display his versatility with impressions (cleverly miming Maurice Chevalier who starred in the original film of this story) and in performing the original songs crafted for him by his wife who knew what he did best better than anybody and who contributes four songs to show off his skills. Sadly, though, no one else in the film is particularly well served by the script being relegated to the sidelines while Kaye holds center stage as one or the other character and taking the lead in all of the musical numbers. (Apart from the four Sylvia Fine songs, Kaye also does a quiet – for him – and very effective rendition of the old standard “Ballin’ the Jack” which finds him less manic and quite appealing.) The film’s most famous number is undoubtedly “Popo the Puppet” as Danny cavorts in loose-limbed fashion as the title character, but he’s just as effective in his Chevalier-mimed title song, the climactic “Happy Ending,” or the large-scale production number “Rhythm of a New Romance,” though this latter song goes on too long as Kaye’s lead searches through several world locales for a love interest. All of the numbers benefit from the stylized staging of Jack Cole whose lead dancer Gwen Verdon is front and center in almost all of the major numbers, and it’s easy to see why several years later producers of White Christmas would have no qualms about casting Kaye in a dancing role after seeing his fleet footwork in this film courtesy of the marvelous Jack Cole.Kaye takes a tip from Don Ameche in the 1941 version and makes his two roles very distinguishable from each other in their accents and mannerisms. It’s no surprise he won the Golden Globe for his musical comedy performance as he’s in every musical number and is playing the two separate roles very smoothly and with great flair. The two women who play opposite him – Gene Tierney as Lilli (look closely and you’ll see the Laura portrait of her several times in living room sequences) and Corinne Calvet as Colette – have little to do but look beautiful (Tierney’s succession of gowns were designed by her husband at the time Oleg Cassini) though Tierney’s suavity is much more appealing than Calvert’s tiresome petulance. Marcel Dalio and Henri Letondal have rather uninteresting roles as the friends of Duran who are covering for him, but old reliable Clinton Sundberg gets some choice moments as the Duran butler, and Sig Ruman fumes and fusses as the strict nightclub manager in his patented style.

The film is presented in its theatrical 1.33:1 aspect ratio and is offered in 1080p resolution using the AVC codec. Sharpness is all one could hope for throughout, but the color variations and brightness levels (several early scenes are too dark) vary giddily throughout the film. Reds and blues are very strong, but skin tones go from pink to brown in the same scene, and some scenes in lower light levels have a more digital look to them with brackish color that doesn’t mesh well with the scenes which surround them. But the image is sparkling clean with no hints of age-related dust, debris, or reel change markers present. The film has been divided into 20 chapters.

The DTS-HD Master Audio 1.0 sound mix is very much a product of its era. Dialogue has been recorded well and is never overpowered by the music or sound effects. Fidelity is more than acceptable, and volume levels have been nicely adjusted. There are no age-related artifacts like hiss or pops to spoil the aural presentation either.

The Riviera Story: A Remarkable Impersonation (10:40, SD): music historians Miles Kreuger and Scott McIsaac among others compare and contrast the three versions of the story Fox used in films from 1934 through 1951.A Portrait of Danny Kaye (26:37, SD): Danny Kaye’s daughter Dena along with other experts give a cursory look at his films and stage work while extolling the entertainer’s work with UNICEF and his accomplishments as a pilot, a conductor, and a chef.The Jack of Clubs: Choreographer Jack Cole (9:05, SD): dance and music historians Larry Billman and Miles Kreuger discuss the legendary stage and screen work of Jack Cole.Theatrical Trailer (2:35, SD)

On the Riviera certainly isn’t the greatest or most memorable of Danny Kaye’s musical films, but it allows him to display his versatility almost better than any other movie he ever made. The film looks and sounds about as good as its surviving elements will allow it, but this is not one of the more memorable releases in the Fox Studio Classics line.

Color fluctuations? Ouch. Is there color fringing associated with misaligned 3-strip elements on display? I'm curious to see if this digital effort is a new master and not a recycling of the DVD master, which came from one of those crap CRI dupes.

Lromero1396 said:
Color fluctuations? Ouch. Is there color fringing associated with misaligned 3-strip elements on display? I'm curious to see if this digital effort is a new master and not a recycling of the DVD master, which came from one of those crap CRI dupes.
Click to expand...

No, nor is it color breathing. It's just tones going from pink to brown within the same scene in different shots.

I'm sure Robert Harris will know if this is one of the Technicolor films afflicted with the infamous "Eastmancolor leftovers" Fox has once their three strip masters were junked.

Matt Hough said:
No, nor is it color breathing. It's just tones going from pink to brown within the same scene in different shots.

I'm sure Robert Harris will know if this is one of the Technicolor films afflicted with the infamous "Eastmancolor leftovers" Fox has once their three strip masters were junked.
Click to expand...

From what I've seen, it seems as though Fox created Eastmancolor elements on ALL Technicolor titles, even the ones shot on acetate stocks. I hope he gives us a few words on this disc, especially since he seems to have been quite busy off the forum lately (judging by his lack of reviews).
You must log in or register to reply here.