Peter Hunt's On Her Majesty's Secret Service really went into the world with rather unpredictable expectations. With no Sean Connery on board and being a movie that cost more than any previous Bond film, ran much longer than any previous Bond picture, and found itself surrounded by a general feeling of espionage fatigue, no one knew what the final results would be. As it turned out, the film eventually made its money back, but a recalcitrant new star wasn't asked back for another go, and the producers knew the future of the franchise was now on tenuous ground. This reissue of the previous Blu-ray release comes in new steelbook casing with a digital copy included, but the disc's contents are identical to the previous release. 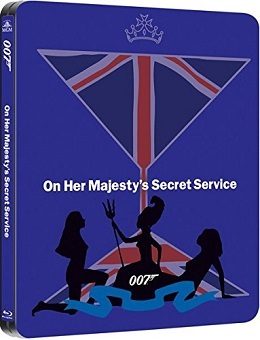 Having escaped from James Bond when his volcano-secluded fortress was destroyed, Blofeld (Telly Savalas) retreats to a Swiss Alp stronghold dubbed Piz Gloria. Here he plots his next terrorist attack, this time on Great Britain and the world in the form of a biological weapon targeted against agricultural and livestock producers of the world. James Bond (George Lazenby) is dispatched to stop him disguised as a mild-mannered genealogist. Along the way he meets, becomes fascinated by, and eventually falls in love with the madcap, thrill-seeking Tracy Di Vicenzo (Diana Rigg).

With several Bond adventures in the future taking place in ski resorts, this is the film that features the most impressive skiing stunts and most breathtaking Alpine photography. In fact, the entire enterprise seems to up the “wow factor” with a succession of stupendous fights (three in the first twenty-one minutes; according to authorities, George Lazenby won the role of 007 over his other contenders because he was the best at doing the action fight choreography in screen tests) and heart-stopping chases in cars (one memorable scene on an icy race course), two chases on skis, and a memorable climactic chase and fight on bobsleds. The middle sections of the 142-minute film sag just a bit as Bond tries to pass himself off as an intellectual not particularly interested in women, but the developing love story between Bond and Tracy is so involving (a beautiful montage sequence that is by far the most romantic interlude in any Bond movie as they’re serenaded by Louis Armstrong’s last song “We Have All the Time in the World”) and so unique to the series that it almost doesn’t matter. Having been an editor and then second unit director on previous Bond efforts, Peter Hunt came to the project fully versed in Bond, but this vastly complicated project went way over schedule and budget. There also seemed to be a bit too much ill-advised reminiscence about previous Bond films both in the main title sequence and in another moment when Bond goes to his office and begins sorting through memorabilia from his past as props (and musical themes) from Dr. No, From Russia with Love, and Thunderball are packed away.

Amid much world press attention, George Lazenby effortlessly stepped into the shoes of 007. Though he may have been a pill to work with on and off the screen, his recalcitrance doesn’t read on-screen at all, and one wonders if the next several Bond movies might not have been improved with his suave, easily commanding presence. Diana Rigg is lovely and fascinating as the troubled Tracy who inevitably lets herself give in to love, and Gabriele Ferzetti as her mobster/tycoon father has authority and on-screen confidence to spare. Telly Savalas as Blofeld is problematic looking or sounding nothing like previous incarnations of the role, being much more a man of action and not leaving Bond’s death to others (and why he wouldn’t recognize Bond after already dealing with him in the last film unless the films are not to be perceived as being in chronological order). Ilse Steppat is another memorable villainess henchwoman as Irma Bunt while Lois Maxwell as Miss Moneypenny gets her most generous amount of screen time in the series here as she first saves Bond’s job when he’s ready to quit and then later reacts genuinely to losing him to another woman.

The 2.35:1 Panavision aspect ratio is faithfully delivered in the 1080p presentation using the AVC codec. Unlike You Only Live Twice, the color here sparkles and has a vibrancy missing from the transfer of the last film. While flesh tones sometimes err on the pink side (especially in the film’s first half), color consistency otherwise is admirable. Sharpness is superb, too, allowing us to see facial anomalies and the texture of fabrics easily. Black levels are very good as is shadow detail. The main title credits are windowboxed with this transfer. The film has been divided into 32 chapters.

The DTS-HD Master Audio 5.1 sound mix is excellent (the avalanche sequence will test your sound system almost as much as any modern action film). Discreet use of the fronts and rears is noticeable if not always mixed with aplomb, and John Barry’s music (and Louis Armstrong’s rendition of “We Have All the Time in the World”) is once again given a greater emphasis in the fronts rather than the entire sound spectrum, but it boasts good fidelity. Though most of the dialogue has been placed in the center channel, there are patches of directionalized dialogue in certain scenes. There is also a Dolby Digital mono track included.

Audio Commentary: once again presided over by John Cork, and it’s once again a compilation of cast and crew comments both vintage and more recently obtained. Expertly aligned with the sequences being described, it’s another entertaining commentary track.

Casting On Her Majesty’s Secret Service (1:35, SD): a vintage glimpse of George Lazenby and Diana Rigg being interviewed by the press about the movie.

Press Day in Portugal (1:32, SD): another brief look at a staged press event purportedly during the filming of the wedding scene but actually mounted the day before the actual filming in another location.

George Lazenby in His Own Words (9:27, SD): an interview with the second screen Bond at the Dorchester Hotel in 1968 prior to filming and later on in 2002 reminiscing about his brief reign as Bond.

Shot on Ice (9:45, SD): a 1969 promotional film showing behind-the-scenes work on the sequence where Tracy must drive a car on ice to get away from some of Blofeld’s henchmen.

Swiss Movement (7:29, HD): another vintage 1969 featurette which stresses the international flavor of the casting of On Her Majesty’s Secret Service and focuses on the three month shooting schedule in the Piz Gloria location.

Inside On Her Majesty’s Secret Service (41:41, SD): a documentary featuring interviews with director Peter Hunt, star George Lazenby (who discusses his hiring, the difficult shooting schedule, and his firing), and others covering the basics of the production schedule.

Inside Q’s Laboratory (10:26, SD): an overview of the Q gadgets from many of the Bond films and offering a tribute to Desmond Llewelyn who had died when the Ultimate Edition DVD was being readied for market.

Above It All (5:41, SD): a behind-the-scenes look at how some of the ski sequences were shot by ace aerial cameraman Johnny Jordan.

Image Database: contains dozens of black and white and color pictures and artwork dividing the production photos into eight classifications.

One of the most memorable of all James Bond adventures due to its star’s single entry in the series and its concentration on human concerns rather than tricks and gadgets while not stinting on the action and adventure, On Her Majesty’s Secret Service in its original Blu-ray transfer is being offered in this new steelbook case exclusively at Best Buy though Amazon is listing the item for future sale (no date specified) and marketplace sellers are also there asking outrageous sums for it. Highly recommended for those who don’t already own a copy!

Presumably Blofeld didn't recognize Bond (or at least could pretend not to recognize him) because of Bond's disguise. The disguise was not very convincing, but they did dub Lazenby's voice with that of George Baker. Later Blofeld says "it takes more than a few props to disguise 007", so he obviously knew it was Bond all along and simply led him on.

Another classic! Go with the bond 50 set!
I noticed Best Buy has an exclusive Craig 3 bond film steelcase set tonight.
Target has the same set without the steelcase and it includes a 7 song bond hits download.
Target has a few of the bond films on blu Ray in stores with spectre ticket vouchers as well.
Happy hunting!


Personally i would give it a score for image quality of 2.5/5.


I should explain why i feel its an inferior product as otherwise people might think i am having a go at Matt's review since i also posted my disappointment about You Only Live Twice too in another thread, it's not personal i just love the Bond films.


Okay let me start by explaining about screen calibration and the contrast control, see an example of a calibration pattern below, ideally you want your display to show as high as 253, if your display has the contrast wrongly set then you lose detail within all the images and any programme or film you watch, how much depends on how you set contrast, most modern television displays allow you to set near maximum but then the image is too bright and your eyes will hurt after a while, projectors are different, it's a fine balancing act to get contrast just right which is why a good calibration disc will help you with that and black levels.


Now it's not just white level affected by incorrect contrast, colour is also affected and banding can be added to whatever source you are watching by setting your contrast control wrongly, this is true of displays but also true of blu ray transfers which have had contrast boosting applied, unfortunately if applied directly to a transfer it is impossible to recover the lost detail or cure any banding or contouring that may occur within the blu ray source.


I will also add that scanning tech has come on in leaps and bounds since the Bond films were scanned by Lowry/Reliance Mediaworks and underwent their digital process, a new modern 4K scan will bring out much more fine detail.


Now below is the correct contrast setting, note the visible bars and smooth gradients and zero colour clipping.

Contrast set too low on a display or baked into a blu ray transfer.

Contrast set correctly on a display or blu ray transfer.

I think George Lazenby did a great job playing Bond and this being one of the best Bond films.

A few years ago, Steven Soderbergh posted his thoughts on the movie. I rather agree.

One of my favorite movies. I saw the Soderbergh article a while ago and pretty much agree with everything he said.

This time they drop a mountain on him!!!

http://www.the007dossier.com/007dossier/page/On-Her-Majestys-Secret-Service-Radio-Spots
You must log in or register to reply here.