For many Baby Boomers, Robert Stevenson’s Old Yeller was one of the unforgettably singular traumatic events of our childhoods. This beautifully made family film offers its simple story with admirable clarity, enjoyable scoops of humor, and so much heart that even rewatching it decades after the fact can make one misty-eyed, both for recapturing a vivid childhood memory and for appreciating now as an adult the first-rate work turned in by everyone in making this one of the supreme live-action achievements of Disney’s feature film organization during his lifetime. 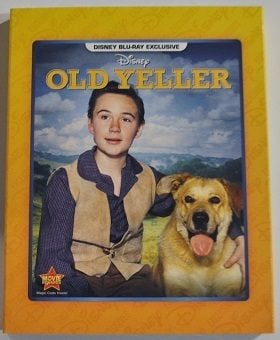 During his father’s (Fess Parker) three-month absence from their Texas farm while on a cattle drive, young Travis Coates (Tommy Kirk) must function as the man of the house mending fences, tending to the plowing, rounding up their cattle, and trying to provide game for the table by hunting deer, rabbits, and wild hogs. Into the lives of Travis, his mother Katie (Dorothy McGuire) and little brother Arliss (Kevin Corcoran) comes a scalawag yellow dog who initially steals food and wrecks the farm’s fence. Travis is all for shooting the dog then and there, but his mother’s cooler head prevails as the dog they name Old Yeller becomes very useful around the farm saving the lives of both Arliss and Travis and being the best dog imaginable for herding cattle and hogs and for keeping pesky raccoons out of the corn fields. But there is trouble ahead for the family. Burn Sanderson (Chuck Sanderson) comes looking for his runaway yellow dog and also brings news of a hydrophobia epidemic sweeping the area, both pieces of news being especially disturbing to the family who has come to love and depend on Old Yeller.

Author Fred Gipson has adapted his book for the screen in collaboration with William Tunberg, and they’ve turned out just about the most amenable combination of comedy and drama possible in their screenplay. They’ve been so smart to not make Old Yeller the perfect dog (he’s known for stealing smoked meat and eggs from neighboring farms, definitely a dog that needs a watchful eye and firm hand), and Travis’ initial resistance to him is all the more believable since he’s shouldering the major physical burden for the farm in his father’s absence, a burden made more hefty by Yeller’s initial mishaps around the land. The jaunty title tune by Oliver Wallace, though, serves the film well in a series of terrifically staged sequences showing the true ruggedness of Texas farm life in the post-Civil War era and Yeller's natural fit into these surroundings. Director Robert Stevenson has beautifully directed the amazing animal playing Old Yeller into a series of brave encounters with a bear, a recalcitrant cow, some sneaky raccoons, some of the scariest wild hogs imaginable, and, inevitably, a mad wolf. He also gives time over to the amusing childish antics of little Arliss whose days are one long joyous spree after another, often with Yeller leading the way. The shift in tone from joy to anxiety and then to fear is also handled superbly beginning with the injuries to Travis and Yeller in the hog capturing sequence and then later as the family waits to see if their beloved canine has succumbed to rabies, and while the movie never gets in-your-face graphic, there’s more than enough here to affect anyone who’s viewing.

Tommy Kirk may not be top-billed, but he’s the undoubted star of the movie (in addition to the title character, of course). He handles the dramatic scenes with real feeling and fervor, and his anguish late in the movie is palpable. Dorothy McGuire makes a sturdy, understanding, and loving mother, and Kevin Corcoran also in his first movie is all boy, all the time. Jeff York has a couple of very funny scenes as the lazy, mooching Bud Searcy, and Chuck Connors is range tough and tender as Yeller’s original owner. Fess Parker only comes in at the beginning and end missing all of the major comedy and drama as the father providing for his family, but Beverly Washburn adds another female presence as the young Lisbeth Searcy with a none-too-subtle crush on Travis.

Framed at 1.66:1 and presented in 1080p using the AVC codec, the high definition transfer for the film looks just fine most of the time. There is occasional softness in long shots, and sometimes color seems a trifle faded, or paler skin tones don’t seem to quite match scenes that come before and after. But for the most part, the image is clean and solid and in certain close-ups even dazzling. Compared to the Special Edition DVD released some years ago and framed at 1.75:1 in anamorphically enhanced widescreen, color values are pretty much on par with the Blu-ray (though less refined and a bit thicker), but the Blu-ray is infinitely sharper. The movie has been divided into 14 chapters.

This specialty disc doesn’t offer a lossless sound encode. Instead, the mix is Dolby Digital 2.0 mono, the mono sound replicating the mix heard in theaters with solid mid-range but not much to offer on the high and low ends. Dialogue is always easy to understand, and Oliver Wallace’s music and the sound effects all play together nicely in the single audio track. There are no age-related problems with hiss or other anomalies to report.

There are no bonus features offered with these Disney Movie Club Blu-ray specialty releases.

The movie is of prime importance, of course, and it’s certainly nice to see a clear, clean, and sharp version of Disney’s classic Old Yeller on Blu-ray. But fans of the movie will naturally be disappointed that one of the gems of the studio’s live-action holdings hasn’t been shown greater respect on Blu-ray. The movie is offered as part of the Disney Movie Club (www.DisneyMovieClub.com) though you can certainly find it offered at premium prices at Amazon (see below) and with other marketplace sites.

Excuse me, are you sure it doesn't have subtitles?

I found this BDinfo:

It does. I thought I had checked for them and not found any, but I was mistaken. The review will be amended. Thanks for pointing out the error.

I have now added a bit more A/B comparison information in the Video Quality section since I was finally able to lay my hands on the copy of the Special Edition DVD set this afternoon.

I'm still not entirely sure I understand why Disney refuses to give its live action films as much respect as its animated catalog. There are exceptions, but this film is widely regarded and the main star even has dog food named after him.
You must log in or register to reply here.