Director Carol Reed’s first film after his service in World War II was Odd Man Out, one of his three famous films (the others: The Fallen Idol, The Third Man) made for the J. Arthur Rank company after the war. It’s a gripping drama, filled with cinematic nuances and a gallery of very colorful characters and featuring a central performance by James Mason which made him an international star even though he spends most of the movie in a semi-conscious state barely able to walk or talk. 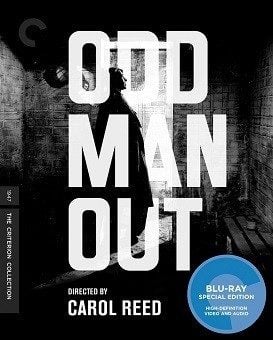 Shot during the robbery of a Belfast mill to secure funds for their faction of the IRA, Johnny McQueen (James Mason) is separated from his comrades and spends eight hours stumbling through the streets, alleys, junk yards, and residences both public and private in order to elude the police. A number of people come to his aid at different points during the evening, some sympathetic to his cause and others with the temptation of the £1,000 reward for his capture. Devoted girl friend Kathleen (Kathleen Ryan) makes it her mission to find Johnny despite a stern warning from the local inspector Denis O'Dea that they’re keeping an eye on her movements, but there are several others who are just as anxious to find him for their own reasons.

Based on the novel by F.L. Green, the screenplay by F.L. Green and R.C. Sherriff has added some important scenes not in the book which give more human and sympathetic dimensions to Johnny and instill for the viewer a rooting interest that he might somehow be able to get on that boat leaving the country at midnight. While Carol Reed’s intricate direction plays up the deep shadows of the long, wet alleys and the slowly converging police contingent on Johnny’s location fully promoting the likely doom of Johnny’s quest, it's not quite the chase movie that the film's first quarter hour suggests it might be: he also spends quite a bit of time (too much in a couple of instances) with characters who show their true colors for wanting to lay hands on Johnny. One of the most fascinating aspects of the movie is that these numerous people with whom Johnny comes into contact during his long night of wandering get lengthy segments devoted to developing their personalities, in effect giving each of them a star turn of his own: Reed is interested in conveying the motivations behind the actions of this motley crew of Samaritans: who’s greedy, who’s compassionate, who’s indifferent, who’s frightened, who’s self-centered or self-righteous. While it extends the movie’s running time to almost two hours, we’re certainly introduced to a surprisingly large gallery of fascinating people from the two-faced Aunt Teresa (Maureen Delaney) to the kindly Father Tom (W.G. Fay), the driven artist Lukey (Robert Newton) who wants to paint a man right before death to his medical assistant roommate (Elwyn Brook-Jones) who only wants to save his life. And then there are Johnny’s cohorts (Cyril Cusack, Dan O'Herlihy, Robert Beatty), two sisters (Fay Compton, Beryl Measor) who have differing ideas on what to do with a wanted man, and the calculating street rat Shell (F.J. McCormick) who can practically taste that reward money. Location shooting and studio backlots merge rather seamlessly in portraying Johnny’s harrowing trek to safety with Belfast’s clock tower regularly chiming to keep us abreast on how the night is progressing.

With his soft voice, pained eyes, and later miserable immobility with each step an agony that registers plainly across his face, James Mason can’t help but be an object of pity despite his character’s having shot and killed a mill executive during the robbery. His winning performance brought him to the attention of Hollywood and the rest, as they say, was history. Compared to the colorful characters who surround her (including the elderly Grannie played by Kitty Kirwan who steals every scene she’s in), Kathleen Ryan as Johnny's love offers a subtle performance of strength and tenderness. But it’s the character actors who have the field day here. Robert Newton (second-billed in a part that doesn’t show up until late in the film) received some criticism at the time for a broad performance as the eccentric painter, but he’s no more over-the-top than flat mate F.J. McCormick’s Shell who’s equally busy and broad. Denis O'Dea brings quiet dignity to his inspector’s role while W.G. Fay is likewise down-to-earth and loving as the gentle Father Tom. Robert Beatty has bounce and charisma as Johnny’s second-in-command Dennis in their IRA faction, while Maureen Delaney makes a major impression as one of the first snakes in the grass who pretends friendship to the IRA but who only wants the money their capture can bring her.

The film’s original theatrical 1.37:1 aspect ratio is faithfully rendered in this 1080p transfer using the AVC codec. The film aired on TCM a few weeks ago in a print that was littered with dust and dirt, but there are no traces of that here in a beautiful black and white transfer that offers strong black levels, delicate whites, and outstanding sharpness. One or two small scratches occur early-on, but most of the film is gorgeous to view aided greatly by consistently applied contrast and outstanding shadow detail. The film has been divided into 23 chapters.

The PCM 1.0 (1.1 Mbps) sound mix is typical of its era with a strong mid-level but limited highs and lows. Dialogue has been excellently recorded and is well balanced with William Alwyn’s lovely score and numerous sound effects. In the quieter passages, there is some slight attenuated hiss present, and there’s some occasional low noise which can be heard as well.

Template for the Troubles (23:50, HD): film scholar John Hill analyzes the film’s impact by noting a brief history of the Irish civil wars and the work of the IRA, the noir influences in the film as well as its bows to German expressionism and French 1930s realism.

Postwar Poetry (15:46, HD): directors Guy Hamilton and John Boorman along with three film historians discuss the film and its rank among the other works of Carol Reed particularly in this particular period of his career.

Home, James (53:45, HD): a 1972 television documentary in which James Mason introduces us to his hometown of Huddersfield as he returns there and notes the changes and continuing mores of the community where he grew up.

Collaborative Composer (20:40, HD): music critic Jeff Smith discusses William Alwyn’s haunting score for the film noting how he and Reed forged a strong cooperative union for mixing his score with sound effects, playing the film’s three major leitmotifs and then illustrating examples of where they appear in the movie.

Enclosed Pamphlet: contains a couple of film stills, cast and crew lists, information on the transfer, and noir expert Imogen Sara Smith’s essay on the movie.

Carol Reed’s Odd Man Out is still a magnificent film, gripping in all the best ways and filled with unexpected twists and turns before its final, inevitable tragedy. Criterion’s Blu-ray release offers top-notch picture and sound with a host of interesting and unique special features. Highly recommended!

I must respectfully question the image quality of this disc. As a longtime worshipper of this superb film. I have sought out and owned every available version - even purchasing a region free player in order to view the Network Region B blu-ray.


In comparing this Criterion Blu to the Network Region B, I find the Criterion very soft looking. The vastly superior sharpness of the Network, does not seem to be the result of any edge enhancement. I can detect none, and am very sensitive to it. I'm viewing on a 106" wide screen, so it should be obvious if present.


This softness has been noted in the DVD Verdict review. The DVD Beaver comparison screenshots represent the difference very well. The Beaver reviewer states that while the Criterion may appear softer, he doesn't believe it is. I find this to be wishful thinking in order to give the Criterion it's usually well deserved praise. We all love Criterion - with very good reason. But with this release, I think they have fallen quite short.


I am not and expert - merely a very experienced film fan, with the good fortune to have an excellent home theater. I would love to read comparisons from someone more expert than I.


Robert Harris are you listening? I think a film as fine and important as this deserves a truly expert comparison.

I can't say if you're right .. but I hope you are as I bought the Network version and was thrilled by its clarity and contrast. I envy you the luxury of being able to do a direct home-theatre comparison. On my home projector setup, the Network was startlingly good.
You must log in or register to reply here.