Josh Steinberg said:
Is it possible that Disney is a/the source of mismanagement?
Click to expand...

If that were the case, why aren't all of the other Disney shingles (Marvel, Pixar, Disney Animation, 20th Century, etc.) experiencing similar issues on nearly every project?

The untimely death of Carrie Fisher was an unforeseeable bit of bad luck. Everything else is something that management can and should have anticipated.

Marvel has had directors not work out -- Edgar Wright prior to Ant-Man, Scott Derrickson prior to the Doctor Strange sequel, as two examples. But Kevin Feige makes sure Marvel Studios and the creative team are on the same page much earlier in the process, so that if the collaboration doesn't work it has much less impact on schedules and release dates.

The Force Awakens is actually the one project I don't fault Kennedy for. Given the constraints of the Disney acquistion, it's a miracle that it turned out as well as it did. I give Lucasfilm a lot of credit for relaunching the brand with a movie that brought in over $2 billion worldwide.

But Trank was already in the middle of shooting Fantastic 4 when Lucafilm hired him. It seems like it would have been easy to ask around town about how that was going before extending an offer.

Lord and Miller's style of making movies was well known around town when they were hired. If fidelity to the Kasdans' script was the priority, they should have known better than to hire them for that movie.

Up until a couple weeks ago, I would have agreed with you about Trevorrow. But the leaks indicate a movie that would have been at least as flawed as Rise of Skywalker ended up being.

I’m not convinced there’s one single source for the turmoil. Maybe the difference between Lucasfilm and those other Disney branches is that they were all up and running and actively making films when Disney stepped in, and Lucasfilm hadn’t made a live action film since 2012 or a Star Wars since 2005. Lucas built the company and all the vendor companies that do effects and post for the films. I’m getting the sense that they weren’t prepared to ramp up with so many different things at once, which is at least partially on them, but I think Disney might have pushed a little hard too.

With Lord and Miller specifically, that they like to improv is one thing. That they refused multiple direct orders is another. They come from television where you have to work as part of a team to make a whole, and I’m sure that’s what Kennedy and Disney thought they were getting. I just don’t think it entered any of their minds that the guys they hired would repeatedly refuse to do the work they were hired for. To me, the most damning thing is that they shot for almost the entirety of the shooting schedule, but only something like 25% of what they shot was usable. That’s the insanity part. I mean, why are you even on that project then? What do you think the result would be?

But maybe the studio also presumed that filmmakers would be more reverent to the material just because it was Star Wars, and that’s a mistake.

For Trank, I think he got the offer because Kinberg vouched for him, and then lost it when he screwed up under Kinberg’s watch.

Josh Steinberg said:
I’m not convinced there’s one single source for the turmoil.
Click to expand...

Yeah, I don't know enough about what's going on behind the scenes to point to one thing and say, "This is the problem!"

But there clearly is a problem that needs to get rectified at Lucasfilm so it can have a smoother workflow.

I have no idea what’s going on behind the scenes, but just because Disney appears to be handling Marvel right doesn’t mean they will handle everything right.

^ Say what you will about George Lucas personally, but it's undeniable that Lucasfilm under his leadership was an extremely well-oiled machine by the time the prequels were made. What's frustrating is that Disney has now had nearly eight years (eight years!) under the new corporate management to sort their game out, but are still stepping all over their own feet with stuff like this (plus the other situations mentioned above, like Lord/Miller and Josh Trank), stuff that could've very quickly gotten fixed early on with a bit of basic, common-sense due diligence.

I'm certainly no Kathy Kennedy-hater or anything (and she's not 100 percent to blame for everything going on), but some of the backstage stories I've heard from my high school classmate-friend who's working at Disney/Lucasfilm absolutely curled my hair when he told them to me.
Last edited: Jan 25, 2020

We've talked a lot about the problems that Lucasfilm has had under Kathleen Kennedy here and elsewhere on the forum.

I should also add that because I hated The Rise of Skywalker, I am significantly less emotionally invested in Star Wars right now than I was a couple moths ago. This doesn't mean I categorically won't watch the Obi-Wan show, but does mean that right now, my enthusiasm has been muted.

That being said...I think it's a little weird in this case that people all over the internet are harping on the fact that they're pumping the brakes in order to make the work better.

It feels like everybody here said, "They should move Solo to December" in order to have more time to work on it (not to mention the marketing benefits of sticking with the now-standard Disney-era December release window for Star Wars.) They didn't move it, and the movie was rushed, and some people liked it and some people didn't like it -- I thought it was fine -- but it did feel like they could have used the extra time.

As @Josh Steinberg noted, both The Force Awakens and Rogue One were also rushed into production to meet an arbitrary release date that Disney refused to move. And for The Rise of Skywalker, Abrams was hired in September 2017 and had to deliver the film by November 2019 to make a release date in December. Again, it was probably rushed.

Here, they're not rushing things and people are still upset?

I’m of the mind that doing it right is better than doing it now, as frustrating as it can be as a fan when you just want it now. Lucasfilm TV just gave us a really nifty Mandalorean TV show instead of a rushed Boba Fett movie. Clone Wars is coming back. Rebels was awesome. The TV division has my faith and if they have an idea to make something better, they’ve earned my trust. Most important thing here is that you’ve got interest from the company in making the show and enthusiasm from the lead actor in playing the part. As long as that’s there, I’m good.

Jake Lipson said:
Here, they're not rushing things and people are still upset?

Leaving aside that there's another LFL project that is having problems, I'm happy that they recognize that there's a problem and are trying to fix it.

I guess I'm very zen about it compared to a lot of people I've seen complaining about it (not here so much, but elsewhere.) Yeah, it would be nice to get something we are looking forward to right now. But in a few years when it's all finished and out, it won't matter how long it took to get it. But it will matter if they rushed an inferior show out to make a date, so I'm good with waiting as long as it takes. I've said the same thing regarding delays for Guardians 3 (albeit for different reasons) and Toy Story 4 (back when Toy Story was delayed repeatedly) and whatever other projects. Toy Story 4 was absolutely worth waiting for, and hopefully Obi-Wan will be too.

Considering how far out it already was to actually getting to my eye balls, it couldn’t have been further from my anticipation radar. This news matters little to me.

Hayden Christensen reportedly in talks to reprise his role of Anakin Skywalker on the new McGregor-show;

It would almost certainly be a dream sequence or a flashback. By necessity, it would be a minor role at best.

Sam Favate said:
It would almost certainly be a dream sequence or a flashback. By necessity, it would be a minor role at best.
Click to expand...

Yeah, Padme has made multiple brief appearances in Darth Vader comics that way and they've been quite effective.

I would be glad to see Hayden back in the fold and I’m glad that he was included in TROS.

It’s perfectly fine to not enjoy the SW films he’s been in or to think he wasn’t good in him, but the torrent of abuse that he received from so-called fans who bullied him for years for the crime of doing the job he was hired to do (as they did with Jake Lloyd and Ahmet Best) is simply unacceptable.

TravisR said:
Yeah, Padme has made multiple brief appearances in Darth Vader comics that way and they've been quite effective.
Click to expand...

She also plays a sizeable role in Timothy Zahn's recent novel Thrawn: Alliances, where there's a major flashback-counterpoint to events during the Clone Wars with the "present-day" (post-Revenge of the Sith) storyline of the book. 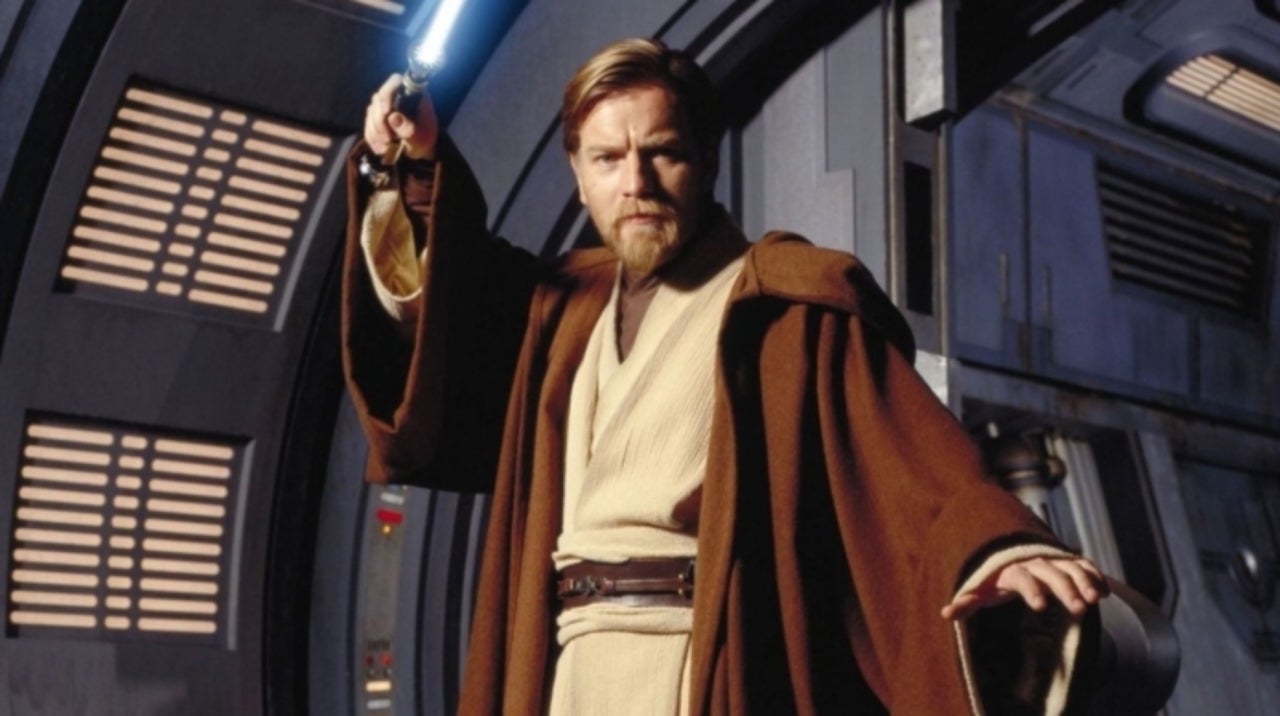 Looks like Ewan was in full Jedi costume while on the set of The Mandalorian (shooting screen-tests with director Deborah Chow):

"I walked into the dressing room and there were my beige cloaks, and my belts, and boots, and it was like–'oh my god.'"

joshEH said:
Looks like Ewan was in full Jedi-costume while on the set of The Mandalorian (shooting screen-tests with director Deborah Chow):

"I walked into the dressing room and there were my beige cloaks, and my belts, and boots, and it was like–'oh my god.'"

Man, I can't wait until the first commercial is released and you get to see him in character again.
You must log in or register to reply here.