Charlton Heston played so many larger-than-life characters in his career than when it came time to play regular guys (even those imbued with special gifts), it seemed sometimes difficult as an audience to adjust to his status as an ordinary man. His role in Tom Gries’ Number One certainly walks the tightrope between average and gifted, and there is more negative than positive about his selfish, loutish character, but this story of a man in mid-life crisis mode holds one’s attention even if the film’s script doesn’t quite come to terms with any of the conundrums it throws out for its protagonist or the audience. 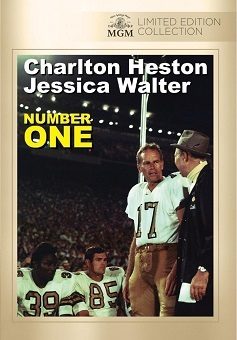 New Orleans Saints star quarterback Ron Catlan (Charlton Heston) has had twelve good seasons as the top quarterback in the NFL, even once earning a championship ring, but at age 40, he’s beginning to wear out. Having had a miserable pre-season, he now must decide whether to try for another season or retire and pursue other opportunities. Head coach Southerd (John Randolph) thinks he’s got three good years left, but Ron isn’t so sure especially with an over-eager young quarterback (Richard Elkins) nipping at his heels. Former teammate Richie Fowler (Bruce Dern) is making great money in the automobile leasing business and offers to bring Ron into his company. Ron is also looking into using his mathematics degree from Notre Dame to enter the burgeoning field of computers. But Ron’s wife Julie (Jessica Walter) who’s enjoying her own success with fashion design isn’t any help, and Ron still finds the lure of fans and groupies like the gorgeous Ann Marley (Diana Muldaur) enticing, so making a final decision is exceedingly difficult.

David Moessinger’s screenplay offers plenty of conflicting options for Ron’s mid-life crisis, and director Tom Gries does a good job laying them out one at a time (he even uses split screens nicely in a couple of different sequences), but the script doesn’t do very well in developing these options to allow them to be viable choices for the conflicted Catlan. There are brief discussions about potential business ventures without any serious considerations being given to these opportunities, and we never know which way Ron is leaning in his final decision (and, of course, with the ambiguous ending to the movie, everything is very much in doubt). Gries struggles with the film’s timelines as he fades into and out of present and past recollections of Ron’s as the athlete recalls pertinent moments in his career (going in the game for the first time, winning the championship, various injuries), but with Heston playing himself more than a decade ago not looking significantly different from the Heston in the present-day scenes, time sequencing becomes a problem. Gries and film editor Richard Brockway have done a very good job melding fresh scenes on the field shot with Heston in the number 17 jersey with actual Saints footage with their real number 17 quarterback, and the football games themselves are probably the best representations of the sport on film until the advent of Any Given Sunday. The personal side of Catlan’s life is also not handled particularly well. We see there are problems, but we don’t understand them: is Ron jealous of his wife’s success and the pleasure she takes in her work? Is he honestly dissatisfied with their sex life (the lovemaking montage done in impressive triple exposures is between Heston and Diana Muldaur’s Ann Marley, but she doesn’t seem significantly younger or any more appealing than Jessica Walter’s supportive wife Julie)?

Charlton Heston’s Ron Catlan is not a very nice man. He’s spoiled, vain, cocky, and demanding (he always finds everyone else at fault and never himself in any quarrel or dispute). Heston acts it for all it is worth and turns in a one-sided if very compelling portrait of a superstar athlete struggling with maintaining his status and allure. Jessica Walter gives a lovely performance as the woman caught up in her husband’s crisis and unable to be whatever it is he wants her to be. John Randolph does his usual great job as the hard-driving, plain talking head coach, and Bruce Dern has several appealing scenes as the athlete who got out at just the right time and has parleyed that into a big success for himself. Diana Muldaur is no doey-eyed ingénue swept up in raptures with a big football star but rather a down-to-earth woman who has no regrets even about a one-night stand. Former NFL player-turned-actor Mike Henry has some good scenes late in the movie, but Ernie Barnes, another former player-turned-actor, delivers his lines in a stiffer, less confident manner. As Julie Catlan’s gay fashion assistant, Steve Franken is fairly stereotypical, and there’s an ugly scene between Franken and Heston’s characters that is completely unnecessary to the drama (we’ve already figured out Heston’s Catlan is a jerk). Trumpeter Al Hirt also pops in for a quick jazz riff and a few words which he delivers with aplomb.

The film’s original theatrical aspect ratio of 1.85:1 is faithfully rendered in this great-looking transfer that is anamorphically enhanced for widescreen televisions. There is plenty of detail in facial features, hair, and clothes in close-ups, and only a couple of tight shots seem soft, likely an error of the film’s focus puller. Color is agreeably solid and appealing with mostly realistic skin tones (there is an occasional rosy blush to some complexions, but that isn’t typical). Black levels are excellent, and contrast has been consistently applied. Only a few sporadic dust specks intrude on a really first-rate film transfer (this doesn’t include various NFL stock footage which with scratches and specks varies greatly in quality, of course). The movie has been divided into chapters every ten minutes, so this film has 11 chapters.

The Dolby Digital 2.0 sound mix is decoded by Dolby Prologic into the center channel. The mono soundtrack is quite usual but very effective for its era with nicely recorded dialogue melding smoothly with Dominic Frontiere’s contemporary musical musings and the appropriate boisterous sound effects for a sports-dominated story. And the sound is used tellingly in the film’s surprising climax which aids greatly for the important impact of the images.

Number One might have been an even more gripping drama with a screenplay that delved even more deeply into the psyche of an athlete facing the end of his fabled career. As is, it’s still imminently watchable, and fans of the star will definitely be pleased with the excellent quality of the made-on-demand disc being offered here.

Wow, been looking for this one for years. Had no idea it had been released. Ordered!!
T

Hear hear!!!! This is on my XMAS list of movies-to-get--the only DVD release to now make the cut!!!! My order is going in right away also, Richard!!!!

Got it day one and your review is spot on. It is a great looking disc.
You must log in or register to reply here.