It may be set in London, but Jules Dassin’s Night and the City is as smashing a film noir as any that are set in Los Angeles or New York. Rough, sometimes grotesque, often overpoweringly nihilistic, Night and the City has a reputation that’s grown tremendously over the more than half a century since it first premiered, and a somewhat interesting if flawed 1992 remake has done little to stifle the impact of the grand original version. 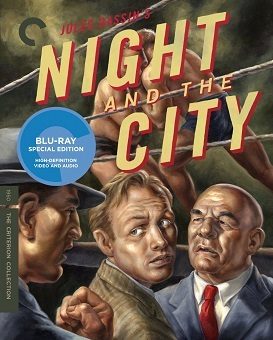 Two-bit hustler Harry Fabian (Richard Widmark) dashes recklessly from one get-rich quick scheme to the next, always coming up short and needing to be bailed out by pretty longtime friend Mary Bristol (Gene Tierney). But after Harry accidentally befriends a grizzled but great Greco-Roman wrestling champion named Gregorius (Stanislaus Zbyszko) who defames modern wrestling as crass and fake, a sport now controlled in London by Gregorius’ mobster son Kristo (Herbert Lom), Harry sees the potential to use Gregorius’ fame to build his own wrestling empire in the United Kingdom. He’ll need start-up money, of course, at least £400, and for that he enters into a deal with Helen Nosseross (Googie Withers), the unhappy wife of another of London’s graft merchants Philip Nosseross (Francis L. Sullivan). For a while, it appears things may finally be going Harry’s way, but his new empire is actually a house of cards that will quickly collapse if any one single element of its construction slips out of place.

The film begins and ends with Harry Fabian running for dear life (at the end, literally), and everything in between has been marvelously set up by Jo Eisinger’s superb screenplay (based only in part on the novel by Gerald Kersh who greatly disliked the changes the movies brought to his story). Rarely has a film noir spelled out with such surety the complex nature of underworld events that gather together to bring ruin or worse on the increasingly desperate Harry Fabian. Jules Dassin makes fantastic use of London locations to etch a morbid portrait of the London fringe underworld, and the harsh lights, long shadows, and growing frantic pacing of events combine to make this probably the best film noir ever shot outside America. The film’s most famous sequence is a wrestling face-off between the pure Greco-Roman technique of Gregorius and the showy, roughneck methodology of Kristo’s champion The Strangler (Mike Mazurki who also served as wrestling consultant on the film). It’s four-plus minutes of bone crushing, flesh pounding action (only the wild no-holds-barred bout in The Wrestler comes close to the intensity of this match) with the winner (for first timers) always in doubt and the resulting sequence one of true beauty and memorable fragility. Elsewhere, Dassin brings his camera above the action at critical intervals and into close-ups when emotions are crucial, the film surely representing one of his greatest achievements.

Richard Widmark may overdo his famous chortle from time to time, but he captures the stars-in-his-eyes dreamer and the frantic loser in all of its complexity throughout the movie making for one of his most unforgettable performances. Matching him move for move is the terrific Googie Withers, his female counterpart, as desperate as Harry and just as starry-eyed about finally getting her freedom from her overbearing husband as Harry is about finally making his big score. Herbert Lom is all simmering evil as Kristo, and Francis L. Sullivan as the two-faced hood anxious to bring Harry down while appearing to be his backer makes a very memorable impression. Stanislaus Zbyszko brings a noble face and stature to the proud Greek athlete, and Ken. Richmond as his protégé Nikolas of Athens shows genuine concern for his welfare. Less impressive (not because of performance but simply as underwritten characters) are Gene Tierney and Hugh Marlowe as secondary characters who figure into Fabian’s life here and there but are absent from long stretches of the movie.

The film is presented at 1.33:1 and is offered in 1080p resolution using the AVC codec. Apart from some weak black levels in the opening scene or two, this is a gorgeous transfer with crisp whites and inky black levels and sharpness that is impressive throughout. There are no age-related problems with dirt or scratches, and contrast has been consistently applied to produce a top-notch image. The movie has been divided into 24 chapters.

The PCM 1.0 (1.1 Mbps) sound mix offers very good fidelity for its age. Dialogue has been excellently recorded and has been mixed thoughtfully with Franz Waxman’s impactful score and the atmospheric sound effects appropriate to the era. There are no problems with age-related anomalies like hiss, crackle, pops, or flutter.

Audio Commentary: critic Glenn Erickson offers a dazzling analysis of the movie offering information on the production and cast, comparisons to the book and British version of the movie, and insight into the career of Jules Dassin after the making of the picture as a victim of the infamous blacklist.

British Version of Night and the City (1:40:46): running some five minutes longer but with a different main title, a different score, and several scenes that make for a slightly different (and less hard hitting) picture, this is presented in 1080p with a Dolby Digital 1.0 sound mix.

Jules Dassin Interview (17:52, HD): a 2005 interview with the director who talks about the blacklist and its impact on the making of the movie, the casting of the film, his lack of knowledge of the original book, and his impressions of Richard Widmark, Gene Tierney, and composer Franz Waxman.

L'invité du dimanche (25:26, HD): Jules Dassin is interviewed in 1970 on French television recalling his Hollywood years and his struggles with the blacklist.

Pamphlet: contains cast and crew lists, information on the transfer, a gorgeous lithograph of the film on the back cover of the pamphlet, and an essay by film scholar Paul Arthur.

One of the great films noir and as extraordinary a portrait of a life of complete desperation as one is ever likely to see on screen, Night and the City is a near-masterpiece. The Criterion Blu-ray with outstanding picture and sound and which ports over the bonus material from its 2005 DVD release comes highly recommended!

Great review of a superb movie Matt. I have the German blu ray which is a fine transfer. Acquiring this edition with the alternate British version is highly tempting.

For those who may not know, Herbert Lom's real name was Herbert Charles Angelo Kuchacevich ze Schluderpacheru. A Czech. Difficult to put that one in lights.......

On the fence on this one. I'm still happy with the (PG) German BD release of a few years back. The Criterion wins in the extras dept., but from what I can gather, reading the reviews, the German BD has the more "noirish" (darker) look. Should the shadows be black, or a gray scale gradient? Not sure which is correct.

Reed Grele said:
On the fence on this one. I'm still happy with the (PG) German BD release of a few years back. The Criterion wins in the extras dept., but from what I can gather, reading the reviews, the German BD has the more "noirish" (darker) look. Should the shadows be black, or a gray scale gradient? Not sure which is correct.
Click to expand...

I don't have the German BD, but this Criterion BD is outstanding. Very shortly, I'm going to watch the longer British version that's on this disc.
You must log in or register to reply here.