I believe the villain Superman and Lois were fighting in the flashback was ATOM-MAN.
That villain had a storyline in the ADVENTURES OF SUPERMAN Radio Series.

Adam Lenhardt said:
The first half of tonight's episode was a fun origin story for this version of Superman, fleshing out the montage that opened the series premiere. I really love this version of Martha Kent.

We also got to see key milestones of Kal-El's journey paralleled in Tal-Rho's, only with a darker spin. One of the key differences, of course, is that Jor-El inspired the best in Kal-El while Zeta-Rho brought out the worst in his son.

Whatever process was begun at the end of the episode in Tal-Rho's desert fortress of solitude hints at what may have happened on John Henry Irons's Earth: Perhaps that Kal-El wasn't faking being good before the betrayal; perhaps he really was good, like this Superman, and then the House of Rho stripped him of that goodness.

A key difference on this Earth is that Kal-El had hybrid children, and at least one of the children has superpowers.

I don't know that I bought Sarah throwing herself at Jordan, but I did appreciate that characters being honest and telling the truth actually had a positive outcome, when so many of the Arrowverse shows have been dependent on lies to drive the drama.
'
The show is off for two weeks, and then back on July 13th. There are only four episodes left, and they're still shooting the first season, so it's going to be a real race to the finish. The season finale is currently scheduled for August 17th, so I wouldn't surprised if there are another two weeks of repeats after the new episode on 7/13.
Click to expand...

(1) re: Martha. It's strange when my wife and I think the same thing at the same time. During the scene with Martha giving Clark the Superman costume, I said, "I can't help but think of the trying-on-the-costume scene in where Clark questions not having a mask, and Martha says, 'Trust me. No one's going to be looking at your face." My wife said she was thinking the same thing. Then I said, "It's weird seeing her with hair," and my wife said, "I was thinking that, too."

(2) re: "milestone montage" It was cool seeing Superman having the original (1938) Superman outfit design from the comics. And the homage (even if the circumstances were different) to the cover of Action Comics #1 with the green sedan: 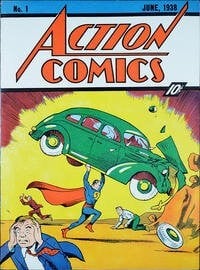 I also liked the switch in that instead of Lois becoming infatuated with Superman and not giving Clark the time of day, it was the other way around.

(4) re: Sarah and Jordan. I bought it. The tension was there almost from the beginning.

Don't know where they are going to take the Lana and Karl story since their season 1 arc seems to be completed.

The Superman costume used in the flashback was more in line with the Paramount cartoons then the 1938 comics. Just watched this week's episode tonight. I hope they really don't turn him.

Now in the preview for the next episode ...

"I thought I saw Diggle from Arrow. So, a link to the rest at last?"

Garysb said:
The Superman costume used in the flashback was more in line with the Paramount cartoons then the 1938 comics.
Click to expand...

Yes, definitely a recreation of the costume from the Max Fleischer cartoons.

When I was a kid, the library at my elementary school had a massive bound volume with reprints of Superman comics chronologically starting with Action Comics #1. With the exception of the "S" shield, the costume had basically evolved into its classic look by the end of 1938. Some versions of the S shield in the comics in 1940 looked similar to the S shield from Snyder's Man of Steel.


NeilO said:
Now in the preview for the next episode ...

"I thought I saw Diggle from Arrow. So, a link to the rest at last?"
Click to expand...

That was my first thought when I saw the promo as well. That being said, the actor in question in playing a completely different character in an upcoming episode of "Legends of Tomorrow", so it might not be who we're thinking it is.

The evolution of Superman video done for the 75th Anniversary shows the changes from 1938 to 2013. Except they got the 1960's Supergirl costume wrong. Her skirt was blue not red.

Another good episode last night. Edge's father really is a piece of work.

It looks like we get another new episode next week, then 2 weeks offs before the final 2 episodes of the season.

Yes, I appreciated that they avoided evil Superman's reign of terror, and a crucial decider in that was John Henry Irons listening to Lois and Jonathan.

I also liked how the fallout of the Morgan Edge scandal brought the Cushings back closer together. This show does those small, rural domestic moments really well.

Big episode too in terms of confirming that this show is indeed part of the Arrowverse, with John Diggle not only making an appearance but also referencing events from the other shows. I love the respect this show has for its characters, and the care with which they navigate their interpersonal conflicts. They genuinely talk with each other instead of at each other.

Returns tonight on The CW at 9/8c, following the second season premiere of "Stargirl".

Season finale next week. They have done a good job this season. I have no idea how they will resolve this. I really do hope this Edge/Tal-Rho/Eradicator is completely taken care of and will not appear in the next season.

Irons' timely hammer throw was a highlight of the episode.

Strong end to a very strong first season. Resolved all of the season's plot lines while laying some very intriguing breadcrumbs for next season.

Liked that the Cushings earned their redemption in the finale. Also liked that Sam Lane ultimately chose his family over his career.

I enjoyed the finale quite a lot. Things have definitely progressed a long way from when we thought a Lex Luthor was out to kill Superman in the beginning of the season. It was a good season arc for the characters.

One thing I don't think we know is this
What was done with "Morgan Edge"? Did Superman return him to DOD custody? I guess that is where Larr still is. The two of them can still cause some trouble. Were the soldier's minds restored?

NeilO said:
One thing I don't think we know is this
What was done with "Morgan Edge"? Did Superman return him to DOD custody? I guess that is where Larr still is. The two of them can still cause some trouble. Were the soldier's minds restored?
Click to expand...

Showrunner Todd Helbing spoke with TVLine and confirmed that:

Both Tal-Rho and Leslie Larr are still alive, in DoD custody, and will likely appear again in some capacity down the road.
Also, in a bit of casting news:

Tayler Buck, who plays the STEM-gifted 14-year-old daughter of John Henry Irons and his Earth's Lois Lane, has been promoted to series regular for Season 2.