New Outlaw Model 976 Controller but no OBA just yet...

Outlaw Audio, who made quite a stir with their internet-only sales pre-amp, the Model 975, have upped the stakes again with a brand new addition to the line, the Model 976. While there will be some who decry the lack of object-based audio (OBA) on this latest box from the garage-based boffins, the company has always contended that it was concentrating on audio quality. Indeed, many reviewers of the slim-line 2U rack space 975 claimed it sounded better than AV controllers costing two or three times as much.

The newly announced 7.2 channel balanced processor Model 976 is available now for pre-order and the word on the street is that it will ship in time for Christmas. 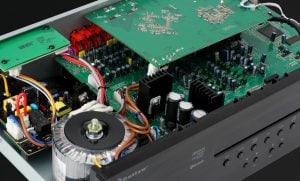 No one can doubt the challenge that a small company faces when developing sophisticated AV electronics, and ever-moving tech goalposts require design parameters to be constantly revisited during R&D. Outlaw claims that the 976 does not replace a planned object-based processor, but the single architecture adopted here will form the foundation of a product with all the overhead sound trickery promised in its next version.

But the good news is that this versatile slab will only set you back $899 for what Outlaw says is a "best in class" product. It includes six HDMI inputs, with one on the front panel for quick connection of portable devices. Four of the inputs are HDMI 2.0b, HDCP 2.2, and are capable of 18Gbps bandwidth. Obviously, this means that all of the latest UHD formats, including HDR-10, Dolby Vision, HLG and the forthcoming Advanced HDR by Technicolor will flow through the 976 to any 4K/HDR-enabled display without a hitch.

While an advanced dual-core DSP handles decoding, the unit is augmented by both balanced and conventional outputs fed by high quality TI/Burr-Brown DACs. There is a pure analog 7.1 multi-channel input stage, and for those who wish to create a custom-tailored sound, there is a manual, ten-band PEQ system (as well as a simplified audio setup system for the 'novice').

Hi Martin - Forgive me if I'm missing something but this is a curious product IMO precisely for the reason you mentioned, no OBA. I can't find any specs for HDMI 2.0 B but most of the specs you mentioned [18Gbps bandwidth and HDR support] are already included in the HDMI 2.0 A spec. This seems like a strange stop gap for Outlaw if they are really committed to releasing another new processor with OBA just a couple of months from now.

Thanks, John. HDMI 2.0b included some refinements over 2.0a including support for HLG (which has little support so far), and 2.0b is what is found on most 2017 marketed TVs. I don't think you'll see another controller emerging from Outlaw until at least the end of 2018. But for someone who has ruled out OBA for their home theater, and has a nice stack of power amps, I would say the price makes the 976 quite an attractive proposition.
You must log in or register to reply here.