And Will and Mike as well...

farnsbarns said:
Just my opinion, but sure hope it's better than Season 3. Aside from great job on the period look it was abbreviated season, [snip]
Click to expand...

You've said this a couple of times, and I don't understand what you're going on about. "Abbreviated season"? Season 3 was not "abbreviated" or "condensed" relative to either of the first two seasons. Season 1 was 8 episodes, Season 2 was 9 episodes (and many people thought ep7 could've been left out entirely), and Season 3 was 8 episodes. And Season 4 appears to be 9 episodes again.

jayembee said:
So...are we assuming "Vol 1" will be five episodes and "Vol 2" will be four?
Click to expand...

Don’t know about the number of episodes, but lengthwise, the season is going to be twice the length of S3!

Joe Wong said:
Don’t know about the number of episodes, but lengthwise, the season is going to be twice the length of S3!
Click to expand...

I'm guessing that they mean that the episodes themselves will be longer. As for the number of episodes, there was a teaser trailer back in November (see post #56 in this thread) announcing the titles of nine episodes. I suppose those could be all released on May 27, with others coming on July 1, but I suspect not. Nine episodes total also fits the pattern so far: S1 (8), S2 (9), S3 (8), S4 (9).

I'm also assuming that they will still be releasing each "volume" all at once, since Netflix seems to still do that with all of their shows (unlike some of the other streamers).

Glad to see this is finally on track to come back. Obviously, they had a ton of COVID delays, like everyone else, but this was a very long time to go without a word on when to expect anything.

I’m a little mixed on the release schedule.

I’ve more recently preferred to watch streaming shows weekly because I like having a regular weekly installment of something I enjoy for a couple of months. However, Stranger Things was still going to be the exception that I watch over the course of 3 nights.

Having a month long break in the middle of the season kind of throws that off. But it also forces the show to last longer. If the episodes really are closer to 90-100 minutes then spreading the viewing out might be more comfortable than binging anyway. Will have to see how it shakes out.

Really looking forward to this. I also think it’s cool that it’s coming out on two Summer holiday weekends.

I like being able to watch several episodes in a row, and I don't like waiting for episodes to pile up so that I can watch several of them in a row. On the other hand, binging an entire season of 10-13 episodes has its own problems. I rather like the approach taken by HBO Max for some of their series, where they'll release two or three episodes at a time, a week apart. It's kind of the best of both worlds.

I like the staggered release. Frankly, I prefer the Disney/HBO way of one episode per week.

If you release the entire season at once, there’s always some guy who stays up all night and watches and then spoils everything while you’re eating breakfast like a normal person.

I would have preferred the entire season drop at once, but even the second batch of episodes is going to arrive before I thought we'd see any of the fourth season. So from that standpoint, it's a pleasant surprise.

Having the three day weekends for both batches is definitely a plus.

Here is the full press release from Netflix: 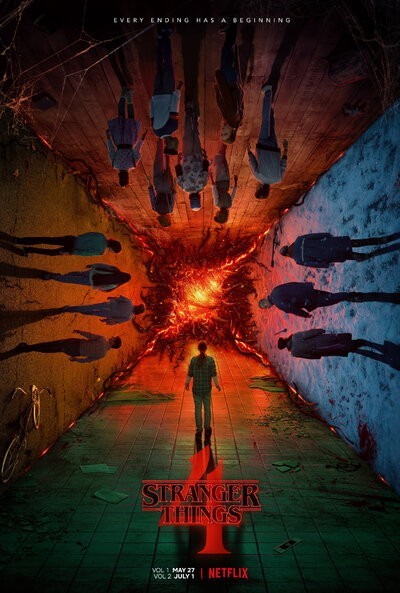 ​
17 February 2022​
​
Stranger Things 4 is coming! In an open letter to fans, series creators the Duffer Brothers revealed when new episodes will debut on Netflix, and more news about the future of the worldwide hit.​
​ ​
About Stranger Things 4​
​
It’s been six months since the Battle of Starcourt, which brought terror and destruction to Hawkins. Struggling with the aftermath, our group of friends are separated for the first time – and navigating the complexities of high school hasn't made things any easier. In this most vulnerable time, a new and horrifying supernatural threat surfaces, presenting a gruesome mystery that, if solved, might finally put an end to the horrors of the Upside Down.​
​
Since its release in 2016, the global phenomenon Stranger Things has garnered over 65 award wins and 175 award nominations, including those from the Emmys, Golden Globes, Grammys, SAG, DGA, PGA, WGA, BAFTA, a Peabody Award, AFI Program of the Year, the People’s Choice Awards, MTV Movie & TV Awards, Teen Choice Awards, and many others. The three-time Emmy nominee for Best Drama is one of Netflix’s most-watched titles, with Season 3 amassing 582 million view hours ranking as the second most popular English-language series in the Netflix Top 10, and Season 2 accounting for 427 million view hours ranking at #10. Stranger Things was created by The Duffer Brothers and is produced by Monkey Massacre Productions & 21 Laps Entertainment. The Duffer Brothers serve as executive producers on the series, alongside Shawn Levy and Dan Cohen of 21 Laps Entertainment, and Iain Paterson.​
​
In celebration of the return date, we’re also excited to unveil the official Season 4 key art (pictured above) and four exciting new location posters (click here to download) to represent the four locations featured in this upcoming season.​
​
Stranger Things 4 Volume 1 premieres May 27 and Volume 2 premieres July 1.​
​
'Stranger Things' Team​
[email protected]​

Even when a show drops all at once, I don't binge it.

First of all, I do other things in life besides watch TV for more than an hour or two a day. I also kind of like spreading out a show, one episode a week. HBO Max and Apple TV+ release 2 or 3 episodes at once, so people can get up and running, but then cut back to 1 per week after that. That is a good schedule for me.

Also, it helps keeps the episodes from getting spoiled. Not everyone can watch a 10 episode series in 2 weeks, much less 1 day.

But to the point, I'm excited for season 4!

Season 4 is suppose to only be 6 months later!?

I don't like that because all the kids have aged so much. Why not make it a year or 2 later? It's gonna be hard to believe these kids are really only 6 months older, especially since I just got done re-watching the first 3 seasons with my 14 year old daughter so, season 3 is pretty fresh in my mind.

Chris Will said:
Season 4 is suppose to only be 6 months later!?

I don't like that because all the kids have aged so much. Why not make it a year or 2 later? It's gonna be hard to believe these kids are really only 6 months older, especially since I just got done re-watching the first 3 seasons with my 14 year old daughter so, season 3 is pretty fresh in my mind.
Click to expand...

Nah, it's okay. Kids at that age can sprout up really quickly. It's not uncommon for them to grow 3 inches in a year.

Chris Will said:
Season 4 is suppose to only be 6 months later!?

I don't like that because all the kids have aged so much. Why not make it a year or 2 later? It's gonna be hard to believe these kids are really only 6 months older, especially since I just got done re-watching the first 3 seasons with my 14 year old daughter so, season 3 is pretty fresh in my mind.
Click to expand...

What the realtors in Hawkins, Indiana don't tell you is that the cosmic radiation leaking out of Hawkins Lab from where they tore a dimensional hole causes everybody to age 2-3 times faster...

Steve (Joe Keery), Eddie (Joseph Quinn), Nancy (Natalia Dyer) and Robin (Maya Hawke) might just be in over their heads.

Introducing the official dream team of Robin and Nancy.

Joyce (Winona Ryder) and Murray (Brett Gelman) look chilly — and worried — in the snow. Perhaps it has something to do with the crashed plane behind them?


Netflix Press Release said:
Each day brings us closer and closer to the release of Stranger Things Season 4. In case you’ve been living in the Upside Down and missed the announcement earlier this spring, the fourth season will be broken up into two parts, making it the biggest and boldest installment of the series yet. Volume 1 makes its debut on May 27, with Volume 2 following on July 1.

As the Duffer brothers previously revealed, Season 4 will find our favorite characters scattered throughout four different — but equally creepy — locations around the world, from snowy Russia to sunny California. Eleven (Millie Bobby Brown), Mike (Finn Wolfhard) and the rest of the crew will have to work together to defeat an even more vicious supernatural force and put a stop to the Upside Down once and for all.

In a forthcoming episode of the next season of the podcast Present Company With Krista Smith, the Duffer brothers hinted that fans have much to look forward to when Stranger Things returns in May. “I think they’ll be happy when they see it. It’s very, very long, which is why it’s taking us a very long time,” Ross Duffer shared, noting that some of the fan theories he’s seen online are “startlingly” accurate — though he wouldn’t say which ones. “I’m constantly impressed with how sharp the fans are, and how quickly they’re able to put something together with very, very little information.”

Season 4, Volume 1 picks up six months after the events of Season 3, which had our heroes battling the Mind Flayer in the middle of the Starcourt Mall, as one does. And the characters have come such a long way since we first met them in Season 1, as the Duffer brothers noted in conversation with Smith, explaining that Season 4 will have a much darker, “horror movie” vibe.

“When we pitched it to Netflix all those years ago, we pitched it as the kids are...The Goonies in E.T.,” explained Ross. “That’s their storyline. And the adults are in Jaws and Close Encounters and then the teens are in Nightmare on Elm Street or Halloween. But, this year, we don’t have the kids. We can’t do The Goonies anymore. And so, suddenly, we’re leaning much harder into that horror movie territory that we love. It was fun to make that change.”

If you just can’t wait for the next meeting of the Dungeons & Dragons Club, check out these first-look photos at the next installment of Stranger Things — and then be sure to assemble your own Demogorgon-fighting crew accordingly. Season 4, Volume 1 drops May 27.
Click to expand...

Something is dropping tomorrow

In the trailer they don't spoil the creature and don't show it completely and yet the thumbnail for the video spoil it completly! You don't even have to play the video!