And the phenomenon of NCIS rolls on and on. Having now completed its eleventh season, the crime procedural behemoth of CBS’ entire primetime schedule seems to be gaining popularity with each passing season and was recently named the most popular series in the world based on its international ratings. It has for the last six seasons been the highest rated scripted drama on television, and even its reruns out rate many shows on other networks during their original airings. Despite a shocking loss of one of its long-time season regulars and the insertion of a few new faces into the familiar cast of actors, the show didn’t miss a beat delivering one of its strongest seasons with very few lesser episodes. 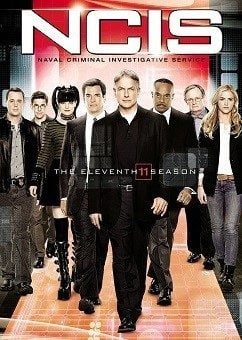 three slimline cases in a slipcase

Change was the watchword for much of this season’s long-range narratives. With eight-year veteran Cote de Pablo (Ziva David) deciding just a few weeks before shooting for the season began that she wasn’t coming back, the program’s showrunner and his writing staff had their work cut out for them in redressing already mapped-out episodes to be without one of the team’s strongest and most reliable members. To their credit, the revamped episodes gave the character of Ziva a graceful exit from the series (accomplished in the first two episodes) before moving on with new adventures with just the naval investigative service’s Jethro Gibbs (Mark Harmon), Tony DiNozzo (Michael Weatherly), and Tim McGee (Sean Murray) as the investigators and are none the weaker for the loss of Ziva. With a few ringers tossed into the empty slot for a few weeks, the producers finally settled on Emily Wickersham playing NSA analyst Ellie Bishop as the permanent replacement. For three weeks a guest star splitting time between the NSA and NCIS, she was made a series regular very quickly and thus became a permanent member of the team as the quirky, young married analyst and its latest “probie.”More changes were afoot. McGee was given a love interest this season with DOD investigator Delilah Fielding (Margo Harshman) though her chemistry with co-star Sean Murray seemed lacking, and it was no surprise that she was sent off to Dubai by the end of the season. The show spent more than half of the season wrapping up last season’s terrorist bombing by Benham Parsa (Karan Oberoi) also ridding itself of the irritating presence from last season of Colin Hanks’ DOD Inspector Parsons. With the Secretary of the Navy killed at the end of last season, the new SECNAV is played now by Leslie Hope who appeared in a handful of early season episodes. Two late season episodes (“Crescent City” parts one and two) served as a backdoor pilot for an NCIS spinoff series set in New Orleans (Scott Bakula, Lucas Black, and CCH Pounder made for a most likable combination) and which will follow NCIS on Tuesdays this fall. And the series bade another good-bye to a beloved character – Gibbs’ father Jackson (Ralph Waite) who had starred in one of the season’s most heartfelt episodes “Better Angels” but who died later in the season was given a sweet sendoff in the season finale “Honor Thy Father” which, to the show’s credit, didn’t even contain a cliffhanger for the writers to get out of for next season.With most episodes being closed ended affairs, there were only a couple of clunkers all season. The worst offender was a broadly based, almost cartoony reintroduction of Gibbs’ ex-wife (Melinda McGraw) trying a reconciliation not with Gibbs but with her other ex-husband FBI senior field agent Tobias Fornell (Joe Spano) while cheating on him at the same time with a murder suspect. Robert Wagner's return for the show's 250th episode wasn't particularly memorable and oftentimes just irritating. And “Alibi” unfortunately dipped into the Strangers on a Train well one too often. But regulars Michael Weatherly and Sean Murray each had a standout episode this season. For Weatherly it was the exciting “The Admiral’s Daughter” as he tries to rescue an irresponsible young lady from Marseille with the French police hot on their tails on a trumped-up murder charge while Murray shown brightly doing undercover work as a homeless man in “Shooter.” All of the other series regulars, forensics specialist Abby Sciuto (Pauley Perrette), NCIS head Leon Vance (Rocky Carroll), medical examiner Dr. Donald "Ducky" Mallard (David McCallum) and his assistant Jimmy Palmer (Brian Dietzen) get their own spotlight episodes with Palmer’s season-long journey toward fatherhood being the most memorable.The following are the twenty-four episodes contained on six discs in this season eleven set. The names in parentheses refer to the participants in the audio commentary available for that episode.1 – Whiskey Tango Foxtrot2 – Past, Present, and Future (actor Michael Weatherly, writers Scott Williams and Gina Monreal, director James Whitmore, Jr.)3 – Under the Radar4 – Anonymous Was a Woman5 – Once a Crook6 – Oil & Water7 – Better Angels8 – Alibi9 – Gut Check10 – Devil’s Triad11 – Homesick12 – Kill Chain13 – Double Back14 – Monsters and Men15 – Bulletproof16 – Dressed to Kill17 – Rock and a Hard Place18 – Crescent City Part I (actor Mark Harmon, producer Gary Glasberg)19 – Crescent City Part II20 – Page Not Found21 – Alleged22 – Shooter (actors Pauley Perrette, Sean Murray, writer Frank Cardea)23 – The Admiral’s Daughter24 – Honor Thy Father

The program is presented at 1080i on the network broadcasts, and these downconverted 1.78:1 transfers are anamorphically enhanced for widescreen televisions. The show switched to digital production a few seasons ago, but the image has maintained its slightly soft-focused, slightly diffused color, and slightly milky contrast look even when going from film to digital. The picture quality is perfectly pleasing and similar to the network broadcasts, but it’s never going to have the crystal clarity or eye-popping color values of other primetime series. Flesh tones are natural, and black levels are all nicely rendered. Each episode has been divided into 7 chapters.

The Dolby Digital 5.1 audio track (there is also a Dolby 2.0 stereo surround track available for each episode) does not take full advantage of the available channels for this action-oriented series. Music by Bruce Kirk in each episode seems to be the most frequent occupant of the front and rear channels as the score is generously spread through the soundstage, but ambient sound effects don’t often get the full surround treatment though when explosions hit, they hit with real impact. Dialogue, an important aspect of this crime procedural, is always well recorded and has been placed firmly in the center channel.

Audio Commentaries: there are three available this season (see above episode list for details). The best is the one by Michael Weatherly who contrary to previous years when he joked his way through an episode this time asks the writers and directors questions about their decisions in fashioning the episode which makes for a very informative look at the creative process.Celebrating 250 (3:49): a behind-the-scenes look at the cast and crew party for the show’s 250th episode (which guest starred Robert Wagner returning as Tony’s father).NCIS in New Orleans (15:27): behind-the-scenes interviews with producer Gary Glasberg, actors Mark Harmon and Scott Bakula as they go on location to film the backdoor pilot for NCIS: New Orleans. Supervising producer Avery Dreive and director of photography William Webb comment on the adjustments needing to be made for filming on location there.Game Change (23:57): a comprehensive discussion of the seismic shift in the workload brought on by the exit for Cote de Pablo from the series and the search for a replacement for the empty desk. Producer Gary Glasberg and actors Mark Harmon, Michael Weatherly, Pauley Perrette, David McCallum, Rocky Carroll, and Emily Wickersham all add comments.Remembering Jackson Gibbs: A Tribute to Ralph Waite (5:20): cast and crew celebrate the professionalism of actor Ralph Waite who died during the season.On the Record (5:55): Michael Weatherly and Pauley Perrette each are shown singing songs they composed for use on the show.Finding Ellie Bishop (7:45): brief clips from Emily Wickersham’s screen tests for the replacement role of Ellie Bishop are shown and praised by producers Chas. Floyd Johnson and Gary Glasberg along with comments from Mark Harmon and Emily Wickersham.In the Stills of the Night (3:22): brief interview with crew members who take the many still shots used on the plasma screens, in photos, and on posters used on the show.Background Check (4:22): a tribute to the background actors who appear in every episode. Second assistant director Stephen Hacker and player Ralph Tate comment on what it takes to get the job done.Joe Spano: Fornell for Real (6:11) the actor explains his enjoyment of appearing on the series echoed by actors Mark Harmon, Pauley Perrette, Rocky Carroll, and producer Gary Glasberg.

Surprising for a show this long in its run, NCIS showed remarkable freshness and vitality even with its major cast shake-ups and offered an excellent run of intriguing mysteries in its eleventh season. The show looks more than decent on DVD (the high definition broadcasts are nothing to write home about) with the sound accurately conveying what is heard on its weekly broadcasts. Recommended!

One of the few shows I watch faithfully each week as it airs.

I think NCIS jumped the shark a few seasons ago, but my wife still loves it. I prefer the L.A. version now.

Back around season eight with the long arc with the Port-to-Port Killer and the two competing NCIS teams, I might have agreed with you, but the show has gotten better again since that rather tedious season.

Matt, the other thing that drives me up the wall about the show is the soft video quality to which you allude in your review. In the early seasons, they kept the show too dark with the color somewhat overly saturated. At some point, they went with what I like to call "the Gibbs filter", which I have always assumed was to keep Mark Harmon looking younger. Now that the entire cast is getting longer in the tooth, it seems that the diffuse look has gotten worse. It is all the more striking when the L.A. show comes on immediately afterward with crystal clarity. It seems to me a hi-def show should not look like a VHS from the 80's (or the Blu-ray of Marnie).

I wish they would dispense with the long story lines. In addition to the Port-to-port killer, I grew tired of Harper Dearing, a villain who reached James Bond villain dimensions, and the story line about the guy who was doing the background checks on the team.

Watching some NCIS on CBS action tonight, where letter is sent to office that goes off and everyone wearing contamination suits.
You must log in or register to reply here.