CBS’ highest rated new show of the 2014-2015 season was NCIS: New Orleans, an entertaining if very familiar spin-off of the network’s most popular drama NCIS. Set in The Big Easy with an ingratiating cast of characters and featuring much of what makes the port city so special (the show is actually filmed in New Orleans rather than having Los Angeles backlots and locations sub for it), NCIS: New Orleans may not have established anything particularly new or fresh with the procedural genre, but the odds are if you like the mothership, you’re going to like this offshoot as it’s much more patterned after the original than the first spin-off NCIS: Los Angeles was. 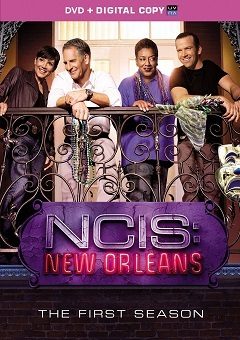 Amaray case in a slipcase

With the Navy an important part of one of America’s most important Gulf port cities, the local office of NCIS is headed by Dwayne Pride (Scott Bakula), a veteran of the agency. His second in command for the past ten years has been good ol’ Alabama boy Christopher LaSalle (Lucas Black) while new transferee from Detriot is Meredith Brody (Zoe McLellan) who spends quite a few early episodes acclimating herself to the city’s rich offerings. As the agency’s three special agents, they investigate the murders, kidnappings, smugglings, and other nefarious activities involving Navy personnel in the Big Easy assisted by forensics lab tech Sebastian Lund (Rob Kerkovich) and medical examiner Dr. Loretta Wade (CCH Pounder). During the course of the season, a couple of other recurring characters install themselves into the family (and have been named as regulars for the show’s second season): computer hacker Patton Plame (Daryl Mitchell) and ATF undercover agent Sonja Percy (Shalita Grant) who has tired of the grind of working alone and incognito and longs to become a part of a team again.

While the actual cases themselves on the whole are solid if relatively unexceptional, a few episodes do stand out from the first season, and all of them incorporate the aura of New Orleans beautifully including its food, its music, and some of its famous locales, whether it be the French Quarter, the cemeteries, the bayou, the riverbanks, or the Garden District. An outbreak of bubonic plague threatens to bring the city to a standstill in “Carrier,” but assistance from Washington’s NCIS office (which allows guest appearances by Michael Weatherly, David McCallum, Pauley Perrette, and Rocky Carroll, some of whom had first-hand experience with the plague before) assist. Seasonal episodes celebrating Halloween, Thanksgiving, and Christmas offer great opportunities to delve into the backstories of several of the regulars (the veteran writers and producers from the mothership have learned how much fans want to know about the personal lives of the characters, so instead of the producers waiting several seasons to examine their personal issues, we get in the first season Pride’s shaky marriage, daughter issues, and leftover resentment from an outlaw father (Stacy Keach in several appearances), LaSalle’s dilemmas with his older brother’s (Clayne Crawford) bipolar disorder and a high school sweetheart (Gillian Alexy) who rejoins his life, and Brody’s ex-fiancé who turns up in one episode to woo her again: all figuring into holiday episodes and other stories. “The Walking Dead” borrows its plot from the classic noir D.O.A. as a military vet poisoned by radiation and with only two weeks to live asks for the team’s help in finding his killer. “The Insider” finds Loretta and Sebastian held hostage in a tense standoff between NCIS who want to assure its people are safe and other federal agencies who want to shoot first and ask questions later. The season’s big bad guy is a longtime nemesis for Pride: Paul Jenks (John Livingston) whom he’s nicknamed Baitfish. The search for him and his ties to a reemergence of the Broussard crime family promise plenty of death and destruction in the show’s climactic few episodes. Kudos to the writers, however, for not following the usual cliché of ending the season with an outrageous cliffhanger.

Scott Bakula’s presence and likability factor make him a firm anchor for the show even if a Cajun-styled accent he attempts in early episodes rather comes and goes as the spirit moves him. The accent is certainly genuine with real life Alabama boy Lucas Black, and his combination of easy humor and intense action makes him a good fit for the show even if his character, who supposedly graduated Magna Cum Laude with a 3.7 GPA, makes an unconscionable number of grammatical errors as he expresses himself throughout the season. Zoe McLellan has only begun adding some colors to her rather white bread personality so far, but future seasons should allow her to extend and deepen her character. The wonderful CCH Pounder is always a welcome presence in any role, and she’s certainly welcome here as the plain-talking, quick quipping medical examiner. Rob Kerkovich gets the geek/eccentric comic role and is as fine a male substitute for the mothership’s Abby Sciuto as anyone could be. The writers have tried to establish a rather tiresome rivalry between Rob’s Sebastian and Daryl Mitchell’s wise-acre Patton as they strive for tech supremacy, but Mitchell’s unconvincing performance as a computer whiz needs more work before he can begin to match wits with Kerkovich’s much more interesting and entertaining nerd. Making five appearances throughout the season as something of a man of mystery is Steven Weber as city councilman Douglas Hamilton.

Here are the twenty-three episodes contained on six DVDs in this first season set:

The program is broadcast on CBS in 1080i resolution, and this downconverted 480p transfer at the widescreen television aspect ratio of 1.78:1 looks as good as it possibly can. Unlike the mothership which uses diffusion filters and desaturated color, this show offers clear, crisp photography (except for occasional glamour shots for Zoe McLellan) which brings out the wonderful New Orleans locations with outstanding detail. Color values are excellent, too, with rich hues and realistic and appealing skin tones. Black levels are very good indeed. Only the occasional glimpses of moiré patterns and some aliasing in tight line structures spoil otherwise pristine transfers. The episodes have been divided into 7 chapters.

The disc offers both Dolby Digital 2.0 stereo surround and 5.1 surround mixes, and both present effective and enveloping audio design. Dialogue is crucial to the show, and here it’s been recorded effectively and has been placed in the center channel. Music by Brian Kirk along with various jazz, Dixieland, and marching bands fills the fronts and rears with arresting, scene-setting music. Ambient effects are also nicely placed when appropriate, and explosions have a tremendous kick to them.

A note: the music used in the main menus on all six discs is at system-threatening levels of volume, so let the buyer beware.

Deleted/Extended Scenes: six scenes scattered over the six discs in the set have been paired with the episodes from which they were excised.

“Crescent City, Parts I and II”: the backdoor pilot for the series that aired during the 2013-2014 season of NCIS.

Launch Promos (4:17): four promos of differing lengths used by CBS to launch the show prior to its premiere.

Spooktacular (5:09): producer Jeffrey Lieber introduces costume designer Ann Walters who then both talk about the planning and execution of the Halloween episode “Master of Horror.” Actress Zoe McLellan also comments on the fun of putting the show together.

Mardi Gras: The NCIS Way (4:45): producers Gary Glasberg, Jeffrey Lieber, James Hayman, and Joseph Zolfo talk about how the show staged Mardi Gras themselves before the actual event and how the massive undertaking was pulled off.

After the Storm (5:54): producers Jeffrey Lieber, James Hayman, Joseph Zolfo, writer Laurie Arent, and star Scott Bakula discuss the devastation of Katrina which gets captured in imagery as the show films around the city on location shoots and is shown specifically in the episode “The List.”

Starting Up in New Orleans (14:07): producers Gary Glasberg, Jeffrey Lieber, Joseph Zolfo, production designer Victoria Paul, cinematographer Gordon Lonsdale, and actors Scott Bakula and CCH Pounder comment on the excitement of actually filming the series on location and the way the city has embraced their efforts.

A Big Easy Success (30:04): producers Mark Harmon, Gary Glasberg, and Jeffrey Lieber praise the work of their core cast, all of whom have sound bites to add about their characters and the past season. Also praised are director of photography Gordon Lonsdale and costume designer Ann Walters.

How Rob Got the Job (3:58): actor Rob Kerkovich describes his audition for the role of Sebastian Lund and his uncertainty if he got the part or if the show would run necessitating relocating to New Orleans from Los Angeles with his wife and new baby.

Touring the Sets (4:47): production designer Victoria Paul takes us through the major sets for the show.

The Write Angle (21:30): producer Jeffrey Lieber introduces us to the writers’ room where they are currently mapping out episode 121 “You’ll Do.”

Yes, NCIS: New Orleans is another in the long line of CBS procedural successes, and the combination of secure storytelling, interesting characters, and a fascinating location make it the broadcast equivalent of delicious comfort food. Recommended for those who simply like to settle back for a weekly whodunit that isn’t too taxing on the brain.

"I'll get a cast made of those treads" -- Lucas Black

It seems strange that this isn't coming to Blu-ray, when Season 12 of the original is. And CBS is not totally averse to BD for new shows this year, because Scorpion, which put me off thanks to its irritating "geniuses" advertisements, is getting a BD release for its first season. Of the three shows, it seems like NCIS: NO would be the locgical Blu-ray choice, but I guess that's why I don't work at CBS...

Love NCIS, but this show just drives me crazy. The one character with the Alabama accent just pushes me over the edge. I'd rather listen to fingernails on a chalkboard than his voice.

Kind of like CSI Miami. David Caruso was incredibly annoying.