The four episodes included in Mystery Science Theater 3000: Volume XXXII may not be bright spots from the series ten year run, but are enjoyable in their own right: Space Travelers (aka Marooned), Hercules, Radar Secret Service, and San Francisco International. 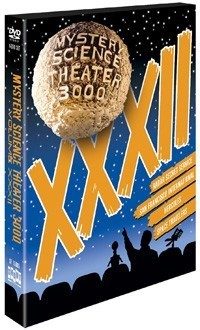 In the not too distant future, somewhere in time and space.....


For this 32nd volume, we still get two “Joel” and two “Mike” episodes, but all four come from the Comedy Central era. First up is Experiment #401, a movie that Columbia Pictures (possibly unwittingly) sold off to Film Ventures International (the folks who brought us Pod People and Cave Dwellers), the Oscar-winning Marooned, which FVI renamed Space Travellers after jettisoning the opening and ending credit sequences. The film stars Gregory Peck, Richard Crenna, a very young Gene Hackman, David Jansen, James Franciscus, Lee Grant, and Mariette Hartley in a drama about a group of astronauts who find themselves trapped in space when the rockets on their capsule fail to fire to place them in an orbit to return to Earth. I remember seeing this film in elementary school many times while growing up, and it is still a pretty darn good movie with award-winning effects that still hold up today. And that makes this a fairly tough film to riff on, with Joel and the ‘bots resorting to impressions of Gregory Peck, references to The Fugitive when David Jansen appears, and jokes about how great an actor Gene Hackman is. Host segments include The Great Crowdini, an invention exchange (Joel’s the “Dollaroid” and the Mads facial tissue), space race advancements, a scene re-enactment with Crow playing the Gregory Peck character, Magic Fun, and viewer mail.

Experiment #502, Hercules, was the first film in the franchise, but the last one riffed on the show. Steve Reeves plays the title character in this Italian import brought to the US and re-dubbed (badly) in English by theater owner and film distributor Joseph E. Levine, who managed to milk every last nickel out of the box office thanks to a successful ad campaign. The movie is a mess, with major plot holes and goofy dialogue, and although filmed in the 2.35:1 aspect ratio, the company responsible for the video transfer never even bother to pan or scan the camera, leaving it dead center of the frame throughout. This helps Joel and the ‘bots with the riffing with the familiar “Who’s talking?” joke that often accompanies poorly transferred widescreen films on the show, as well as trying to make sense of the incomprehensible plot. The host segments are hit and miss, missing entirely on the opening “winging it” sketch, coming close with the invention exchange (the Mads cellular desk, Joel’s “Instant Karma”), hitting a double with Tom’s updated constellations, striking out with Joel’s story about Hamilton Joe Frank and Reynolds, striking out again with Crow hosting Match Game, and ending with a ground rule double with Joel and the ‘bots discussing Amazons (only to have some call in on the hexfield) and Frank takes over the cellular desk.

Next up is Experiment #520, Radar Secret Service, an episode where, unfortunately, the preceding short is funnier than the feature. The short, Last Clear Chance, is a scare tactic film from Union Pacific about traffic safety and the risks of not obeying railroad signs. The riffs here are pretty good, and the short is very predictable as to where it is eventually headed. The same cannot be said of the feature, the dry and dull Robert L. Lippert programmer Radar Secret Service, where G-Men use radar to track and eventually capture a group of criminals who have stolen a shipment of Uranium-238. Somehow, the radar waves have a built-in camera, because they are able to watch what the radar is tracking on a TV screen. Mike and the ‘bots do the best they can with riffing on the film, but since very little happens (and both the G-Men and the criminals look way too similar), there really isn’t much material here. The host segments are average, with the invention exchange all but forgotten with Mike planning to escape the SOL while the Mads discuss “Hypno-helio-static-stasis,” State Trooper Tom Servo sums up the short with his “Why Don’t They Look” speech, the ‘bots throw Mike a 10-year high school reunion, Mike and Crow build a miniature Quinn Martin Nature Preserve, and the Mads are defeated by “Ecstato-euphoro-fun (with patented Hinder 90).”

Finally, Experiment #614 features the TV pilot movie San Francisco International, with Pernell Roberts as the head of SFO Airport (Lloyd Bridges replaced him when the pilot was picked up as a series), who has to help a young boy land a small plane he stole out of rebellion to his parents’ impending divorce, and recover a large sum of money stolen from a plane by Tab Hunter. This is your typical 1970s prime time hour-long soap opera, making great fodder for Mike and the ‘bots, who manage to make riffs on Pernell Roberts’ other television series (Bonanza, Trapper John MD), as well as riffs on the many guest stars that included Clu Gulager, Van Johnson, David Hartman, Dana Elcar, and Tab Hunter, in addition to riffing on the popular Airport movies on the 1970s. The host segments are rather bland, the funniest being the first (the Mads playing shirtless contractors) and last (Dr’ F’s increasingly growing and hairy ears), but the middle three segments consist of Mike’s impression of Urkel (remember him) that goes on for far too long until Torgo arrives to break up the insanity.

As I’ve stated in my previous reviews of these sets, judging the video quality of an episode of MST3K is difficult. The movies are usually in fairly bad shape (especially Hercules), with sub-par transfers that the series’ producers had to contend with.

The only fair thing to do is to judge the host segments, and the quality improves as you get later into the series. Discs one and two have some minor softness to it, but colors are consistent. The remaining discs are excellent, with increased detail and well-defined colors. Throughout all four discs, however, there are some brief minor anomalies inherent in the broadcast masters, such as dropouts, but these are few and far between.

As with Shout! Factory’s other MST3K boxed sets, the menu designs on each disc are themed with the episode, with decent CG animation, and are very funny. Also included in the set are a set of original comic book style mini-posters for each episode, identical to the DVD covers, created by Steve Vance. All four discs come housed in THIN-Pak keepcases inside a paperboard sleeve.

Disc One (Space Travelers):
Intro by Frank Conniff (3:51): TV’s Frank discusses the mixed feelings he has about riffing Marooned, and is still somewhat perplexed as to how or why Columbia Pictures sold the film off to an outfit like Film Ventures International.

Disc Two (Hercules):
Intro by Frank Conniff (3:02): TV’s Frank discusses the film’s large budget, production values, and art design, and how it was a departure for the series.

Barnum of Baltimore: The Early Films of Joseph E. Levine (7:23): A look at the early film career of former theater owner and Avco-Embassy owner Joseph E. Levine, the man who brought Godzilla and Hercules to America, and produced films ranging in quality from Santa Claus Conquers the Martians to The Graduate.

Disc Three (Radar Secret Service):
Intro by Frank Conniff (3:38): TV’s Frank discusses how they had high hopes back in Season Two of riffing the movie, only to find out that they couldn’t get the rights at that time, and how once they did acquire the rights during Season Five, realized what a dull movie it really was.

MST-UK with Trace & Frank (19:50): A home-made documentary on Trace and Frank’s crowd-funded trip to Sci-Fi-London.

Disc Four (San Francisco International):
Sampo Speaks! A Brief History of Satellite News (7:29): Chris “Sampo” Cornell, one of the creators of the fan site mst3kinfo.com (also known as Satellite News), discusses how he became a fan of the show and how Best Brains passed the torch to him and Brian Henry to continue as the officiaol fan website for MST3K.

This 32nd volume of episodes gives fans a selection of episodes many thought would never make it to DVD, but no real standouts are provided this time out (with the possible exception of Hercules). The special features are about what we’ve come to expect from Shout! Factory on MST3K sets.

Not to pick a nit, but they did the menus with actual puppets of Tom and Crow, (although smaller than their tv counterparts) instead of CGI this time out. The one for San Francisco International really cracked me up.
You must log in or register to reply here.